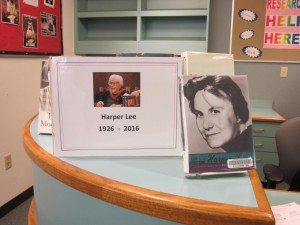 When she learned of Harper Lee’s death last Friday, February 19, 2016, Connie James-Jenkin, IMSA’s IRC Collection Development and Reference Librarian, put together a display that includes Ms. Lee’s iconic novel about race in America, “To Kill a Mockingbird,” “Go Set a Watchman,” which was released last year, and a biography that provides insight into the famously reclusive author. There is also a DVD of the movie that was made from the novel, “To Kill a Mockingbird.” All items on display can be checked out.

Ms. Lee, who died at age 89, had been in the news last year when “Go Set a Watchman” was published. There was some controversy over whether or not the book, which has been called an earlier draft of “To Kill a Mockingbird,” should have been published. Questions were raised about whether an ailing Harper Lee had been manipulated into releasing a manuscript she had abandoned years ago.

Ms. Lee’s older sister, who was an attorney, protected her for much of her life after she retired from the public eye following publication of her popular book, “To Kill a Mockingbird.” Ms. Lee rarely gave interviews and preferred to live a quiet life in both her small hometown in Alabama and New York City. In later years, she spent all her time in Alabama, surrounded by long time friends and local residents who protected her privacy from outside interest.

The display will remain on the reference desk until this Friday, February 26, 2015.