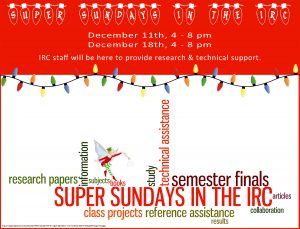 There are two more chances to spend Sunday afternoons into the evening in the IRC during December: Sunday, December 11, 2016 and Sunday, December 18, 2016. The IRC will be open from 4:00 p.m. until 8:00 p.m. on both Sundays, and students are welcome to spend time in the library working on homework papers or projects, researching or relaxing. Books, magazines, DVDs and CDs can be checked out while the IRC is open these two Sundays.

An IRC team member will be in the IRC to help with research or technology questions, so come spend some time in the IRC before winter break. 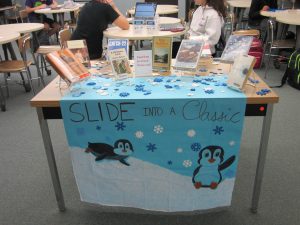 The long winter break is an ideal time to immerse yourself in a good classic novel, and IMSA student May Kaur has created an enticing display which will tempt the most reluctant reader to sit down with a good book.

The selection of diverse books on display will take you away to another time or place. Curl up with a good book during the break, and experience something new and different.

All items on the display can be checked out during the winter break. Please ask an IRC staffer for help if you have any questions. 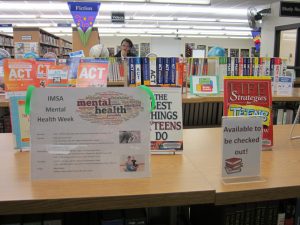 The Student Council’s annual Mental Health Initiative Week is November 28 – December 2, 2016, and books and dvds addressing mental health issues are on display in the IRC and available for checkout. 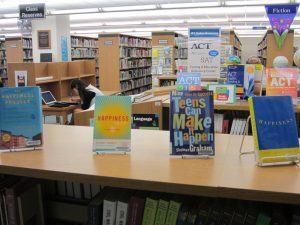 Madison Dong, Student Council President, sent out an email with a schedule of the week’s events, which includes activities and seminars that can help students identify mental health issues. The books and dvds on display in the reference area of the IRC can supplement these activities. If any of the weekly activities spark an interest, please stop by the IRC to check out resources that can help you explore mental health issues. 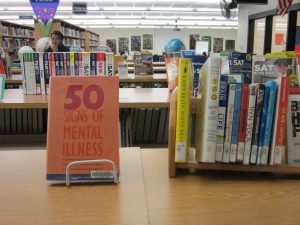 The following are the events listed in Madison Dong’s email:

Today (Monday) at midday in the Old Caf we will be giving out wristbands
and explaining the purpose of the week. After school from 4:30 – 5:30 in
E121 will be therapy dogs and a school counselor meet and greet.

Tuesday at midday will be an activity for people to mark how stressed they
are, what their stressors are, and how they can relieve stress. From 6-7
in IN2, there will also be a presentation by a clinical psychologist on
performance and perfectionism.

Wednesday, from 4 – 5:30 in IN2, there will be a presentation by the
National Alliance for Mental Illness, and from 4:15 – 5:15 in the TV pit,
there will be a writing workshop by some of the English faculty.

Thursday from 7-8 in the Old Caf will be a forum with 2 IMSA alumni in
mental health professions. They will answer questions on depression and
anxiety and discuss their own IMSA experiences as well.

Finally, on Friday, we encourage everyone to wear green! At midday, anyone
can come to make an origami crane and write a wish on it. We will collect
cranes and put them up for display after the week.

Please ask any IRC staffer for help if you have questions. 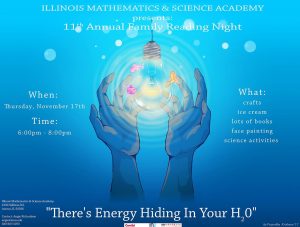 The 11th Annual Family Reading Night at the Illinois Mathematics and Science Academy is scheduled for Thursday evening, November 17, 2016 from 6:00 p.m. until 8 p.m.

This year’s theme is “There’s Energy Hiding in Your H20,” and the event is sponsored by IN2/ComEd. Families in the Aurora area will get together at IMSA for an evening of story time, crafts, science and just plain fun!

Last year over 150 grade school students and parent(s) from Aurora school districts 129 and 131 were excited to attend.

Every child in attendance will receive a book, a t-shirt, a backpack, candy and a water bottle. Oberweis Dairy of North Aurora provides an ice cream treat for each attendee. The Aurora Public Library and SciTech also participate in the nights festivities.

Parents can take a tour of the school or hear about other programs offered at IMSA.

To attend Family Reading Night, students must pre-register. Please contact Angela Richardson @ 630.907.5075 or angie@imsa.edu for more information or to register. 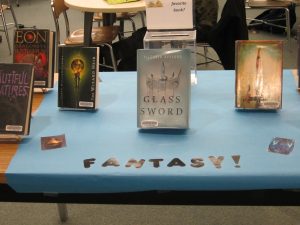 IMSA Sophmore Miriam Francis has set up a display of fantasy books on the table near the Reference Desk in the IRC. One of Miriam’s favorite genres is fantasy, and she has created this display to share her interest with others at IMSA.

People can share their favorite books with others by writing the title and author of a book they recommend and dropping it into the box on the fantasy books display table.

All books in the display can be checked out of the IRC. 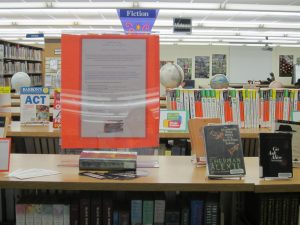 Banned Books Week is an annual event celebrating the freedom to read. This week highlights the value of free and open access to information. Banned Books Week brings together the entire book community — librarians, booksellers, publishers, journalists, teachers, and readers of all types — in shared support of the freedom to seek and to express ideas, even those some consider unorthodox or unpopular. 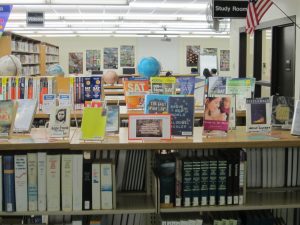 By focusing on efforts across the country to remove or restrict access to books, Banned Books Week draws national attention to the harms of censorship.

This year we have set up the Banned Books display a little early so that we have plenty of time to bring attention to this issue. The books featured in the display have all been targeted with removal or restrictions in libraries and schools around the country. 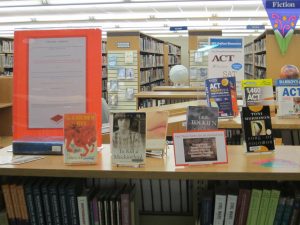 While books have been and continue to be banned, part of the Banned Books Week celebration is the fact that, in a majority of cases, the books have remained available. This happens because of the efforts of librarians, teachers, students, and community members who stand up and speak out for the freedom to read. As part of the display, we have included a poster with suggestions for getting involved.

All the books in the display can be checked out. 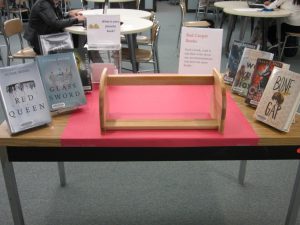 Urvi set up the display shown above in the IRC to help get the process started. She hopes readers will pick their favorite book from the display or the library shelves and write down recommendations of books they’ve enjoyed.

If the books that are recommended are part of the IRC’s collection, they’ll be put on the shelf in the display, and any reader can check them out.

Any of the books on the display can be checked out.

The Student Maker Squad and IRC staff invite all who are interested to stop by the IRC to learn about the new zSpace Virtual Reality tablets from 3:30 p.m. until 5:30 p.m. on Tuesday, August 30, 2016,

People who stop by will be able to use simulation to “build a prosthetic are, dissect a human heart or design and customize an electronic circuit.” The presentation will show some of what’s possible with virtual reality and new technology. 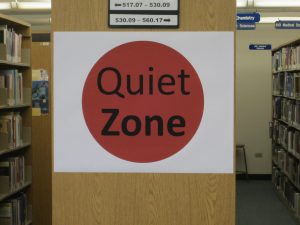 As the new school year gets underway, returning students will notice some changes, both in the physical surroundings and faculty and staff. One of the changes is that the library is now a Quiet Zone.
In an effort to support students who want to study in the IRC, everyone must now be quiet in the main area of the library, where numerous “Quiet Zone” signs are now posted.
Students who wish to study with others or need to discuss a project or paper, should head to the back of the library where the printers are, to talk quietly among themselves.
There is a Group Study Room, which students can reserve. Please ask a library staff member for the sign up sheet to reserve the Group Study Room.
In recent years, there have been frequent comments on the annual IRC survey about noise in the IRC. Please be respectful to classmates who have come to IRC to study and be quiet while you are here or go to a public area outside the library to talk freely with others.