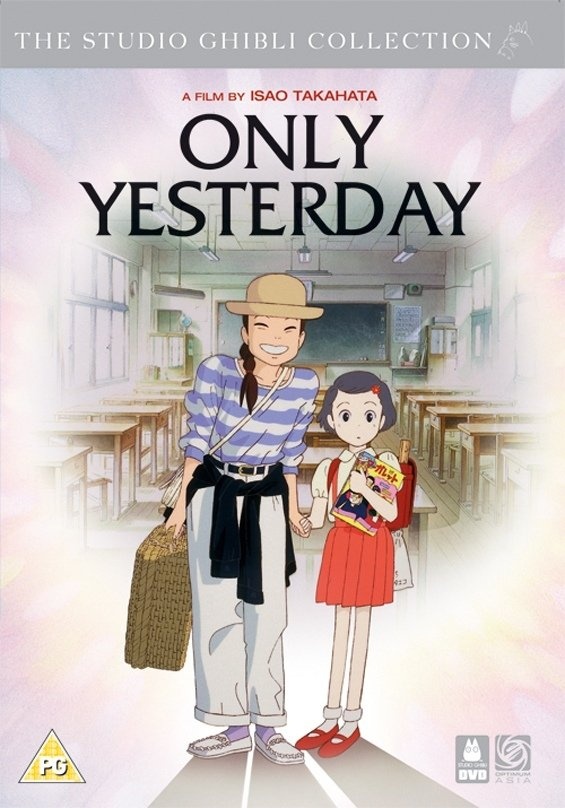 Director: Isao Takahata
Company: Studio Ghibli
(Note: While an animated feature, Only Yesterday is not directed toward children. It explores ‘the real world,’ which is outside the sphere of a typical animated movie.)
Release: July 20, 1991

Summary: The story opens in 1982, and 27-year-old Taeko is an unmarried woman who has spent her whole life in Tokyo. Because of this, she loves visiting the country to escape busy city life. Taeko decides to pay a visit to relatives in the countryside to help harvest safflower, but on the long train ride there, Taeko finds herself remembering her fifth grade self. As she learns more about farming and her brother-in-law’s family, Taeko increasingly yearns for her childhood as she struggles with ‘grown-up’ issues of balancing career and love. Past and present are wonderfully woven in this slice-of-life drama, and its quiet, human storyline truly makes an incredible watch.

Review: Studio Ghibli has brought many beloved titles including My Neighbor Totoro and Spirited Away to the silver screen, thanks to director Hayao Miyazaki. However, Ghibli’s talented animator Isao Takahata has created many moving films as well. Only Yesterday is one of these films, a story of self-realization told with honest, genuine characters.

For example, Toshio, cousin of Taeko’s brother-in-law, is earnest, goofy, and socially awkward. As for Taeko, she is kind-hearted and good-natured but realizes she has been dishonest to herself. After all, she still turns to her fifth-grade self to remind herself of who she is. Through remembering her younger days, Taeko finds not a perfect angel, but an immature girl who cries over plastic purses and fails to understand fractions. All these memories, however, are not embellished in any way. Instead, they pay close attention to her mistakes that have shaped the present-day Taeko.

Although daily life can seem mundane, the director finds a heartfelt story in even the most boring moments. In one warm and fuzzy scene, Taeko’s family buys an exotic pineapple, but no one knows how to eat it. When they finally cut the fruit, Taeko hates it and reluctantly chews with disgusted, exaggerated motions.

Overall, director Takahata is meticulously oriented to detail, so much that the characters’ emotions are revealed through their facial expressions. As for the art itself, the backgrounds are still photorealistic for today’s standards and reminiscent of watercolor paintings. The series of flashbacks and present-day sequences are animated with subtle differences and joined poetically.

The understated romance deviates from the entertainment of today, and there are several humorous moments as well. For the impatient, however, the film’s plot is tedious at times and takes its time in building up. Luckily, the ending ties up loose ends quite well, making it well worth the watch.

This feature unites family, rural life, and love together in a work of art that will definitely hit home.

Be the first to comment on "Film Review: Only Yesterday"