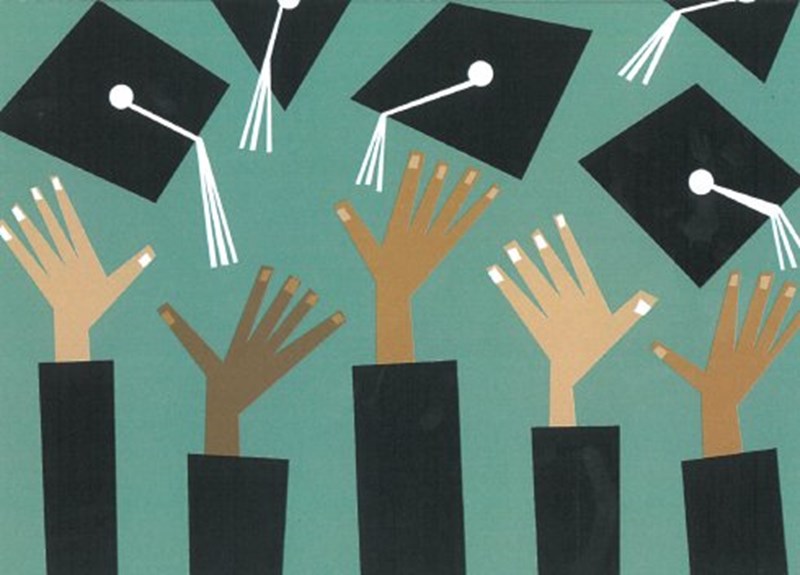 In our next installment of Seniors Speak, we have an anonymous submission that discusses happiness. What does it mean? How do we find it? Where is it at IMSA?

I’ve never been very good at giving direct advice. And even if I did, I’m sure that that advice probably wouldn’t be universally applicable anyways. So, instead, I’ll tell a story, and hope that you, the reader, may find something useful among the fragments of my experiences that I’ll share with you:

As I stared at the sheet of paper in front of me, my vision turned blurry. For a moment, I felt like I couldn’t breathe. All those formulas that I’d spent all of last night cramming had fled my mind and I was left picking at the pieces. The problems on the page were indecipherable black hieroglyphics on an expanse of white that I didn’t have the knowledge to fill.

Breathe, I told myself. But I couldn’t. And with my heart racing and my palms sweating, I scrambled to jot down anything that would make any sense at all on the page before time was called. Fifty-five minutes later, with my heart in my throat, I submitted my test knowing that I had failed.

Soon, my anxiety spread. I couldn’t fall asleep for hours. Instead, I lay in bed and held my fingers to my pulse, feeling the drumming against my fingertips. I would often feel light-headed continuously and I couldn’t concentrate.

During the next extended, I confided in my mother that I couldn’t focus. Concerned, she took me to the doctor who recommended a blood test. A week later, I stared back at the negative results, deciding whether or not to beg the doctor to try the tests again. There had to be something that was wrong with me, or else I couldn’t fix it.

My physician recommended that I go see a therapist. I never did. Nor did I bring the matter up to my parents again. I told myself that if I pretended that everything was alright, I would eventually be.

I think it’s probably important to mention here that, probably like most people, I dislike showing weakness. I’ve always had an obsession with perfection that manifested itself as superstitions when I was younger.

I don’t believe that IMSA was the impetus for my anxiety. Instead I share this story with you in the hope that you’ll learn something from my experiences.

Firstly, despite the larger awareness of mental illnesses in the IMSA community in recent years, there remains the idea that these illnesses are the fault of the afflicted. And there is also a common stigma that mental illnesses equate to personal weakness. It’s taken me a long time to learn that they are neither. And for anyone who may suffer from anxiety or depression in the present or future in any sort of form, I wanted to let you know that you’re not alone and that you’re not a weaker person for it.

Secondly, on a related note, there’s a toxic idea at IMSA that intelligence and diligence are mutually exclusive. “Gods” are people who are both brilliant and don’t try. It’s cool to do well and to get good grades. It’s not cool to try. I’ve been guilty of promoting the same idea: protesting when accused of working too hard, comparing how much time I’ve spent on assignments. I’d like to point out here that every single person attending this school is intelligent. And spending a few more hours on homework than the next person doesn’t make you stupider than them. Don’t compare yourself to others and don’t be ashamed of working hard. It will get you further in the future.

If I had to narrow down all of my future goals into a single word, it would probably be happiness. I’m guessing that most of yours probably would too.

And although I’ve realized that happiness is a mindset, I know that it can be hard to be happy in a world filled with seemingly never-ending homework and extracurriculars. And I can’t say that I’ve always been happy at IMSA—both you and I know I’d be blatantly lying. And I can’t say that I can really teach you how to always be happy, seeing that I haven’t figured it out myself yet. But I’d like to speak briefly on what IMSA has taught me.

I don’t think I have very many talents, but I do believe that I have a pretty good memory. I sometimes like to look back through my stores of memories and find reasons for how I am the way I am today in a strange Freudian sense.

I remember a day when I was seven. I was sitting in the backseat of my mom’s car coming back from swimming practice and I asked her why I did so many activities. Why couldn’t I just play around outside and go on endless play dates? We pulled into the driveway and she turned to me and told me that she wanted me to be “good at everything.” And, as I hadn’t learned how to make my own goals yet, I decided that I had to be perfect.

As I grew older, I found the need to be involved in everything. Especially junior year, when everything seemed like a competition, when I heard about the accomplishments of others, it was easy to wonder if I should be doing the same. It was even easier to put myself down. Even today, it’s hard for me to not think of life as a contest. I also believe that IMSA has changed me the most in teaching me how to be happy for others. As I clicked the log in button to my applications on April 1st while checking my phone, I realized that I wasn’t praying that I’d get in. Rather, I was desperately hoping that my friends would message me with their good news. I think that was when I realized that somewhere in the spaces between cramming history research papers and club applications during the past three years, I had actually grown.

It’s hard to believe that there is only one week left.

And although the year hasn’t ended yet, even though I proclaim to everyone that I’m “ready to move on”, I’ve been wallowing in a quiet feeling of nostalgia. As I scroll through posts on my Facebook newsfeed, it’s hard to believe that in a few months, it’ll be filled with new faces, new names. A few more months and most of these people will become strangers.

The memory is a funny thing. In the coming months, as our inboxes fill with emails not from student-ls and we stop checking IVC, we’ll close more of those memories that we’ve made over the past three years.

I’d like to think that there’s not a lot that I regret about IMSA. But I know that the things that I remember will be the little things, the crazy things, and the possibly-stupid things. The memorable things.

And, as I sit and talk with my friends, wasting away a Friday night, I close my eyes and try to preserve the moment in my mind forever because in that I moment I think maybe I have found out what it is to be happy.

Be the first to comment on "Senior Speaks: In Pursuit of Happiness"