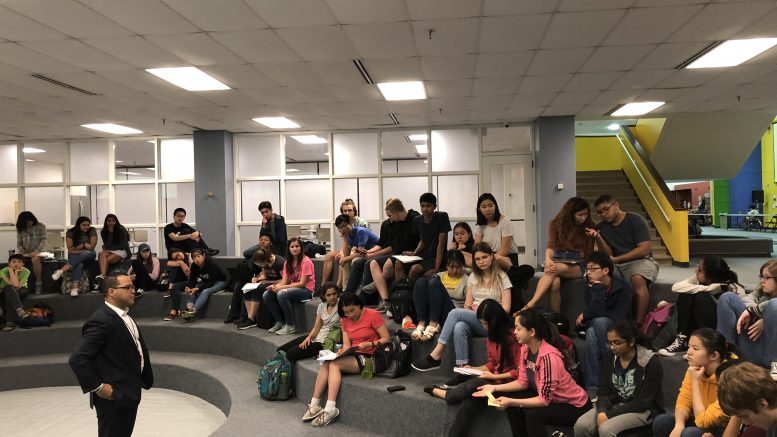 Last Monday, April 30th, IMSA’s Student Council organized a Town Hall General Assembly (GA) with IMSA President José Torres and members of administration to give the student body an opportunity to ask any questions they had about Senate Bill 2939. The bill would allow IMSA to admit ninth-graders and non-Illinois students, charging the latter $50,000 annually to attend IMSA.

The GA began with Torres establishing that profits from non-Illinois tuition would go first and foremost towards building a single new residential hall. When asked about expected changes to IMSA student life hallmarks such as RCs, wing guides and Clash of the Halls, IMSA Executive Director of Student Life Katie Berger said that she was unsure of what exactly the future would look like. However, she recognized that “the smaller wing community is important, and we want to maintain that.” Torres also made clear that diversity within the wings would still be maintained by Student Life, joking, “We’re not going to have an out-of-state wing, an Illinois students wing, a black wing…”

“Of the 1 billion people in China, we could find 150 high-schoolers who qualify, who meet our admissions requirements,” he said. “But we’re not interested in having 150 Chinese students.” To ensure continued “rich racial and ethnic diversity” in the student body, Torres reiterated his interest in attracting students from Africa, South America, and the Middle East in more or less equal percentages, depending on the demographics of the applicant pool.

As for socioeconomic diversity, Torres pointed out that NGOs may sponsor or offer scholarships to students to attend IMSA. He maintained that IMSA can reasonably charge an average of $50,000 in annual tuition for non-Illinois students, citing the example of Lake Forest Academy, a college preparatory school comparable to IMSA.

“I would put IMSA on par with any of the other boarding schools,” he said. “[Lake Forest Academy] is charging $60,000 [annual tuition]. . . I know we have a student here who went there as a ninth grader, and he said he loved the relationship he developed with a Korean student. Those are the kinds of the relationships that will be forged with these [international] students who will go to IMSA.”

Conversation then turned to the prospects of admitting a ninth grade class. Torres said that the new freshmen curriculum has yet to be determined, but that faculty had begun thinking about it. Another concern touched on immaturity issues among freshmen students, to which Torres responded that IMSA does require teacher recommendations in its admissions process. He floated the idea that admissions standards could be revised to include some way to evaluate maturity.

With an expected additional 150 students, students inquired about the possibility of teachers having increased responsibilities but lower salaries. Traci Ellis, Director of Human Resources, stated that IMSA’s latest budget request advocated for competitive faculty pay, and that IMSA’s goal to educate future global leaders will attract teachers “of a high caliber.” Ellis added that some teachers have even taken pay cuts to teach at IMSA, and Torres pointed out that “people do not come here for the money.”

Berger promised that the IMSA community would play a vital role in the plan to admit non-Illinois and ninth grade students, whether the task was revising IMSA’s curriculum or designing a new residential structure. “We’re going to dream it up!” she said enthusiastically.

Student opinions on the Town Hall were varied. Krishna Thakkar (‘20) expressed a positive sentiment towards the idea of non-Illinois students, saying that “International students would definitely have an effect on culture shows and clubs. It could give students the chance to form lasting friendships with people from halfway across the globe, which is certainly great for IMSA’s diversity cause.”

However, she felt that IMSA had a lot of work to do.

“Answers like, ‘We don’t know yet’ and, ‘We’ll have to dream that up’ were common,” Thakkar said. “I think that they were trying to…provide information while also not saying things that might end up being false or being changed in the future.”

Echoing Thakkar, Vincent McKibben (‘19) went so far as to say that “I think [the GA] was very informative in the sense that it gave us an idea of how little they actually have planned out.”

Travis Ingram (‘20) was also concerned about administrators misinterpreting questions at the GA. “For example, I had some concerns over how non-Illinois students might reduce socioeconomic diversity at IMSA…and when I asked how they planned to address that, Torres pre-empted his own response by first talking about how there’s not a lot that they could do before eventually – very far into his response! – answering the question.”

Should the bill pass, administration members were not certain that IMSA would pursue implementation. However, Chief Information Officer Lawrence Bergie said that if IMSA does begin to admit non-Illinois students, their tuition will ultimately be used “for the betterment of the academy.”

Which Hall is the Hall for You?