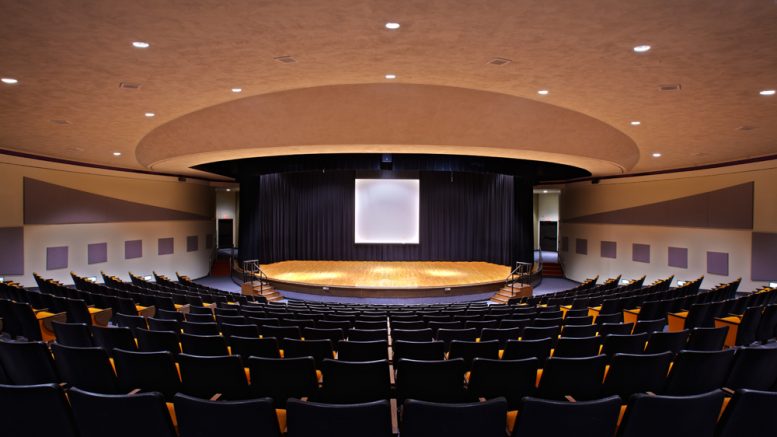 Students presented their speeches at the auditorium Tuesday night.

Last Tuesday, eleven sophomores presented their speeches during the first-ever finals round for the LEAD Lectures competition. Initiated as an experimental project by this year’s LEAD team, the competition aimed to provide sophomores the opportunity to develop leadership skills and apply knowledge to the creation of TED-Ed style speech. Competitors worked in pairs or groups of three, and one presenter for each team provided their perspective on a hot topic of interest to the sophomore class. If you missed out, here is a summary of the speeches below:

We are all powerful because we possess a pen. Poetry allows individuals to push forward activism and find solitude in times of tragedy. Wyatt introduced students to his favorite excerpts of poems and the role they played in his journey of reconciliation with the suicide of a close family member. Sometimes, we just need to stop and read.

The phrase “advancing the human condition” has been branded in the students’ mind as a wearisome, even comedic statement due to overuse from staff members and administration. Yet, have you ever stopped to think about how to apply IMSA’s mission statement in your daily life? Monika Narain explored the processes culminating to a Eureka Moment, a moment when the human brain connects previously learned information to arrive at a sudden realization or discovery. At IMSA, students singularly focus themselves in achieving outputs due to the high workload and pressure. Perhaps, taking a break is the most effective solution to unlocking creative thought.

A vast majority of IMSA students have ties to immigration from another country, but how do you fit into a culture you don’t know about? For Megan, her relatives thought it was more important to assimilate to America rather than hold onto their Polish culture, despite her curiosity into her heritage. After stumbling across a clue about her roots in Kraków, Poland, she discovered that she had ancestors who died in Auschwitz. She encouraged all students who associated themselves with another culture to preserve their identity, or the defining experiences of relatives may be forgotten in the passage of time.

Bridget initially felt afraid to express her conservative views to her fellow liberal-leaning students at IMSA students, though she ultimately did so students could surround themselves with differently-minded individuals to overcome groupthink. Through a personal and strongly spoken speech, she explained her motivations for becoming a conservative and addressed the dangers of the partisan lines influencing public opinion over controversial issues.

Though seen as a successful student by her teachers in a gifted education program, Shivani looks back at her middle-school career with disapproval. Her poor study habits and constant occupation with perfectionism reflected deeper problems about the American education system’s approach to gifted students. Giftedness, in her mind, has nothing to do with classroom work, as students who succeed on assignments may do nothing to challenge themselves and crumble at a single exposure to failure. The American education system should refocus on promoting a growth mindset, instead of rewarding those who adopt a fixed mindset towards personal growth.

Through a deeply personal and emotional speech, Sydney addressed the propagation of rape culture through the stages of physiological development. She detailed how attitudes towards gender roles shaped the formation of her identity through momentous life events, such as bullying, ostracism, and the death of a family member. These experiences eventually accumulated into a painful encounter with sexual assault in high school and compelled her to speak out against a society mired by misogyny.

School shootings have increased in the recent decade, but political leaders fail to follow promises with effective legislative change. Ella examined the catastrophe of the Stoneman Douglas High School shooting and the student-propelled movement that followed it. Leaders are not those who are in a high political situation, but rather those who step up to change a problem when nobody else would do it.

Some things are better at the bottom of the list. The United States ranks #2 in countries with the highest carbon dioxide emissions across the world, and some political leaders still deny the existence of climate change. Although these issues seem impossible to tackle at the individual scale, small, impactful tasks can save families thousands of dollars each year and dramatically reduce one’s environmental footprint. Recycle, turn off lights, and unplug unused appliances to get started.

At age 13, Nema was traded for 6 cows to become a bride of an older man. Upon realizing that her future would be doomed without her earning an education, she traveled to the parliament to appeal for a public education. Luckily, government officials were able to arrange her schooling, but most females in developing countries do not have the same opportunities. Low literacy rates, early marriage, and childbirth all contribute to the cycle of poverty among women. By opening the doors for education in developing countries, women may be in the next generation able to seek out better opportunities and alleviate the vicious cycle.

Schools stimulate only a fixed mindset by trapping students in repetitive cycles of workload. We assume that our intelligence and capacity for success is static. The only escape is by assuming a growth mindset, where we believe that our potential for improvement can always be developed.

Schools are failing America for the real world. Not only do they avoid teaching students critical life skills that allow them to thrive in a competitive environment, but schools also encourage social divisions within students. 50% of students will be bullied sometime in their academic career, and most experience the detrimental effects of cliques on their social life. The social atmosphere in school can only be solved through change on the individual scale.

The pair of Syndey Despe and Vivian Hedican ultimately took first place in the competition.  According to Ms. Andrea Stuiber, staff advisor for the LEAD program, the pair was “able to draw in the audience with their personal connection to the topic and with their style of presentation.” Sydney and Vivian will be receiving a catered party for their class, and the opportunity to submit a recording of their talk for an upcoming Ted-Ed conference in New York. The LEAD team was highly impressed by the results of the competition and will likely continue it for the next year of sophomores.