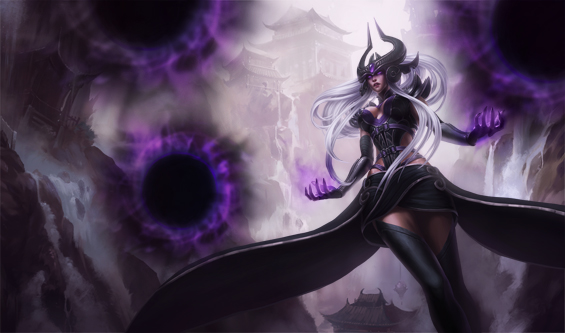 We League of Legends players appreciate and love Riot’s constant attentiveness to their game. The League of Legends gameplay goes through numerous updates and improvements every month. However, the most anticipated developments each month are the new champion releases. About once every two weeks, Riot releases a new champion. Despite their timeliness, I can only imagine that the creation of new characters remains no easy task. Each character must be drawn, colored, and given a name and skills. Most of all, all characters must be equally strong. Riot often bases their new champions off previously popular ones, but still always manage to change the similarities, making a new and unique experience for their players.
The newest character is Syndra the Dark Sovereign (below). Following are a list of Syndra’s spells:

Transcendent (Passive): Each of Syndra’s spells gain an added effect upon maximum rank.
Dark Sphere (Q): Syndra summons a dark sphere, which lasts for 6 seconds at a specified      location. The sphere deals magic damage and may be acted upon by Syndra’s other spells. (Transcendent Bonus: Deals 15% more magic damage against enemy champions)
Force of Will (W): Syndra grabs a dark sphere, enemy minion, or neutral monster, not including Dragon or Baron Nashor. The respective item may then be tossed to a location to deal magic damage and slow the target. (Transcendent Bonus: Increases the slow by 2 seconds)
Scatter the Weak (E): Syndra knocks back all enemies and dark spheres within a cone in front of her. The distance at which they are knocked back depends on how far away Syndra is from their location. Dark spheres knocked back stun any enemies within their path for 1.5 seconds. (Transcendent Bonus: Spell width increases by 50%)
Unleashed Power (R): Syndra utilizes the three dark spheres hovering around her. She summons the dark spheres and shoots all of them, including any additional ones she had already summoned, at an enemy champion. The spheres each deal magic damage to the target and last for 6 seconds after the spell has been cast.

Below is my personal commentary on Syndra’s spells and gameplay:

Transcendent: This ability is extremely similar to Rengar’s ferocity bonuses; however, Riot incorporated it into a passive ability rather than a substitute for mana. For a player, it is extremely important to effectively use these bonuses during gameplay, saving the passive ability for certain spells rather than exhausting it immediately.
Dark Sphere: Riot based this spell off of Zyra’s Deadly Bloom. The ability functions similarly, but the dark spheres last for a substantially shorter duration than Zyra’s buds. Due to their short longevity, players must strategically use the dark spheres in spell combos. I would recommend players who enjoy Zyra to attempt using Syndra because of this ability.
Force of Will: This ability reminds me of Orianna’s orb. Syndra can use this ability on champion summoned monsters, such as Annie’s Tibbers and Malzahar’s Voidlings. By using this ability on these minions, a player may rend the enemy’s minions ineffective, proving very efficient during team fights. In addition, when hit by the thrown item, enemies are slowed, making the spell extremely effective while chasing a champion.
Scatter the Weak: This spell is a completely new concept by Riot, and appears to have the possibly of becoming extremely successful. The ability functions as a skill shot when combined with dark sphere. However, since the move fires in a cone shape, the dark spheres will travel on an angular path rather than straight forward from Syndra. Players should experiment with this move first before perfecting it, learning the how the dark spheres travel when acted upon differently by Scatter the Week.
Unleashed Power: Like all other champion ultimate abilities, Syndra’s is completely unique and relevant to her background story and personality. Additionally, similar to all of her other abilities, players should use Unleashed Power as an introduction into a combo. Due to ability to summon three additional dark spheres, this spell gives a player multiple spheres to combo with for 6 seconds after using the ultimate. Most effective would be to follow Unleashed Power up with Scatter the Weak.

Be the first to comment on "Syndra the Dark Sovereign: A Review"