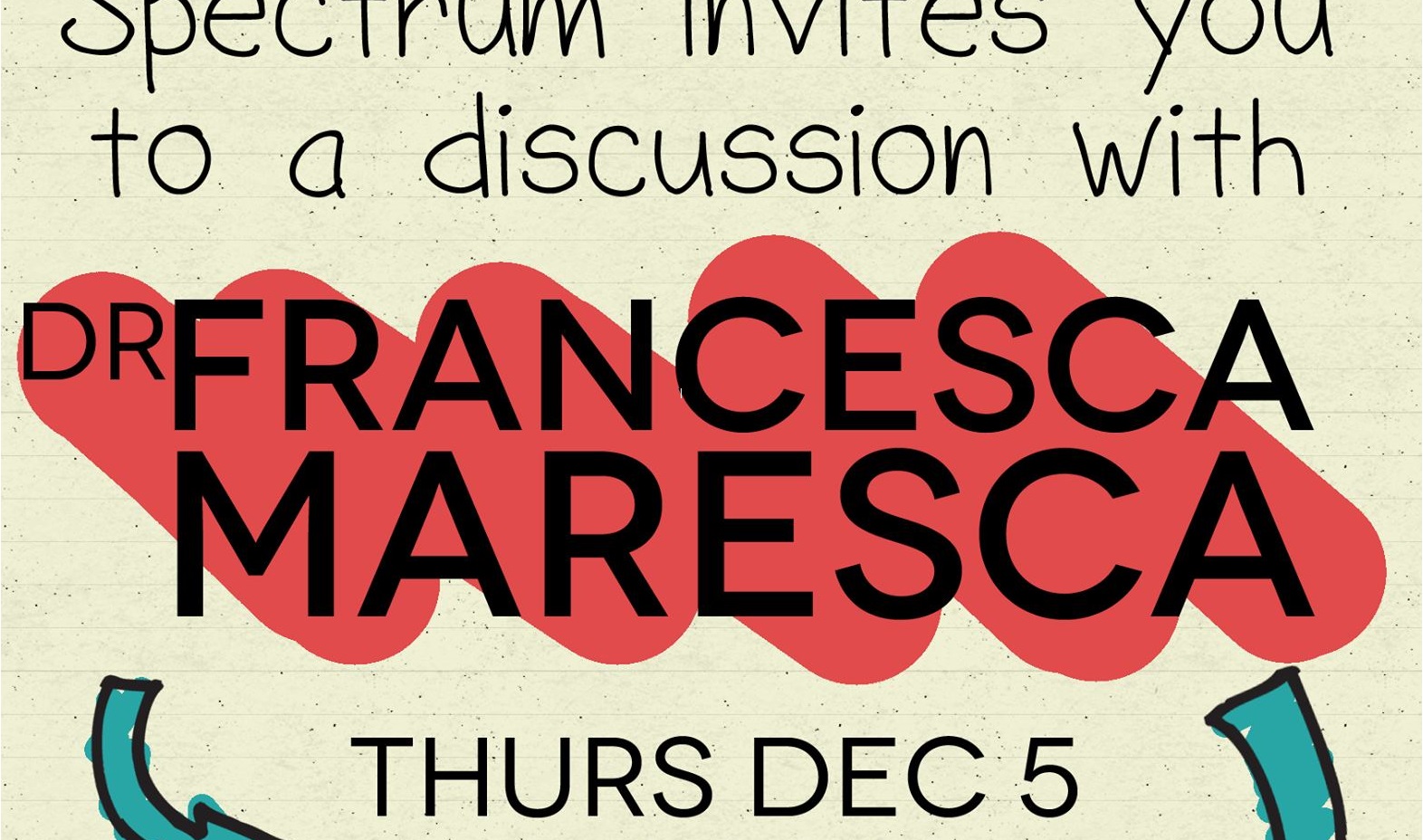 Dr. Francesca Maresca gets paid to talk about sex.

Or so she puts it. As Director of Health Outreach and Promotion at Rutger’s University, she oversees 40, 000 students and their sexual health. This Thursday, she flew in from New Jersey to talk to staff, but stayed after for a discussion hosted by Spectrum. Fun, bubbly, and charismatic, she regaled us with amusing anecdotes. Over  dinner with Spectrum’s board, she talked about everything from her little boy to New York bagels to racial diversity in schools, and brought the same spirit to the evening discussion. IMSA students Lauren Burke (’14), Maria Kuznetsov (’14), and Brittney Scott (’15) stand with Dr. Maresca who is the second from the right.

Her story of how she became a sexual health advocate stared when she was in high school. As she put it, “I knew one other gay person in my high school, and that was my girlfriend.” After attending Rutgers University, she noticed a flyer for student sex educators and signed on to become a peer sexual health advocate. Coming from a Catholic background, this was a whole new world to her, but she quickly discovered that she was, in fact, quite good at talking about sex. On a whim, she applied to a PhD program for human sexuality, got in, and then remained in academia. As director, she trains academic sexual advocates and engages in outreach – on top of that, she’s a certified HIV test counselor.

As part of student life, she often has to deal with making sure that students have access to mental health services and support systems, which can be challenging at the best of times. Students come in with family problems, addictions, and economic issues, and Francesca wants to make sure that these students have access to the help they need. Students, especially GSM students, often lead different lives on campus and at home, which can be exhausting. She makes sure that LGBTQ students on campus can openly talk to medical staff and that students of all types are supported by the university. One of the hardest things she’s done, she says, is telling someone that their HIV test came back positive.

Fortunately, over the twelve years she’s held her position, things have changed. Rutger’s student insurance planes cover hormone treatments for transgender individuals, students can minor in Critical Sexualities, and many student-run GSM organizations thrive on campus. Rutgers lays claim to the second-oldest gay-straight alliance in the country (second only to Princeton’s), as well as an OSTEM (Out in STEM) club. However, she was disappointed to note, IMSA lacks a sex education program. “I know you’re impulsive teenagers, and I want you to make the best decisions possible. But who’s talking to you about it?”

Francesca strongly believes in being happy and thriving not only in the classroom, but outside of it, too. Her advice to seniors, especially LGBTQ seniors? Feel comfortable and safe in your higher education, since you will be spending a large amount of time there. A school that is a stellar academically means nothing if you feel miserable due to the environment. Campus Pride compiles a list of the top 25 GSM (gender and sexuality minority)-friendly schools based on criteria like school policy, and Rutgers is on that list, she is proud to say.

When she was in high school, Francesca says, it would have been inconceivable to have a GSM club, to have a club where she could find people like herself. While she does wish there was a stronger wellness program in place, she reminds us to appreciate the importance of discussing GSM issues and finding community, especially in higher education.

Be the first to comment on "Dr. Francesca Maresca Visits IMSA"