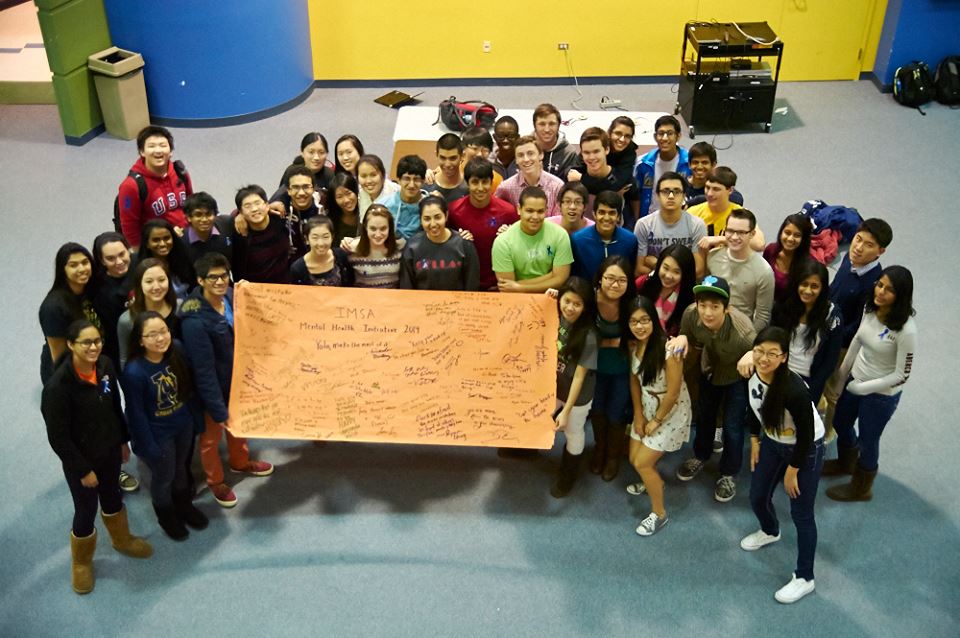 Mental Health Initiative (MHI) Week at IMSA is a week filled with de-stressing activities and events that raise awareness of mental illnesses. The first MHI Week was held in January 2014 and it was so well-liked that it was brought back as an annual event.

Jin Komerska, who is a member of StudCo and head of the MHI project, says, “At the beginning of the 2013-2014 school year, members of LEAD and Student Council began to notice an increasing prominence of mental health issues on campus. Members from both organizations came together to plan a week that would raise awareness and combat these issues. It is one of the first steps toward StudCo’s work with projects in the Student Health dimension.”

On Monday during midday, students gathered in the old cafe to write positive notes, which would later be hung around the main building.

On Tuesday, juniors Jessica Phung, Jyotsna Bitra, and Binita Gupta competed against Dr. Prince, Dr. Skinner, and Dr. Anjur in the midday event Clash of the Smart People. In Clash of the Smart People, the students and staff were quizzed on a variety of topics, including biology and math. The student team was chosen Monday night, when over 8 teams of 3 students competed in a tournament, testing their trivia knowledge. On Tuesday night, animal lovers rejoiced because cute, furry puppies were brought to campus and students could play with them!

MHI week programming continued later in the week with uplifting events such as ‘Thinking of You’s’ where students could send positive notes and candy to their friends, and ‘Brainpower: Turning Your Stress into Happiness’ where students learned about positive psychology. Overall, the week was truly a reminder to all students of the importance of de-stressing and positivity in such an academically rigorous environment. Huge applause to StudCo & LEAD for planning such an educational, enjoyable week.