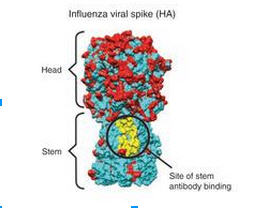 Many people are used to getting seasonal flu shots. The shots can contain several types of vaccines and are needed seasonally because each year, there are new strains of the flu that the previous year’s shots are not effective against. However, researchers have recently made a promising step towards having a universal flu vaccine, which could offer protection against all or most strains of influenza. This could mean that people only need to get immunized every five to ten years instead of every year.

For years, scientists have been working to develop a universal flu vaccine. Staff at the Vaccine Research Center (VRC) and the Laboratory of Infectious Diseases at the National Institute of Allergy and Infectious Diseases have made some progress. They took a different approach: instead of targeting the head of HA, they targeted the stem of HA. The stem is less likely to mutate so antibodies can stay effective longer and protect against future strains. The reason why the HA stem wasn’t a previous target of vaccines was because it was until recently unknown if the human immune system produced antibodies targeting the stem. Studies also found that the immune system doesn’t produce many of these antibodies. Researchers investigated this stem-targeting method with mice, immunizing them with a vaccine developed from the H1N1 virus that targeted the HA stem and then injecting them with a lethal dose of H5N1 influenza (a different strain). The mice were protected from the disease and this provided support that a vaccine that targets the HA stem can be effective against diverse types of influenza. Of course, after animal trials come human trials, which can take many years to finish and get approved by the government.

Targeting the HA stem looks to be a promising method for developing a universal flu vaccine but scientists are concerned that if this method is used, the viruses could start to change their HA stem structures more frequently, erasing the advantage this new type of vaccine has. The evolutionary arms race between viruses and hosts is ongoing, but now it seems humans could gain the upper hand in the near future.