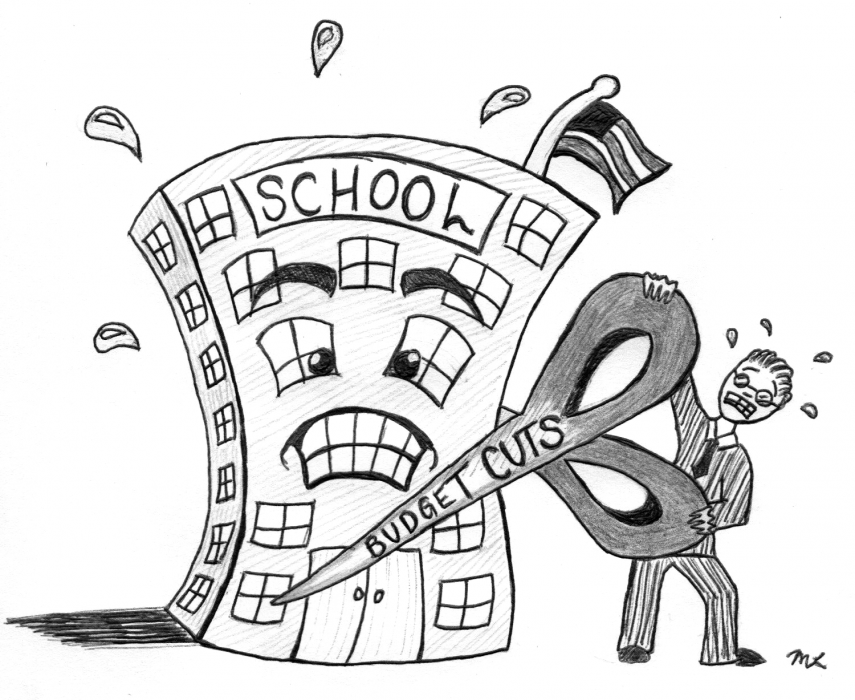 Governor Bruce Rauner has announced budget cuts in Illinois in education as well as the departments of public health, transportation, and veteran’s affairs, among others. This year and next, Illinois’ state institutions will be subject to a significant decrease in financial aid from the state government. But IMSA, arguably one of the most prestigious academies in the United States, comparable to similar institutions around the world, cannot possibly be victim to these cuts, right? Yet, the stark reality has arrived, and the budget cuts that have reached IMSA may be red flags for issues unaddressed both on campus and in the state.

On the IMSA campus, the repercussions of budget cuts were felt even before school began. Sophomores and juniors who eagerly made their course selections for the upcoming year months earlier, excited with the academy’s diversity of academic opportunity, were recently disappointed with a series of summer emails from administrators. The first such email was a death knell for many of the wellness courses offered by IMSA. Before, the academy boasted incredible, multifaceted class options like Lifeguarding, Net Games, Individualized Physical Fitness, and Dance. This summer, junior and senior students were informed that the only two classes available were Outdoor/Indoor games and Movement and Relaxation. Although these choices are wonderful wellness offerings, students still wondered what happened to the other nine options. What significance did their course selection months before even have?

The next email related to the many “changes” the next school year would hold. These changes included both a reduction in available courses and extra-curricular activities, and the news that some teachers would not be returning to teach. The email relating to Fine Arts is a prime example. Because the former Fine Arts teacher, Mr. Sewell, was retiring after years of teaching, the courses for this year have been curtailed because the new teacher(s) “may have different specialties and wish to teach a different selection of art classes than Mr. Sewell has.” Certainly, taken at face value, that statement could very well be true. But students wondered if the decrease in offerings could be attributed to the decrease in funding alongside the difficulty in finding a staff member as experienced and versatile as Mr. Sewell. Indeed there was also a decrease in the number of music and art courses. Beyond Fine Arts, teachers across numerous departments, including Wellness, Science, Mathematics, and History left IMSA. Now the student body and remaining staff members are left to mourn the loss of a powerful student-teacher rapport constructed over the time frame of the year before.

Students were also negatively impacted by the termination or relegation of some co-curricular activities (those which are directly funded and managed by the school as opposed to the school’s student council, which manages the clubs). Bowling and cheerleading have been completely eliminated although students can still compete in the IHSA. Bass fishing and Future Problem Solvers (FPS) have been downgraded from co-curriculars to clubs, meaning they no longer have a paid advisor and are completely student-run. Soccer’s junior varsity has been eliminated while softball, on probation, risks complete elimination because of “inadequate participation.” These consequences may be a result of the 7.9% cut, giving IMSA about $1.8 million less than it received last year. Proportionately and numerically, this amount is massive and has have formed IMSA leaders, including Dr. Bob Hernandez and Dr. José Torres, to make difficult decisions based on conferences with other schools, in-school activity involvement, and coaching remuneration. Indeed, schools all over Illinois are subject to similar reductions in money. Cheerleading, like softball, had only a small number of participants, which posed a difficulty in earning competitive invitations. However, unlike softball, cheerleading was not placed on probation, it was removed. Although they can still compete, what good is a team without an adult coach who brings the expertise, experience, and morale to the group? IMSA students continue to wonder why FPS has been demoted to a club after its extreme success and involvement last year. With nearly ten teams and forty members, as well as a state victory from an IMSA team last season which advanced to perform well in internationals, FPS has also lost its adult advisor and been demoted to club status.

These cuts raise some uncomfortable questions for IMSA. Is it merely coincidental that the major sports cut or put on probation (bowling, cheerleading, and softball) involved predominantly female participants? Furthermore, why were two emerging clubs which exhibited success in their previous seasons (bass fishing and FPS) consigned to an inferior level of institutional support? It may be true some of these clubs/activities were eliminated because of an absence of regular commitment. However, there were always some students who truly had a genuine zeal for these extra-curricular activities no matter how few in number they were. And if the activity they love is demoted or eliminated, it could leave the students – female students for that matter – disinclined to pursue their passions beyond school. Without a coach, competitive status, or organization, participation will decrease even more further.

These cuts are proving to be more than a thorn in the Illinois Math and Science Academy’s side. The representatives of Illinois are still debating IMSA’s budget, leaving the student body to wonder about the extent of and motivation behind changes in course options, teacher lay-offs, and co-curricular/club relegation. Fortunately for the sophomores, they will enter IMSA thinking just like football, cheerleading and bowling never existed. They will believe that the Fine Arts offerings were in the past just as they are now and that the upperclass Wellness courses have always been limited to two. They did not have to endure the pain of seeing some of their favorite teachers being laid off. They did not have to face the disappointment of their anticipated courses being extinguished in a few weeks after years of development and successful implementation. They will not come to IMSA this year uncertain of their school’s future both during their own tenure and years after. Perhaps this insecurity will impel the current IMSA student body to become proactive alumni. Whatever the future may hold, the academy will still strive to produce more Sam Yagans, Yu Pans, and B. Scott Gaudis, a home to today’s biggest innovators and leaders, just has it always has been.