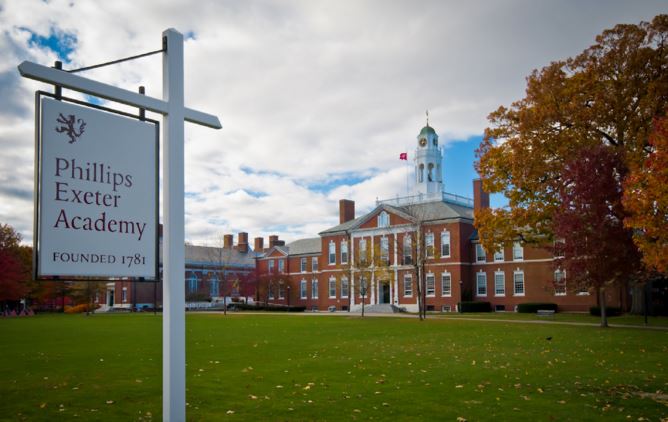 Known as one of the most selective and prestigious academies in America, this school has a long list of famed alumni, including Mark Zuckerberg, the renowned founder of Facebook. It is an elite boarding academy that challenges its students and is noted for its use of the Harkness table method, a teaching method in which classroom discussion is student-led at a round table. Unlike IMSA, however, the students at this academy typically get at least 8 hours of sleep every night, while still maintaining good grades and a healthy involvement in extracurricular activities and social events. Some of you may have heard of it… others may have not. This school is Phillips Exeter Academy- also known as PEA or Exeter to its students.

Unlike IMSA’s 7 dorms, Exeter has 29. However, with only 815 students, Exeter’s abundant resources enable it to give some students single rooms. Additionally, unlike IMSA, the dorms also have resident faculty members, who live on campus with their families in separate apartments. The faculty make sure that the students are receiving academic help whenever needed, and also know if anyone goes to bed too late or skips class. While it might be hard to imagine all of our IMSA teachers living with us, it is also important to consider the benefits of such an addition. Our teachers would be more sympathetic to our plights, and would also know us more personally, something that could affect their teaching methods in class. Knowing one’s students well would also provide insight as to when a student is not adjusting properly. With the right procedure, the teacher could resolve this problem either in or outside of class.

While IMSA students only have a full class schedule on 4 days of the week, Wednesdays are also spent working on homework or pursuing a guided investigation. Exeter, however, has a 5-day school week with activities, extracurriculars, and sports all scheduled into the student’s daily routine. School typically starts at 8am, but some students choose to attend fitness training or yoga sessions as early as 5:45am to stay healthy. The schools days tend to be long, but the students say that the classes are worth it. For instance, while some students end their school day at 5pm, others have scheduled classes or activities until 7 or 8pm.

Moreover, students at Exeter can only take up to 3 courses at any given time. Since each class meets for about 5 hours a week, only 15 hours are dedicated to classes offered by the academy. Students at PEA don’t receive more than an hour of homework for each meeting of a class, something that enables them to get quite a bit of sleep. What do they do during the rest of the long school day, though? This time is taken up by a wide variety of extracurricular activities, including electives, volunteering at Children’s centers, viewing gallery openings, and meditation, to name a few. Sports are also included in the school day, and Wednesday afternoons are chiefly devoted to athletic contests.

On the other hand, the application for Exeter is very similar to IMSA’s. Students have to submit English and math recommendations, along with full transcripts and essays. However, there is also an interview portion on the application, a feature that IMSA does not employ.

Unlike IMSA, Exeter serves all students from grades 9-12, and also enrolls new students in every grade. While the majority of its students live directly on campus, Exeter also has a percentage of day students, who generally spend from 8am until about 9 or 10pm on campus. Finally, Exeter does not restrict its application to in-state students. Instead, it welcomes “youth from every quarter,” taking students from five continents and every state.

Before a new student can become a fully-fledged “Exonian,” however, he or she must also learn to speak Exonia, a language that resembles the jargon that IMSA students use. Since Exeter was established in 1781, this language has been passed down for generations, and has subsequently evolved as well. First, Exeter has names for each of the grades. Prep represents 9th grade, lower represents 10th, upper represents 11th, and senior represents 12th. This is quite different from IMSA’s normal terminology for sophomores, juniors, and seniors, although IMSA does nickname younger students “schmens.” At IMSA, you might hear words like yare, hall, wing, mod, and inter visitations uttered in the hallways and dorms. At Exeter, however, you’d probably hear words like block, D.H., dickie, E.P., and V’s. Interestingly enough, IMSA’s inter-visitations are quite similar to Exeter’s V’s, except that students at Exeter can only visit each other’s room between 7 and 8pm.

Although Exeter may be a fantastic academy, it is also quite expensive, and highly competitive. The environment there mirrors IMSA’s in many ways, and there are definitely pros and cons to both. However, it is crucial that we IMSA students realize that IMSA can be just as beneficial to our education as Exeter might be to Exonians… that is, if we take the opportunities we are provided with, and make the most out of them in the short time that we’re here!

To learn more about Exeter, visit their website at: http://www.exeter.edu/

Be the first to comment on "All About Phillips Exeter Academy"