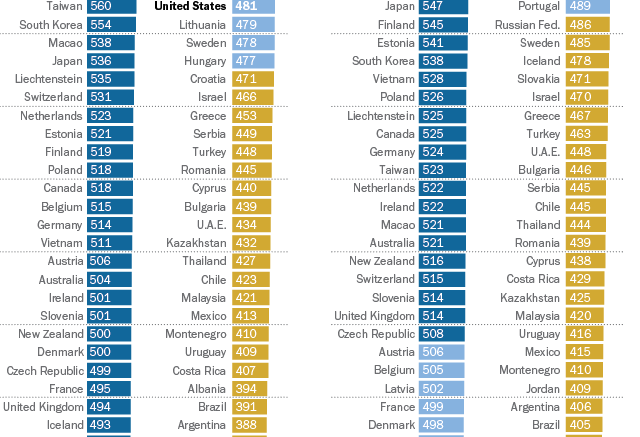 Every three years, 15 year olds from countries around the world take the Program for International Student Assessment (PISA) which tests reading ability, and math and science proficiency. This allows an international comparison of students in developed and developing countries. In 2013, the scores from the 2012 PISA were released and the United States settled around the middle of the countries tested, ranking 35th out of 64 countries in math and 27th in science. European countries generally had a higher score in math and science. For example, Finland had an average math score of 519 and a score of 545 in science while the United States’ scores were 481 and 497, respectively (scores shown in Figure 1 at the bottom of this article). This showed a drop from the previous PISA scores released in 2009; the US ranked 35th in math and 17th in science. How can these drops in scores be understood and reversed?

Many officials saying scores in math and science could be improved if the United States modeled its education system after European countries. In 2011, the National Center on Education and the Economy (NCEE), an organization that studies education systems around the world, released a report titled “Standing on the Shoulders of Giants: An American Agenda for Education Reform”. It studied the education systems of Canada, China, Finland, and Japan. NCEE believes the most effective way to bring the United States level with other countries in addition to modeling their education systems, is to improve upon them. A controversial suggestion recommended students must pass tests at certain grade levels before continuing their education. The tests would be high quality and standardized across the nation and the only way to succeed on them would be to actually master the material instead of just test preparation. NCEE also recommended redirecting more money towards paying for higher quality teachers instead of putting the majority of money towards high tech facilities, new textbooks, and administrators.

While NCEE pushes more towards standardized testing, Finland, which has been scoring highly on the PISA since 2000, pushes away from it. Finland promotes more critical thinking and collaborative learning compared to the United States’ test based learning. In addition, Finland considers a teacher’s profession similar to that of doctors and lawyers, requiring higher academic training than that of educators in the United States. For example, in Finland, 1 in 10 primary school applicants are accepted. In 2012, Pasi Sahlberg, a Finnish education expert and the director of the Center for International Mobility and Cooperation in Finland’s Ministry of Education and Culture, criticized the United States’ emphasis on standardized testing, saying it influenced how teachers taught too much. In 2016, the results from the 2015 PISA should be released and it can be seen if any implementations in the American education system have affected its ranking.