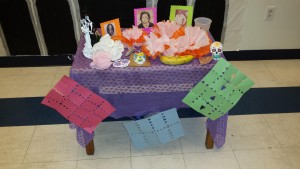 On the first and second of November, people in countries throughout the western world celebrated the Day of the Dead festival. In preparation for it, Spanish III students have been watching the movie, The Book of Life, to learn about the cultural background of the event. The movie describes the adventure of two boys and a girl growing up together and learning to celebrate and honor their families, rather than becoming slaves to their legacies. Previously, I was not knowledgeable about the event other than when my Spanish Teacher in 8th grade decided to bring us Day of the Dead bread made with a German recipe. So, it was quite enlightening to taste and learn about authentic Day of the Dead bread. My RC, Barbara Hernandez, offered a trip to the Day of the Dead festival in Aurora, and she mediated an activity in our wing.

In this activity, she made an altar dedicated to her ancestors, which has specific qualities. She put up pictures of her ancestors and adorned the altar with Mexican paper flowers, which she taught us how to make. On top of the altar were food offerings for those they were honoring. On November 1st, the souls of dead children come to visit their living families and enjoy ofrendas–offerings–such as candies and toys. Then, on November 2nd, the souls of adults and older people visit, and offerings such as alcohol and cigarettes are left for them. On both altars, there is fresh fruit, and pan de los muertos (day of the dead bread), which is decorated with bone shaped pieces of bread baked onto the top. Essentially, the ofrendas are things that the person would enjoy if they were still alive. Sugar skulls are also placed on the altar, as a symbol for death and the afterlife. The altar is arranged with care, in order to celebrate your ancestors’ voyages from the land of the remembered to Earth.

While Barbara was sharing memories of her mother teaching her how to make the altar, I could feel the impact of culture in her life. Although her family does not celebrate The Day of the Dead as religiously as they did in the past, she still feels obligation and love towards her ancestors. This is similar to my own Asian culture, in which I pray to my ancestors as well and leave open seats at dinner on special nights such as lunar new year. I realized that cultures have a lot of similarities. We all have something common within our diverse cultures, despite their differences.