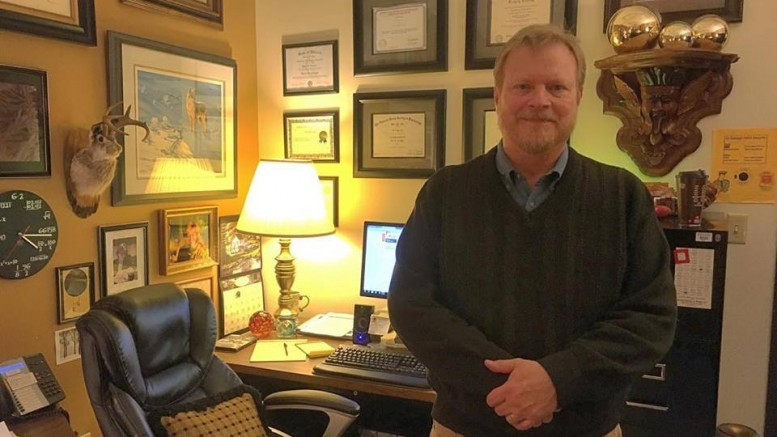 In honor of Mental Health Initiative week, the Acronym has interviewed one of IMSA’s school Counselors, Dr. David Evenson, or as he is more commonly known, Dr. Dave.

Why is mental health so important?

Obviously, mental health is important if you are a student, because you will be challenged emotionally as well as intellectually. So, if your mental health isn’t at least average or above, you’re going to struggle with things like depression and anxiety, and they’re going to get in the way of you studying and learning. That’s the obvious one. The other thing is- being a student, in and of itself, will create mental health issues. Because you’re challenged, asked to do things you’ve never done before.

How long have you been at IMSA?

Right? My son has graduated in that time.

Has dealing with IMSA students specifically taught you anything? How have you changed since your first year here?

I would say, obviously, yea, it’s taught me a tremendous amount. And the one thing would be with misdiagnosis. Because a lot of kids are not clinically depressed, they don’t necessarily have ADD, but they have symptoms and characteristics. It turns out, talented and gifted kids have that anyway. Because they tend to think more, they are more in touch with the more emotional side of things, more sensitive to the environment. They think a lot about existential issues, you know- the meaning behind things. Which, in it of itself, can generate feelings of sadness or anxiousness or trying to think of what their purpose is in life. So it’s helpful to not label them with a diagnosis. It’s better to try to listen to them and try to focus on what the actual issue is.

What are some characteristics that people suffering from mental illnesses have and may not be aware of?

Well, I would have to say,there are definite signs from people who have anxiety or depression. Most kids, they feel like it goes on for a very long time and that it is normal. So, like, some kids would come to IMSA having felt this way for a long time. And to feel like oh, yes, this is depression, but not really.  It turns out that yea, it really is, you’ve just gotten used to it. Over time, you don’t do anything about it because you thought it was normal for you as a person. That’s one of the things I see. In terms of characteristics, I think students start to feel down on themselves, expect more than they can really give. They doubt their own abilities, and they have problems like managing a whole lot of different things at one time, you know, juggling a lot of stuff that you have to do. Along with that, they decrease in energy, loss of sleep, which is one of the bigger ones that can contribute to mental health issues. And plus, you know, the diet. You change your diet from when you were at home , and you eat stuff that isn’t necessarily nutritious.

What can you do if you feel like you have depression or any other mental illness? At IMSA, or in general?

In general, there is so much self help stuff out there now- that’s a great place to start. There’s a lot of stupid online tests, but places like the Mayo clinic and the CDC have really good question and answer things about what is depression, what it’s like. Most hospitals even have programs online then. I would start there, perusing it, saying where do I identify? What makes sense to me? And when you feel like, wow, I might be depressed, then the next step would be get an evaluation for it. Or maybe the next step is to talk to a friend and to say, here’s what I think is going on with me.  And the next step after that may be to talk to a parent, or to see the counselor at school, get a couple different opinions, and then maybe to finally see a doctor and let them know. But the usual first step is to talk to someone else about it once you think there is something going on. And for most kids here, it’s their friends.

What is your favorite or most interesting story at IMSA?

My favorite or most interesting story? Oh my goodness. In any category?

Yea, anything at all.

Well, there’s a girl- she was a junior. And she came in with symptoms of depression, some anxiety, not sleeping, not eating. We worked together for about 6 months, and she got a consult with her doctor, she ended up taking some antidepressants, and nothing seemed to help. It was actually over break that a family member diagnosed her with hodgkin’s lymphoma. It’s a life threatening cancer, obviously. And she got into treatment- and it’s a very nasty treatment. I mean, it destroys you. You lose your hair, you lose everything. But she kept up, believe it or not, with her studies, at home. And still ended up graduating on time. I have to say, that’s like the most amazing story- I watched what she went through, it was pretty heroic. I don’t know if many people could have done what she did. And she blogged about it! She had her own blog to document her journey.

So do you think writing, blogging, helps with coping with these diseases?

Yes, I do. As long as you stay away from just dumping bad news out there. If you’re able to talk about ‘this is what I’m feeling, has anyone felt this, give me some advice, this is what I’ve tried’- sometimes just telling your story will help: that somebody else is going to read it, and connect with it. You just got to be careful who you talk to.

How has this job developed you personally?

Oh, man. It’s really opened my eyes to what talented and gifted kids go through, what they miss out on in their home schools, the camaraderie they find here with each other. And just the fun of getting to know kids in the nontraditional school setting. You know- I can take kids out for coffee, take them to a movie,  we can go to Oberweis, I can go to karate club with them, do stuff on intersession. It’s a much more community oriented environment. Where you can actually make friends with a student. And when they graduate, bang- they’re your Facebook friend, and you can follow their life and  watch them grow up and get married and all that fun stuff. So, I think that’s the most important things for me. And I think it’s helped me grow in terms of patience and compassion.

What is your advice to students in general?

In general? Try not to handle things alone. Most IMSA kids are fiercely independent. So my thought is, if you can reach out to just one other person, and let them know where you’re at when you’re struggling, that builds character for life. It’s a great coping skill to be able to reach out, to not be alone with stuff. It’s probably my biggest piece of advice.

When you were a student, what’s one thing you couldn’t see that you can see now? As a professional, a teacher, who deals with students from an outside perspective?

I guess the angst that adolescents go through. I’m constantly reminded of that. When I was a kid, we would write morbid poetry and sit around talking about how lousy our parents were. It’s kind of like, wow, they’re still doing that. It’s like a teenage thing that we go through- though not everyone does. But there is a sort of mood disorder thing as you are growing up. With the hormones are going, the brain developing- it shocks me that I went through the exact same thing in high school, and so did most of my friends. In some ways it’s nice to know it’s normal.

You can visit Dr. Dave’s office in Student Life or email him at drdave@imsa.edu. Some resources that he mentioned are www.mayoclinic.org and www.cdc.gov.

Be the first to comment on "Humans of IMSA: A Chat with Dr. Dave"