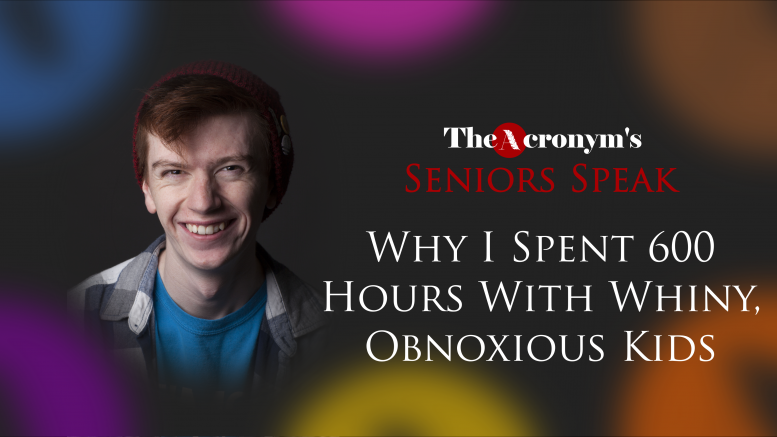 Andrew Adams (‘16) submitted this article as part of our annual Seniors Speak series. This series is designed to give seniors who are leaving a final opportunity to share their voice and preserve the traditions and experience of IMSA’s seniors alive long after they’ve graduated. Andrew lived in 1507, but he never forgot his sophomore year in 1501. He spent his senior year pouring too much time into being Co-Coordinator of the Leadership Education and Development Program and into being Acronym’s Editor-in-Chief.

Over my summers at IMSA, I’ve spent approximately 300 hours in classes with kids and another 300 hanging out with them, preparing lessons, and revising curriculum. Numbers might sound harsh or impersonal, but for me looking at those numbers reminds me of the 600 stories I’ve collected during those summers. I wiped away tears from a little boy who didn’t understand vacuum pressure. I stayed up late, furiously Google-ing and scribbling on scraps of paper little facts I could tell kids the next day. I cautiously and clumsily explained why I was excited on the day the Supreme Court told me that I could get married. Then I cried when a little girl looked at me and asked why the government didn’t make that decision years ago. Most importantly for me, the people I respect most in the world – Julie, Hannah, Katrina, Josh, Collette, Ryan ,dozens of other friends, and hundreds of little kids – started to teach me how to teach others. They gave me a primer course in the craft of teaching, the art of explanation. They gave me tools, tricks, and techniques that I have used daily since I learned them.

In its most basic sense, teaching is getting someone else to have the same idea in their head as you have in yours. Imagine explaining the equation Y = 3X + 6 to a 5th grader. Fo IMSA students, this is a trivial equation, easily manipulated and understood without so much as a piece of scratch paper. Most of us could solve it, draw it, analyze it, differentiate, or even integrate it mentally. But if you’ve never used letters in math class before, it’s a really confusing concept. This was a challenge I faced in my first ever lesson, sometime near the end of my sophomore year. The lesson was aimed at teaching kids how to use tables in a scientific experiment. We had constructed tables and were analyzing results. The discussion went something like this:

“A variable?! What does that word even mean?” (Side note: this girl came to summer camps the next summer and never let me live this down conversation.)

“A variable is just a symbol that could be any real number!”

“I just mean it could be anything.”

“That’s what our experiment found.”

“Then why are you telling us X could be anything! It’s 9!”

At this point, my illustrious co-teacher, Ryan Yang saved me from myself.

Unsurprisingly, the class knew what a box was.

“Wait, Ryan! Does this mean we could use a table like earlier?” (This was the same girl who wouldn’t ever let me forget not knowing how to explain a variable. I may have let her get away with teasing me because she was a genius.)

To me, it’s obvious in reflection what I did wrong, but at the time I thought my explanation of what X was would have worked. I had an understanding of what the variable X was, after all, and I broke that down to a simpler explanation: a symbol to represent any real number. What Ryan did differently was he didn’t start from his own conceptualization of X. He started with what the kids knew: they know what boxes are. By starting where our students were and pushing them along the path, he found much better results than just by stating what he knew.

This process of starting where your audience is is a technique used by teachers throughout the campus and the world. Some would argue that that is the fundamental action of teaching.

You might ask yourself – justifiably – why I’ve spent this long telling a story about my own embarrassment – or even why it matters that I learned how to teach. The answer is clear to me. To explain it, I’ll describe another experience of mine: my scholarship interview with Dr. Benjamin Stark from the Illinois Institute of Technology. Because he made the horrendous mistake of asking me what I did for fun, 45 minutes my hour long interview were dedicated to discussing how to teach and how to lead. We discussed at length constructionist models of teaching, the differences between facilitating a group’s work and teaching them how to do something, and the similarities between lecturing hungover sophomores and 3rd graders.

I will never forget what Dr. Stark said to describe it all: “Teaching is not a clean function. It’s piecewise, a bit like an Euler approximation. Start where your students are, move a little bit forward, reassess, and then move a little bit forward again.” These words have rattled around in my head since that interview months ago. I started approaching everything with that mindset: class presentations, facilitating meetings, and even being a student. How could I learn if I didn’t consciously think about what I understood and how what my teachers are saying will change that?

Teaching and learning is all well and good – most of us will be students for years, after all. However, we will all eventually graduate. We will no longer have defined roles like student, teacher, and professor. The very successful among us, though, will never give up a particular role: educator. The very successful among us will never stop trying their hardest to explain new things to their colleagues. It doesn’t matter if you’re speaking to a bright-eyed 11 year old, a bored sophomore, a class of other students, a colleague at your work, or a professor who is three times your senior. The most successful people on Earth never stop assessing what the person they are speaking to already knows and trying to build from that. If you can teach the people around you something new, then you can participate in great world change.

In nuce, – that’s Latin for tl;dr – IMSA has prepared me to tackle the world’s greatest challenges in a particular way: unending education. The pedagogy of sympathetic explanation is applicable to all factors of life, all industries, all times. I urge you to adopt a similar mindset of teaching what you know and learning all you can. Maybe if we all teach a little bit more, we can advance the human condition.

Seniors Speak: A B Student’s Guide to IMSA

Seniors Speak: The Beauty of the Human Being

Be the first to comment on "Seniors Speak: Why I Spent 600 Hours with Whiny, Obnoxious Kids"