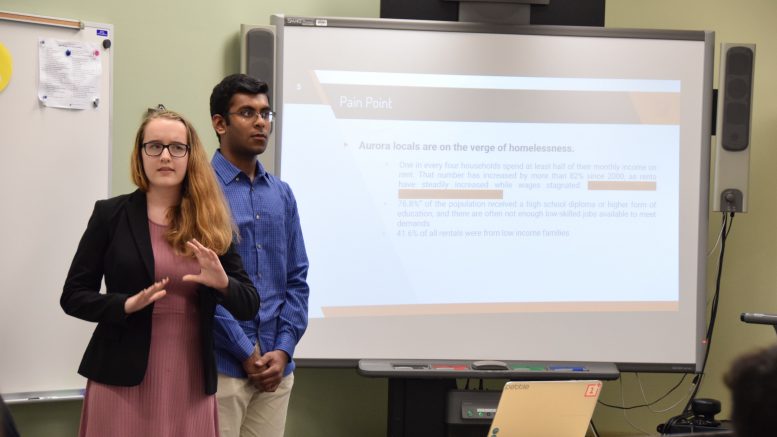 On Wednesday, November 3rd from 4-6 p.m., LEAD had their 2nd annual mid-year event for students in the social entrepreneurship elective (SocEnt).  At this event, twenty-seven groups of sophomores presented their background research on a social issue and their preliminary plans to address it.

In one session, Sruti Mohan (’17), a SocEnt LEAD facilitator, sat next to Roger Breisch and Jacque Hebein, both educators who took time out of their day to critique the groups’ works. After introductions, Sruti let the students present and discuss future work with evaluators.

One Social Entrepreneurship Venture (SEV), “Abandoned Homes in Aurora, IL” by Sol Hwangbo, Kristin Wolford, and Nolan Burke, emphasized how abandoned buildings could be converted into community centers. They discussed how the number of abandoned buildings rose in Aurora following World War II. They tended to attract crime and inflate the value of surrounding land in the past decade.

They cited the works of other SEVs such as “The Garage” and “Rebuild” which targeted similar issues. The students were well-informed and had even contacted the Aurora City Council for additional information. They conversed, presented, and conducted themselves like entrepreneurs and explicitly stated their “pain points, goals, target audience, macrotopic, and microtopic”.

In his comments, Professor Breisch mentioned that the students took a leap from identifying their issue to proposing a solution, and it was evident that their solution was a bit idealistic and not specific enough in terms of costs.

SocEnt coordinators, Grace Park (’17) and Srivarun Tummarakota (’17), explained that while “Mid” is conducted similarly to the annual Social Leadership Exchange (SLX), the expectations are different. Srivarun said, “It’s like a checkpoint for students because we wanted to focus on research this first semester and them really understanding the root of their problem. This was a way they could present all of the research they have so far, and come up with the problem they’re picking, how should they approach it, and a lot of students got  the stuff they wouldn’t have if they [otherwise went] without anything.”

All the groups were formed around a month ago. Grace explains, “[Mid] is more of a transitional event…second semester is more of the implementation and doing or creating the actual SEV.” Daisy Bugarin (’17), a current IMPACT facilitator, adds that after Mid, students might change their focus, get new ideas, and/or truly understand their social issue and its impact.

Another SEV, “Underprivileged Girls in Technology and Engineering” by Madi Mazzorana, Emily Sallenback, Derek Ronske, and Mary Ashley Tendor focused on the absence of girls in STEM activities and classes in East Aurora. They mentioned that the number of females in the Wizards (Robotics) club of East Aurora dropped from having 2% more females than males to 84% less females than males between 3rd to 8th grades.

One of the evaluators shared, “I have a 3 year old daughter and I want her options to be viable thoughts”, supporting the validity of the project. The SEV was advised to look more at the causation of this STEM gap, which would probably change their current solution.

This year, Mark Liu – a Social Entrepreneur based in Kenya – ended the event discussing his current work and opportunities for SocEnt students and other IMSA students. Daisy says Mid not only improves students’ presentation skills and current ideas, but also allows them to put things into perspective: “…we’re all dressed up, we’re in IN2, and we’re actually talking to real educators and activists. This is a representation of how it works outside of IMSA.”

Be the first to comment on "LEAD SocEnt Mid-Year: An Event for Student Growth"