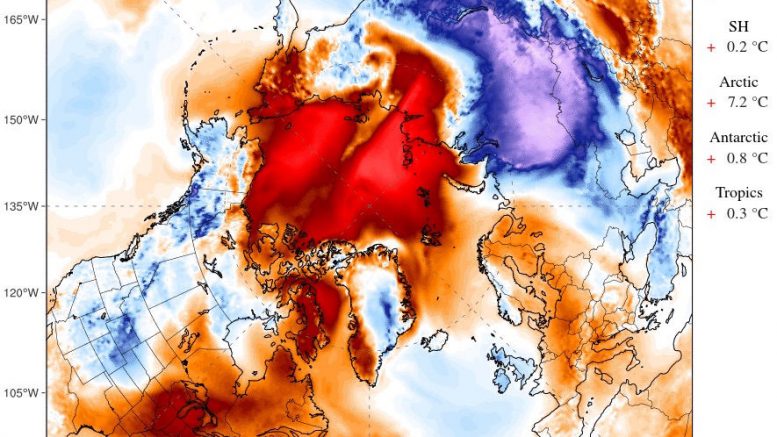 With 2016 on track to becoming the warmest year on record, the North Pole is currently experiencing a spike in record temperatures.

This change in the weather comes during an unusual time of the year, when the Arctic is supposed to be in a phase of freezing throughout fall and winter, with temperatures in the region dropping for polar night.

However, this hasn’t been the case, as researchers have reported that the temperature in the Arctic is presently an astounding 36 °F warmer than normal.  Meteorologist Richard James, the author of an Alaskan weather blog, notes “So far the lowest daily high temperature this season is 22°F [–5.6°C], which shows a remarkable absence of cold… The most similar year in the past was 1998, when the coldest day through mid-November had a high temperature of 15°F [–9.5°C].” 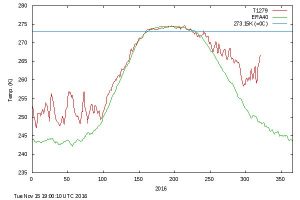 This figure, from atmospheric scientist Zack Labe, shows the mean temperature for the Arctic area above the 80th north parallel.

Jennifer Francis, an Arctic specialist, explains the North Pole’s higher temperature as a result of many related factors.

“The Arctic warmth is the result of a combination of record-low sea-ice extend for this time of year, probably very thin ice, and plenty of warm/moist air from lower latitudes being driven northward by a very wavy jet stream,” she tells The Washington Post. 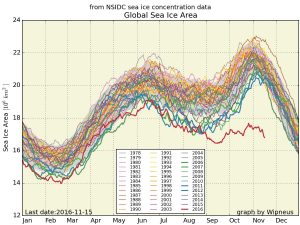 The figure by meteorologist Eric Holthaus measures the global sea ice area, with this year’s levels in stark contrast to the previous trends.

Climatologists have also indicated that the record temperatures are increasing the rate at which the Arctic’s ice caps are melting. “Despite onset of #PolarNight, temperatures near #NorthPole increasing,” tweeted Daniel Swain, a climate scientist at UCLA. “Extraordinary situation right now in #Arctic, w/record low #seaice.”

“There are some areas in the Arctic Ocean that are as much as 25 degrees Fahrenheit above average now,” says Mark Serreze of the National Snow and Ice Data Center. “It’s pretty crazy.”

Serreze believes that there are two reasons for the increase in water temperature. One, he explains, is due to the “very warm underlying ocean” as a result of the absence of sea ice above the surface of the water. Serreze also notes some problems with the jet stream, which allows the warmer air to flow toward the North Pole.

“The sea ice is at a record low right now, for this time of year, that’s one thing,” Serreze states. “And why it’s so low — again, there’s so much heat in the upper ocean in these ice-free areas, the ice just can’t form right now. The ocean’s just got to get rid of this heat somehow, and it’s having a hard time doing so.”

The changing climate isn’t just restricted to the North Pole, either; the Arctic’s weather impacts the rest of the world as well, specifically North America, Asia, and Europe. During the winter in the Northern Hemisphere, arctic cold continually spills out into the continents within the polar vortex, an area of low pressure and cold air near the North Pole, and any change in the polar vortex would mean a change in the prevalence of winter storms during the season.

With the record-breaking sea ice levels and temperature, it is not yet certain if the recent weather trends will continue in the Arctic. Nevertheless, researchers will be keeping a close eye on this situation in the region.

Be the first to comment on "Record Temperatures in North Pole"