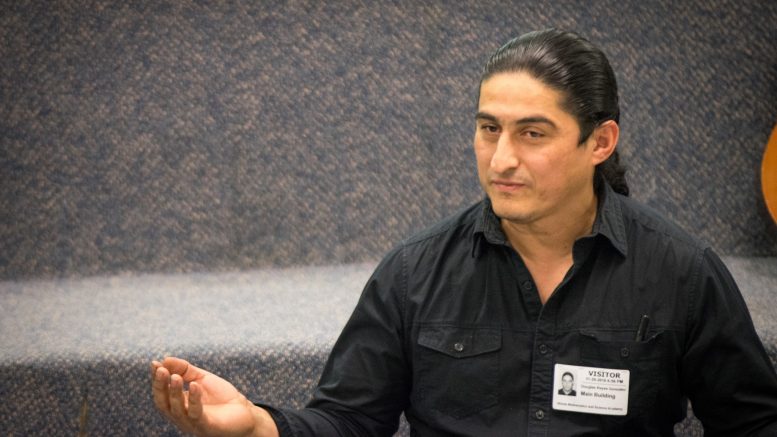 On Tuesday, November 29, Spanish IV students had the opportunity to hear firsthand from two survivors of the Salvadoran Civil War about their experiences, after studying this conflict and its social impact in depth through artwork, documentaries, and censored songs from the time period. In this Q & A session conducted completely in Spanish, students (and other members of the IMSA community, such as Dr. Torres) asked guest speakers Señor José Alvarenga and Señor Douglas Reyes questions about their childhood, the living conditions, the social impact of civil war, child soldiers, the terror inflicted by the army and government, and the loss of innocence and a normal life.

Spanish IV teacher Señora Lily Barcelona explained the intent of this event: “When studying civil wars, we have a tendency to categorize between two groups. Part of the purpose of this unit is to push students to contemplate what happens to those who are caught in the middle and the consequences of war for families and children.”

This was echoed in the words of other students, who strongly felt the impact of this event. Sandra Dragan (‘18), a Spanish IV student, said, “I don’t think I truly comprehended the degree to which [the people of El Salvador] suffered. After last night, however, talking in person to two people who survived the war made it all much more real to me.”

Señor Reyes’ illustration of how life truly was during this time period painted the reality of a war-stricken country and the children caught in between: “When I was 8 years old, I would be too scared to step in the streets for a fear of bombs from helicopters, army soldiers, ambulance sounds, and the bodies…It was a time period where innocents were massacred, when voices were oppressed or shot down with bullets, and basic human rights were violated, a time when I was just a kid.”

Years have passed and the government has changed, but the country is still at war with innocent people suffering to this day. As Señor Alvarenga said, “The government passes, but the hunger stays.” (Original quote: “El gobierno pasa, el hambre queda.”) When asked about what we as students, we as a nation, can do to help the situation in El Salvador, both speakers asked us to spread our knowledge (nuestra consciencia).

At the end, Señor Alvarenga explained his vision of a harmonious society, brought together with knowledge and respect for each other: “It’s the only way to prevent something like the war from happening again. I’m amazed by the diversity of students here, people with origins from India to Russia, learning about la guerra civil salvadoreña. This is what gives me hope for a future―esperanza para el futuro.”

How to IMSA, IMSA, Lifestyle