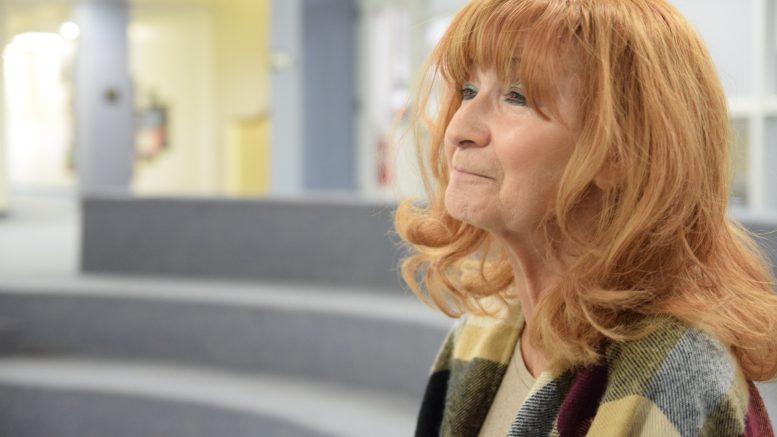 “She always is looking out for the students. Her positivity is a force against the overwhelming workload and expectations on staff and students.

“Rose’s friendliness and breathtaking enthusiasm are legendary and reflect her dedication to our school and its people.

Rose takes a personal interest in students and faculty here that isn’t covered in her job description. During my senior year at IMSA, Rose complimented me on one of my art class drawings that was hanging in the front of the building. That meant a great deal to me as a teenager. Now, we talk about poetry, one of Rose’s many interests. Rose makes IMSA a better place to work by connecting with others through shared passions.” ~Dr. Hancock, Class of 1989 & current English faculty.

“I grew up in Geneva and Batavia, kind of between the two. It was like a lower middle-class family, but our parents really loved us. It was difficult money-wise and I had a handicapped sister who had a brain tumor, and she eventually died. It was hard. They always took care of her at home when it got bad at the end. Way before there was anything like home care. They didn’t even have support groups or things for when your child had died. But we always had storybook Christmases and Thanksgivings, like ones you read about. Even though they didn’t have a lot of money, it was always like that for us. I always felt very loved. Our parents weren’t the type to say ‘You can’t do this. You can’t do that.’ We didn’t have a lot of opportunities financially, but it was still good. I’m the oldest of six kids, and I’m probably the only one of them that didn’t have college education.

But I’ve been through some amazing things.

In the 70’s, I was very much into hospice. A nurse in Batavia put a little ad in the Aurora Beacon, and she said ‘Anyone interested in forming a hospice in the Fox Valley area, call me.’ She only had maybe 3 people answer it. It was more like the Living Well in Geneva. It was the first hospice in the Fox Valley area. We did it all in my house. All at my kitchen table. The whole logo they had up until a couple years ago was written up at my kitchen table. We didn’t have money. Once other doctor’s wives got involved, it really got going. We touched so many lives with that. After things started going well, we pulled away and let others take it from there. I met wonderful people through that work.

My resume is all over the place. I’ve worked at an insurance company. My favorite was when I worked in the medical and dental field. I was an operating room technician many years ago, and they call it something different now, but you would hand instruments to the surgeons. I loved it. I’ve worked for doctors who let you learn medical. Back then you could get grandfathered into a lot of things. One of the dentists I worked for, it was in the local area of Batavia; if there were car accidents, we would go to Delnor Hospital and work on the victims for the dental part. You can’t do things like that now, but we used to. I absorbed everything and he would give me medical books, then he would test me. I loved it so much.”

“What are your goals for the future?”

“I think it’d be fun to get back into some kind of medical thing when I retire. I’d also like to have enough money to visit where it’s warm. Somewhere pretty. I really want to see Florida before I die. And people that have been there say, ‘Oh, you won’t like it, it’s really not all that.’ But anytime I see a picture of it, my heart jumps. They don’t realize how lucky they are. I’m someone who loves 90 in the shade and humidity. I appreciate the beauty of the sunsets and the sunrises, the beauty of the sand and just seeing that. I’ve always been in the Midwest, and we never got to go on vacations because my sister was ill. Most of the screensavers on my computer are of Florida, even in winter.”

“What brought you to IMSA?”

“I was at my previous job, and I was bored with it. They were giving me other projects to do and I was still bored. So I applied to about four places that day, and when I came to IMSA I thought it would be fascinating to work there. The first person I interviewed with was Dr. [Stephanie Pace] Marshall herself, in her office. We clicked on everything right away. And their ad in the newspaper said they were looking for receptionists ‘with an executive flair.’ Back then, at the bank, one of the girl’s daughters worked at the Board of Trade, so she had gorgeous outfits. She gave me the ones she didn’t want anymore, so I used to dress to the nines here. I was so gorgeous. It’s something about this job that brought out a different part of me that I never got to have before. I instantly bonded with the students.

I’ve got to say the students and parents are the lifeblood of what I do. It was then, it still is. It really is. If they had me in a back office away from the traffic and people, I probably wouldn’t have stayed all of the years I stayed.”

“What are some struggles you’ve faced while at IMSA?”

“For a lot of years when I worked here, I never used my sick days. And then a bunch of things in a row happen. In 1999, I had all kinds of back, shoulder, and stomach pain. So, I went and had some test. What they found was three large liver tumors that were causing my liver to stop working and it wouldn’t even filter. I have never found another person in the United States, in the world, that survived the kind I had. I had an eighth of a liver left. And most anyone that I’ve met, even in other states, died. You have massive bleeding and a lot of trouble. My liver surgeons were brilliant, wonderful people. Usually on the anniversary of it, I take off work to go hug them and I thank them for my life. They were very brave, and I even thank the anesthesiologist. He cries, because no one usually does that.

But there’s just no rhyme or reason why I lived. When we have the blood drives here, it touches my heart so much. I wouldn’t have lived if it wasn’t for Heartland blood transfusions and platelets. I had so many of them. It was that that saved my life. I really take it to heart when we have our blood drives. I’ve taken days off, gone into the Heartland and thanked the people. I stay there all day and thank them. I think it’s powerful when you see someone who’s made it through all of that.”

“What are some of your best memories at IMSA?”

“I’ve got a great story. Dr. Marshall wore full-length fur coats, and she had maybe 4 or 5 of them. She wore it one day and it was upstairs. I was really good friends with her secretary back then. On my breaks I’d go up there and we were sitting around just talking and I said ‘God, her coat’s so pretty.’ Her secretary said, ‘It looks about your size, Rosemary, why don’t you put it on?’ I said, ‘No!’ And she goes, ‘Yeah!’ Dr. Marshall is off at a meeting, so I put it on and I’m dancing around. We’re laughing and having a great time! All of a sudden it gets quiet, and I turn around and there’s Dr. Marshall. Her secretary says, ‘Look, it fits Rosemary perfectly!’ Amused, Dr. Marshall responds, ‘I see that, take it off.’ She remembers that to this day. We always had so much fun. And one year, Dr. Marshall did give me a winter coat, when she was tired of it.

One time one of our social workers walked into IMSA’s front doors and he exclaimed, ‘The rainbow lady!’ Because I was so upbeat all of the time. Sometimes people look at us by our titles here, and think there’s nothing to you. They don’t understand the things you’ve done. I choreographed for figure skaters. I’ve done really neat things. But people look at you as if you’re pigeonholed to what you do now. Students have so many beautiful qualities and talents people don’t see either. We need to treat each other better. I tell Dr. Marshall every time what a privilege she gave me to be here with these students. As I pass through the years, there are the likes of them we never see again. It’s more than a job. It’s not just a paycheck. I want to make things better.”

Aurora Harkleroad lives in 1501 and hails from Rockford. She is the Director of Humans of IMSA on the Acronym and writes comics in her free time.

4 Comments on "The Rose of IMSA"