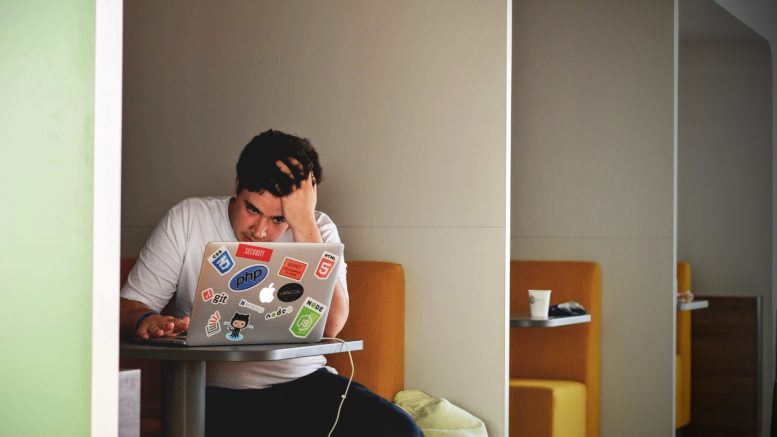 How much stress can we take before we break? (Source: Unsplash)

When Amulya Jasti first received the call that she had gotten off IMSA’s waitlist, she was ecstatic. “My parents withdrew me from Neuqua immediately,” she says. “I was set on going.” In her eyes, attending IMSA was a unique opportunity to live in a residential environment and engage in challenging curriculum for several years. Yet, after experiencing reality as a student, her perspective on the institution shifted drastically. She decided to drop out before two weeks of classes were complete. 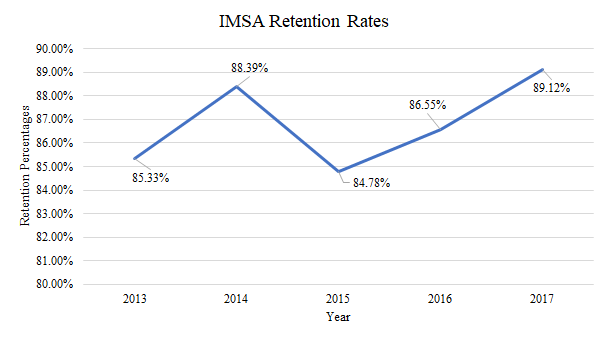 Comparison of dropout rates from the graduating classes of 2013 to 2017. Data obtained from Katie Berger and Reuel Abraham. Created by Grace Yue.

Amulya’s decision reflects that of some other students, whose struggles at IMSA have diminished their pre-sophomore year enthusiasm to the point where it’s unbearable to stay. IMSA’s Class of 2018 currently has an 84.95% retention rate, with a total of 226 students on the first day of classes and 192 students as of February 26, 2018. This number is only slightly lower than the average from the past five years, but compared to other high schools and colleges across the nation, IMSA’s retention rate is frighteningly low.

The golden question is: why? Amulya primarily attributes her decision to lack of privacy in a residential school: “There was no place to be alone. Your roommate could invite anyone in, and the wing & hall commons always had people. So, I ended up having to freeze to death outside just to talk to my parents on the phone without anyone listening.” Additionally, she found that her attachment to her family prevented her from enjoying her experience to the fullest. “If I went to IMSA, there would be no one to guide my sister as she grew up,” she says. Her lack of free time, the institution’s academic rigor, and her constant feeling of being patronized by her peers only worsened her situation.

Another IMSA dropout, who prefers to remain anonymous, agrees that academic strain was a factor in her decision. She struggled with her studies as her mental health became increasingly strained. “Basically I had the choice of doing what the hospital recommended outpatient, which wouldn’t work since I live 3.5 hours away, or not returning at all,” she says. “I personally believe that the stress is what caused my issues. Teachers should be more lenient. After all, we are just high school students.”

Difficulties with the unfamiliar environment of IMSA are not limited to dropouts. Current students also struggle with a variety of issues. For one anonymous sophomore, it’s the social aspect she’s missing from her new school. “It’s just hard to find the same connection you had before. Most connections formed over long years, and here you don’t have long years — you have three years.” Yet, she is still on the fence about whether or not she wants to leave. “I’m staying here because I think I might regret it — which is kind of a sad reason. I think I’ll regret the I-days and also the fact that I’m taking less classes, so I’m scared that if I go back, it will be a lot harder, which is like weird, you know what I’m saying? I feel like I get the same amount of work my old school, but it was easier because I had people, and here I feel like I don’t have people.”

One IMSA junior regrets that she did not take the opportunity to leave earlier in her academic career. “The only reason I haven’t is because I know the process is just not logical right now. I have one more year and going back to my old school wouldn’t make any difference.” Like the anonymous sophomore, she does not understand how she would be able to become integrated into a regular curriculum again.

For her, however, the problem is not necessarily with the students. She attributes her frustration to her strained relationship with the administration. “There are experiences here that I am thankful for but I find that a lot of the things that I am grateful for, like, you’ll hear a lot of people say that, ‘I stayed because of the friendships and the crazy opportunities I never expected.’ But honestly, I think the friendships that we form are so close because we go through so many unnecessary struggles here.”  Since many extracurricular activities and events are run by students, she wishes that adults would be more willing to form stronger relationships with them.

However, she does appreciate the diversity IMSA offers as a school with people of different ethnic backgrounds. The same is true for Grace Slekyo (’19), her friend. “I went a school that’s literally 90% white,” she says. “Coming here is just like, woah.” In her opinion, she has a tight-knit, small group of friends, and she is appreciative of being exposed to their various perspectives. While she does have frustrations regarding her academic experience, the student community is part of the reason she has decided to stay.

Even after struggling with IMSA at the beginning, some students have simply grown used to the environment over time. Sousha Rossi (’20), admits, “At the beginning of the year, I did question whether I should stay or not because I felt like I was inadequate for these classes. I can’t imagine going back. I like the teachers, I like the students, I like the way the classrooms are run, everything.” She is part of the student population still enthusiastic about the promise of the academy, despite the widespread dissatisfaction.

Ultimately, both students and former students harbor a wide range of grievances regarding the IMSA environment.  Reflecting on their choices to drop out, both individuals agree that it was a good decision.  For Amulya, she has her privacy and free time back, and the anonymous former student has recuperated after spending time with her family. IMSA is undoubtedly a difficult environment with people facing loneliness, stress, and frustration throughout their stay, but it is also a place of discovery and success for many. While students come in expecting to delve into the fields of math and science, perhaps they should also expect to learn something different, whether it is about the community or themselves.

To students contemplating the decision to drop out, talk to a RC or counselor. They are willing to listen and are there to help.

Special thanks to Katie Berger and Reuel Abraham for providing the data, and Grace Yue for making the graph.

Be the first to comment on "Why Can’t Students Seem to Stay?"