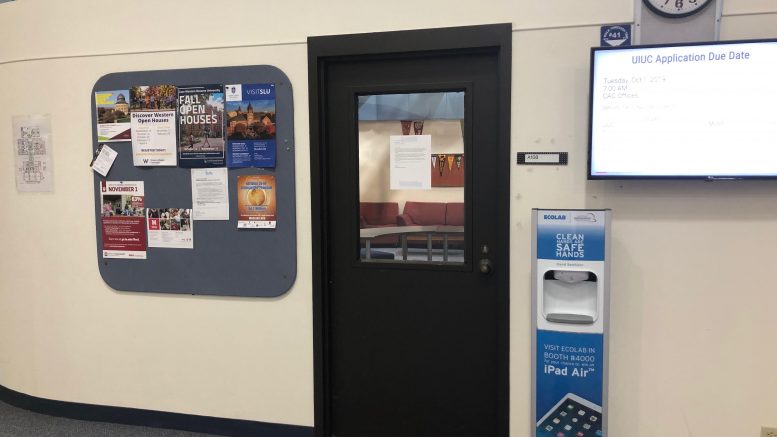 On Tuesday, September 17, Chief Hearing Officer Ms. Dana Ginnett and Director of Equity and Inclusion Dr. Adrienne Coleman received a notification of a bias incident on campus. A Black Barbie, hanging by a pink ribbon tied around her neck, was pinned onto the cork board in 1508, a space frequented by students for studying and socializing. After removing the evidence and addressing the students in the room, they launched an investigation to determine the perpetrator.

As members of Student Life and the Security Office began to review video recordings and organize student interviews, the IMSA community at large was kept in the dark of the incident. Ms. Ginnett informed IMSA president Dr. Jose Torres on Friday, September 20 about the investigations. However, it was not until the following Monday that passersby found a message on the door to 1508 noting a bias incident occurring there and the subsequent closure of the student lounge. It has remained closed ever since, with the exception of one college visit conducted for seniors. Students and parents received a clarifying email from the Director of Student Life, Katie Berger, about specific events and the progress of the ongoing investigation at approximately 8:30 pm. The email was forwarded to staff at around 7:00 am the following day, almost a full week after the initial incident occurred.

By Tuesday, September 24, most community members were aware of the events. Aurora Police Department interviewed Ms. Ginnett and Dr. Coleman to complete their report. Dr. Torres called a meeting with IMSA staff and faculty during mid-day break, from 11:55am to 12:20pm, to inform them with official information and IMSA’s response plan. Dr. Torres also notified the IMSA Board of Trustees and local legislators of what had occurred and the actions undertaken on the same day.

On Wednesday, September 25th, at the weekly operational coordinators meeting, department coordinators were provided with new information. Security had completed the video footage examination and was prepared to proceed to the next stage of their investigation.  While Dr. Torres sent a personal reflection containing a detailed timeline of events, this new phase in the bias incident investigation was not generally reported.

Students attended a mandatory program in their respective halls after 10 pm curfew check on Thursday, September 26th. The hall multicultural advisors (MAs), Peer Multicultural Educators, Black Student Union, and IMSA’s student council all contributed to facilitating these discussions with their peers. The residential counselors were in attendance at each hall’s program, providing supervision. At the program, the MAs discussed historic racism in America as well as the lynching of black people. Furthermore, they explicitly reviewed IMSA’s policy on bias incidents as per the student handbook in a Power Point. Students discussed their reactions and thoughts with each other during the presentation.

On Friday, September 27th, Ms. Katie Berger and Dr. Traci Ellis sent an update on the events of the week in an email to students, parents, and staff. They mentioned that while “investigation into the incident continues,” they were able to conduct disciplinary hearings and interviews based on the known information. They asked that the confidentiality of the disciplinary outcomes be respected as these matters continue.

The administration’s plans to re-establish a safe environment involve providing more educational opportunities and promoting discussion.  A town hall occurred on Monday, September 30th at 9:00 pm in the auditorium and was attended by Dr. Torres, Dr. Hernandez, Dr. Robinson, Mr. Bergie, Dr. Coleman, Ms.  Ginnett, Ms. Berger, and Dr. Ellis. The availability of IMSA counselors Kevin Kusy and Takeisha Rheams has also been promoted to the community. Given the widespread dissatisfaction with IMSA’s communication following the discovery of the doll in 1508,  Dr. Torres has directed student life staff to report any bias incidents immediately to him in the future.