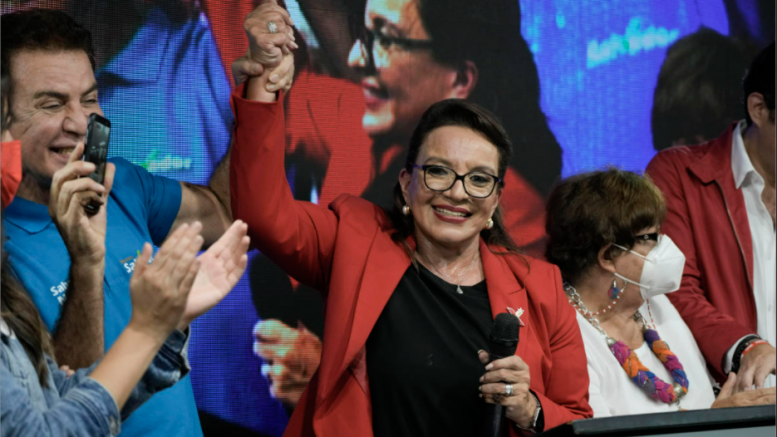 After the general elections in Tegucigalpa, Honduras on Sunday, November 28, 2021, 62-year-old Xiomara Castro was elected president of Honduras with nearly 51% of the vote.

Castro is a member of the leftist Liberty and Re-foundation, or Libre, Party which was founded by her husband and former president Manuel Zelaya, in 2011. In winning the election, she has broken a twelve-year ruling by the conservative National Party, has become the first female president of Honduras, and is the seventh female president elected in Latin America.

Her nearest rival in the election was Nasry Asfura, a member of the National Party. Many Hondurans were worried that this election contesting the National Party would result in a similar disaster to that which ensued in 2017. It resulted in street protests that left 23 dead and a curfew established by the government. Also, three weeks after that, Juan Orlando Hernández, a member of the National Party, was elected president despite an election redo being called for by the Organization of American States observation mission. This fear resulted in many boarding up their windows in Honduras’ capital for this election. Although to the relief of many, Asfura instead congratulated Castro for her victory.

Castro is not new to politics. She was the former first lady, which led her to be politically active in 2009 when she led protests of the coup backed by the military and business elites that forced her husband out of power. In 2013 and 2021, she represented her party in the run for presidency, and in 2017, in the run for vice presidency.

While former President Hernández dealt with allegations of state-sponsored drug trafficking, Castro wants to work to make reformations in the government to improve her country. She plans to work with the United States as they share common ground in at least three areas: immigration, drug trafficking, and corruption. Castro also has a progressive agenda when it comes to women’s issues with her government program having a chapter she has dedicated to gender issues. She plans to partially legalize abortion, something that has been very strictly forbidden in Honduras, and create shelters for females who are victims of domestic violence can find refuge in. Castro has shown this agenda from her time as the first lady when she founded the Coalition of First Ladies and Women Leaders of Latin America on Women and AIDs as an initiative in 2006. This group was created to prepare resources that could be brought to care for people, especially women, with HIV.

Castro’s husband was closely involved in her campaign, leading to some concerns of her election signalling the start of a political dynasty, much like the Ortegas, the ruling political family in Nicaragua since 2007. The former president is expected to serve as President Castro’s advisor. Héctor, Castro’s son, was her campaign coordinator for the 2021 election; and Hortensia, her daughter, and Carlón, her husband’s brother, are poised to serve as her deputies.