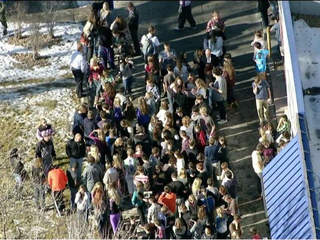 On December 13th, one day from the anniversary of the Sandy Hook Elementary School shooting, another school shooting took place at Arapahoe High School in Centennial, Colorado. Arapahoe High School has about 1,200 students. In response to the Arapahoe shooting, all other high schools in the school district of Little Public Schools (LPS) and some schools in Aurora and Douglas County were also placed under lock down. Two students were injured during the incident, but the only death reported so far is the death of the shooter himself. One of the students, however, has been admitted to the hospital with serious injuries and is in critical condition while the other one has suffered from a minor gunshot wound. The shooter died from a shot from his gun, and his body was found in a classroom on Friday (Denver Post).

CNN states that the shooter entered the school with the intent to confront a specific teacher. He entered, armed with a shotgun, and requested to see the teacher by name. However, the teacher fled the school upon hearing that the student had arrived to look for him. The teacher did not have any injuries. Students then reported hearing three consecutive shots. Employees and students claim that the shooter started in the front office and made his way to the library. At 12:30pm, firefighters from South Metro Fire Rescue were alerted. Hundreds of the students fled from the school once the shooting began, while others stayed in locked-down classrooms and waited for an hour until the police took them outside.

Aparahoe High School is coincidentally approximately eight miles east of Columbine High School, the site of another school shooting in 1999. Arapahoe is also about 15 miles southwest of the movie theater shooting in July 2012 (NBC).

ABC News reports that the shooter was a male student who attended Arapahoe High School. No other weapons were found at the school other than the shotgun, and it seems that the shooter did not have any accomplices but investigators are still trying to locate a second suspect.

Be the first to comment on "2 Injured, 1 Dead at Arapahoe High School Shooting"