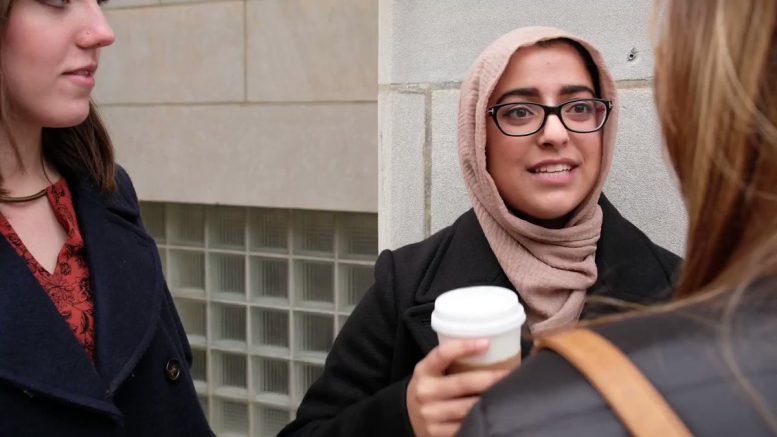 On Wednesday, October 24th, nineteen-year-old DuPage county board candidate Hadiya Afzal came to IMSA’s Ac Pit to speak about her experiences with politics through an event hosted by Coalition Z. She spoke of her decision to run for county board along with the importance of politics, answering questions and giving advice to the students in attendance.

The goal of the event was to give IMSA students an opportunity to meet a teenager who is influencing politics on both a local and national level. Ms. Micklo provided a brief introduction by mentioning her daughter’s work as a part of Miss Afzal’s campaign, before passing the mic over to Hadiya Afzal herself.

A repeated topic in Miss Afzal’s speech was the importance of being politically involved:

“People need a voice from someone like us. Someone who is young, who comes from a different background, can offer a different perspective on these wildly local, community-level issues. I have been through the public school system in my area, have had friends who’ve had to go to rehab for a drug addiction, who’ve died from drug overdoses; I know classmates who’re going to COD (College of DuPage) now, who are stuck in traffic for hours into class. I live right next to COD, I’ve been stuck in that traffic myself, just trying to go to school.”

She continued, explaining how the representation in the board should match the people whom the board is representing. The DuPage County has a large population of immigrants, refugees, and women, all of whom do not have proper representation on the county board. Miss Afzal plans to change that, one voice at a time.

With her brown skin and headscarf, Hadiya Afzal has had her fair share of intolerance along the campaign trail. However, she still remains optimistic about her experiences:

“I walked [around Wheaton] and I saw that people were willing to talk to me, willing to tell me their problems. It’s hard to be racist to someone who’s like: ‘Hey, tell me your problems, I’ll go fix them for you.’ You can’t just tell them to go screw themselves.”

When asked about her most uplifting moments from her campaign, Afzal declared that it must have been canvassing, and what she learned as a result of it.

“I think that [canvassing] is the most uplifting thing about this campaign; the fact that, you know what, if you stand strong in your beliefs, and your core principles are right, and your heart’s in the right place, you can talk to anyone. And then you’ll make a dent in their political opinion.”

Miss Afzal placed strong importance on the individual concerns of everyone in her district, as seen on her campaign website, where she says, “I may be running as a Democrat, but I’m running for everyone in District 4.” She emphasized the importance of listening to both Democrats and Republicans because, even though she’s running as a Democrat, she believes that important conversations can be had, even between people who have fundamental political differences.

“It’s important to get involved here, at the smallest level, where I can make the biggest difference.”

Want to learn more about Hadiya Afzal? You can check her out at her campaign website, this Huff Post video, or this Teen Vogue article.

Shivani Venkatraman grew up in Aurora, Illinois, and at IMSA she lives in 1506 C-Wing. She loves all kinds of writing, from fantasy to scientific articles, and enjoys sharing her interests with the people around her. She's super excited to be a senior and her second year as a graphic designer for Acronym. Outside of writing and design, she likes drawing, reading, listening to music, and singing. She has an adorable little sister whom she will use any excuse to mention, and loves playing video games. She thinks Acronym is pretty cool and hopes people enjoy her work.

Transition to Democracy Interrupted by Military Coup in Sudan

Be the first to comment on "Youth in Politics: Hadiya Afzal"