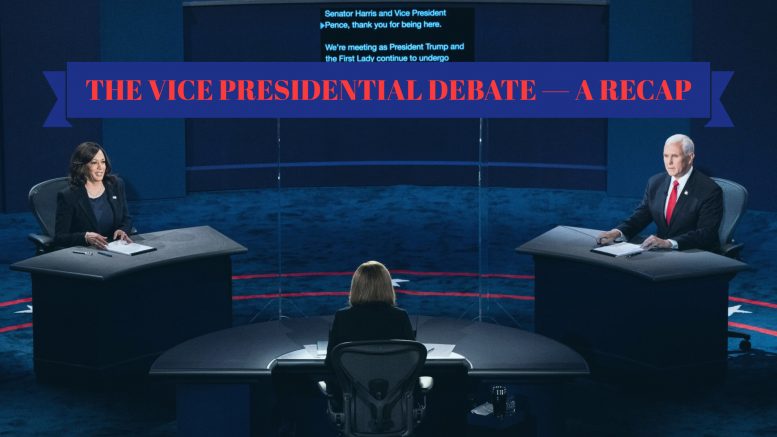 On Wednesday October 7, 2020, the first and only vice presidential debate of the 2020 presidential race was held between Senator Kamala Harris, D-Calif., and incumbent Vice President Mike Pence, moderated by Susan Page of USA Today, at the University of Utah in Salt lake City on Wednesday. For the most part, the vice-presidential candidates’ primary objective is to support their ticket’s presidential candidate, rather than prove their presidential ability. This year, both candidates needed to show that they would be able to step up if the occasion arose considering that President Trump has now contracted COVID-19 and is 74 and Joe Biden is 77.

Here’s how it went:

Pence responded to a question about why America’s death rate is one of the highest among the wealthiest nations saying that the Trump administration’s actions were quick and timely, including his decision to block travel from China. He claimed that Biden opposed this decision calling it xenophobic. He also claimed that the Biden plan for dealing with COVID-19 was similar enough to the Trump Administration’s plan that it could be considered plagiarized.

The Role of the Vice President

Pence refused to answer a question about whether he and Trump had decided upon any safeguards or procedures in case of presidential disability and instead continued discussing COVID-19.

When Harris was asked the same question, she cited her experience and monumental achievements as evidence of her ability to perform in the instance that Biden would not be able to.

Pence skirted around a question about how transparent presidential candidates need to be about their health. Harris used the question to bring up Trump’s taxes and raised concerns about how ”the American people have a right to know what is influencing the president’s decisions” referring to his alleged $421 million in debt. For more information about Trump’s taxes, read “The President’s Taxes: Losses And Avoidance.”

Harris stated, “Joe Biden believes you measure the health and the strength of America’s economy based on the health, and the strength of the American worker and the American family. On the other hand, you have Donald Trump, who measures the strength of the economy based on how rich people are doing.” referring to the Trump tax cuts which Harris promised that Biden would repeal if elected. She said that Biden would invest in infrastructure, clean and renewable energy, innovation, and education. Specifically, she said if you come from a family that makes less than $125,000, you’ll go to a public university for free and student loan debt will be cut by $10,000. She made it clear that Biden will not raise taxes on anybody who makes less than $400,000 a year.

Pence said that because Trump fought to cut taxes, to roll back regulation, to unleash American energy, for free and fair trade, and to secure $4 trillion from Congress to give to families, he added back 11.6 million jobs of the 22 million jobs lost and he saved 50 million jobs through the paycheck protection program. He said that “the American economy, the American comeback is on the ballot with four more years of growth and opportunity.”

Pence started off by saying he was proud of the Outdoors Act signed by President Trump and how United States air, water, and land are cleaner than any time ever recorded. The Outdoors Act, the largest investment in our public lands and public parks in 100 years. He insisted that the Paris Climate Accord and Green New Deal would crush American energy and burden American families and jobs. Pence said that with regard to wildfires, a Trump administration would focus on forest management

Unlike Pence had insisted, Harris said that a Biden administration will not end fracking. She cited Moody’s, a reputable Wall Street firm, to say that Biden’s plan would create 7 million more jobs than Trump’s. “ Joe is about saying we’re going to invest in renewable energy, we’re going to be about the creation of millions of jobs, we will achieve net-zero emissions by 2050, carbon neutral by 2035,” said Harris.

Pence aligned with the President’s remarks earlier this week blaming China and the WHO for the coronavirus. Calling Biden a cheerleader for China, Pence contrasted Trump’s decision to suspend all travel from China as standing up strong to China.

Looking at the “trade war” with China, Harris pointed out the resulting loss of over 300 manufacturing jobs, manufacturing recession, and the American consumer paying more. Referring to Trump’s preference of Putin’s word over American Intelligence, Trump’s decision to leave the Iran nuclear deal, and alleged isolationism, Harris contended that Trump doesn’t understand the value of a promise because of an inability to be honest.

Pence disagreed citing the move of the American Embassy to Jerusalem and taking down ISIS leader al Baghdadi.

When asked about overturning Roe v Wade, Pence said, “I’m pro-life. I don’t apologize for it,” but he couldn’t presume the way Amy Coney Barrett would vote if confirmed. He then challenged the idea of adding seats to the Supreme Court.

Harris referred to President Lincoln’s decision, 27 days before the election, when a seat became open on the United States Supreme Court, to wait until after the election. She declared that it should be the American people’s decision about who will serve on this most important body for a lifetime.

Harris said that she doesn’t believe that Breonna Taylor got the justice she deserves. She indicated that a Biden Harris administration would form policing in America and our criminal justice system, banning chokeholds and carotid holds. They would require a national registry for police officers who break the law, get rid of private prisons and cash bail, decriminalize marijuana, and expunge the records of those who have been convicted of marijuana. .Pence responded saying that in the case of Breonna Taylor, he trusts our justice system.

Harris then reflected on the presidential debate where the President refused to condemn white supremacists, on how he called Mexicans rapists and criminals, his Muslim ban, and his response to Charlottesville.

Pence claimed that those instances were selectively edited. Looking at Harris’ history, he also pointed out how her work may have disproportionately affected marginalized communities. Harris defended her record even giving the example of how she instituted a requirement to wear body cameras

When asked about the transfer of power, Harris stated that Joe Biden has a “deep-seated commitment to fight for our democracy and to fight for the integrity of our democracy” and then proceeded to plead with the American people to make use of their vote.

Pence was asked the same question considering Trump’s statement about not accepting a Biden win and he responded saying that he thinks they will win this election. He accused the Democratic party of trying to overturn the results of the last election and spying on the Trump campaign.

Pence – “We love a good debate. We love a good argument. We always come together and are always there for one another. And we’ve especially learned that during the difficulties of this year.”

Harris – “Brecklyn, when you think about the future, I do believe the future is bright. And it will be because of your leadership, and it will be, because we fight for each person’s voice through their vote. And we get engaged in this election, because you have the ability through your work, and through, eventually, your vote. To determine the future of our country, and what its leadership looks like.”