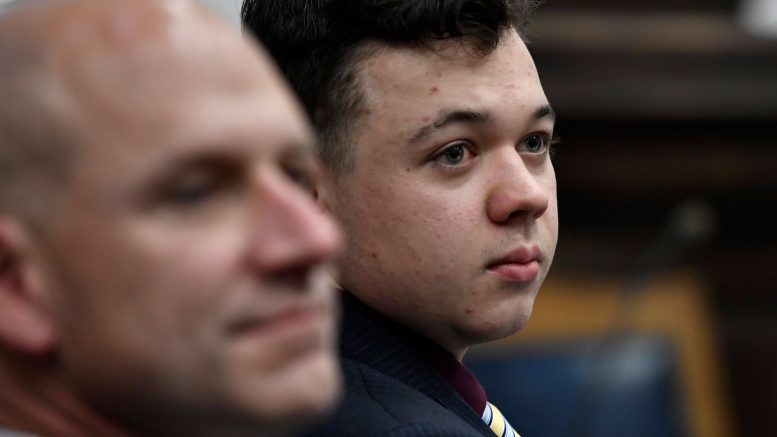 Kyle Rittenhouse, right, and his attorney Corey Chirafisi listen during his trial at the Kenosha County Courthouse in Kenosha, Wis., on Thursday, Nov. 11, 2021. Rittenhouse was accused of killing two people and wounding a third during a protest over police brutality in Kenosha, last year. (Sean Krajacic/The Kenosha News via AP, Pool)

On August 25, 2020, 17-year-old Kyle Rittenhouse shot three men, killing two of them, in Kenosha, Wisconsin. The shootings occurred amid the unrest that followed the police shooting of Jacob Blake, a black man. Rittenhouse carried a Smith & Wesson semi-automatic rifle, which he brought to protect a car dealership from protestors, as well as a first-aid kit to provide medical assistance. Rittenhouse was known as an avid supporter of the police and the Blue Lives Matter movement.

After Rittenhouse left the dealership, a group of people chased him into a parking lot. One of Rittenhouse’s pursuers fired a handgun into the air and Rittenhouse turned toward the noise. An unarmed Joseph Rosenbaum then lunged toward Rittenhouse, who fatally shot Rosenbaum as he attempted to gain control of the rifle. Rittenhouse fled the scene, soon pursued by around a dozen more people who identified him as “the shooter.” He tripped and fell while running, and shot two other people after one (Anthony M. Huber, who was hit in the chest and died shortly after) hit him with a skateboard and another (Gaige Grosskreutz, who survived a shot in the arm) pointed a handgun at him. Rittenhouse also missed two shots at a man who attempted to jump-kick him. Rittenhouse turned himself in to the police the next day, on August 26.

The Charges and the Verdict

The trial began on November 1, 2021 in Kenosha and ended on November 19 with a verdict declaring Rittenhouse not guilty on all counts. Bruce Schroeder served as the trial judge. Rittenhouse faced the following seven charges in court:

The jury was convinced by Rittenhouse’s and other witnesses’ testimonies, as well as video evidence, that Rittenhouse only shot to defend himself. Rosenbaum was chasing Rittenhouse and lunged toward him instead of fleeing when Rittenhouse pointed a gun toward him, Huber struck Rittenhouse with a skateboard, and Grosskreutz pointed a pistol at Rittenhouse. Though the prosecution team did point out several inconsistencies, they failed to undermine the defense’s claims. In addition, Rittenhouse’s testimony served to further humanize him to the jury.

The trial has also been brought into the limelight because of some of the prosecution’s allegedly questionable actions. For instance, Thomas Binger (the lead prosecutor) pointed out how Rittenhouse remained silent after his arrest and only spoke publicly after other witnesses had also testified. Binger insinuated that Rittenhouse waited until the trial to match his testimony with that of witnesses. The judge severely admonished Binger for attempting to violate Rittenhouse’s right to remain silent after his arrest, guaranteed by the Fifth Amendment to the United States Constitution. Additionally, the prosecution team tried to bring a prior incident to the jury’s attention that the judge had already ruled could not be shown during the trial, and they also allegedly provided a lower quality surveillance video to the defense team than what they used during the trial. The defense filed a mistrial request due to what they viewed as the prosecution’s overreach.

Furthermore, the prosecution team made several statements during the trial that were later deemed illogical. They attempted to connect Rittenhouse’s interest in first-person shooter video games, such as Call of Duty, with his actions in Kenosha. The American Psychological Association maintains that there is no correlation between video games and physical violence. The prosecution also asked the seemingly irrational question of why Rittenhouse was urgently running during a fire, to which Rittenhouse responded “it was a fire.” The video of the interaction between Binger and Rittenhouse went viral on several social media platforms, including Twitter.

The media has extensively covered many elements of the trial, including Rittenhouse’s successful self-defense argument. Microsoft/National Broadcasting Company (MSNBC) in particular was quite interested in the trial, so much so that one of their reporters was caught following the jury bus in an attempt to photograph jurors, even though they are required to remain anonymous. The judge subsequently banned MSNBC from the courtroom.

Reactions to the trial and verdict in the mainstream media have speculated about the wider political scene in the United States. Several letters to the editor in the Los Angeles Times claim that the verdict will serve as encouragement for more “vigilantes,” connect it to the trial of Ahmaud Arbery’s killers and the censure of Republican Representative Paul Gosar, argue that Rittenhouse would have been convicted if he were black, and characterize Rittenhouse as one of the violent extremists who want to impose “racist fascism” in the United States. Other media coverage of the trial links it to race and gun rights; numerous protests and demonstrations have also emerged across the country following the verdict. In general, Kyle Rittenhouse’s acquittal has been viewed as a victory for political conservatives and gun freedom activists.

17-year-old Kyle Rittenhouse killed two and wounded one with a rifle in August 2020. During his trial in November 2021, he faced several homicide and endangerment charges, the most severe of which would have resulted in a mandatory life sentence with a conviction. Rittenhouse was acquitted of all charges on November 19 after a successful self-defense argument. The trial has made the news due to its political nature and several missteps by the prosecution. Protestors and the mainstream media generally view the acquittal as a victory for American conservatives.

Transition to Democracy Interrupted by Military Coup in Sudan

Be the first to comment on "The Trial of Kyle Rittenhouse"