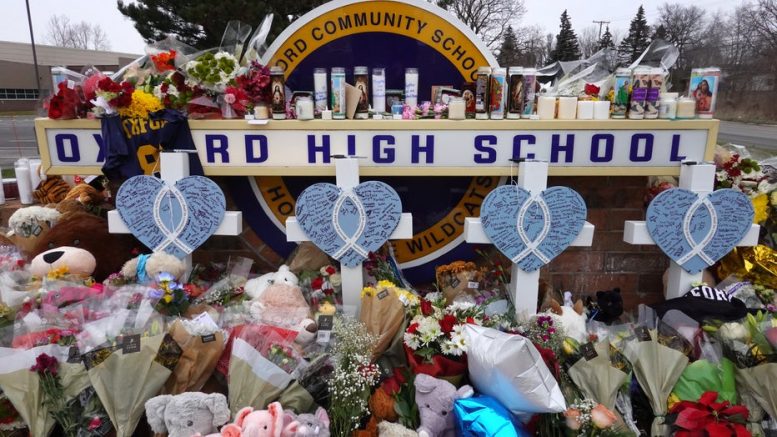 A memorial outside of Oxford High School after four students were killed in a shooting on Nov. 30, 2021. | Photo credit: Scott Olson

Around 1 p.m. on Tuesday, Nov. 30, 15-year-old sophomore Ethan Crumbley came out of a bathroom in Oxford High School with a handgun and started firing, promptly killing four students.

A few days after the shooting, the district’s superintendent requested an independent investigation into the incident. Tim Throne, the head of the Oxford Community Schools district, detailed in a letter on Dec. 4 the school’s account of several key events leading up to the shooting.

The Day Before the Shooting

On Nov. 29, the Monday before the shooting, a teacher saw the shooter looking at photos of ammunition on his cell phone in class and called for a meeting with a counselor and one other staff member.

In this meeting, Crumbley explained to the staff members that he and his mother had recently gone to a shooting range and that “shooting sports are a family hobby,” Throne wrote in the letter.

According to the letter, the school tried to contact the shooter’s mother, but she never responded. She did, however, text her son saying, “LOL I’m not mad at you. You have to learn not to get caught,” prosecutors revealed.

The Morning of the Shooting

On Nov. 30, the day of the shooting, a teacher alerted school counselors and the dean of students about “concerning drawings and written statements” that Crumbley had created, according to Throne’s letter.

He was “immediately removed from the classroom” and sent to a guidance counselor’s office, where he told a school counselor that “the drawing was a part of a video game he was designing.” He went on to inform counselors that he “planned to pursue video game design as a career,” Throne wrote in his letter.

After the conversation about his drawings and statements, Crumbley stayed in the office for over an hour as staff called his parents and waited for them to arrive at the school. While they were waiting, the shooter said he was concerned about missing homework assignments and “requested his science homework, which he then worked on while in the office,” the letter noted. “At no time did the counselors believe the student might harm others based on his behaviors, responses and demeanor, which appeared calm,” Throne said.

Once the parents arrived at the school, the school counselors asked the shooter more questions, which “led counselors to again conclude he did intend on committing either self-harm or harm to others,” according to the letter.

The counselors urged Crumbley’s parents to seek counseling for their son within the next 48 hours, otherwise, the school would contact Child Protective Services, Throne wrote. The parents refused to take the shooter back home and instead returned to work. Because he had no previous disciplinary issues, the counselors allowed him to return to class. They did not inform the principal or assistant principal of this decision, according to Throne.

“While we understand this decision has caused anger, confusion and prompted understandable questioning, the counselors made a judgment based on their professional training and clinical experience and did not have all the facts we now know,” Throne explained.

Karen McDonald, the Oakland County prosecutor who is leading the case, said Crumbley allegedly had the gun in his backpack during the meeting with the school officials and his parents.

The shooter started firing “during passing time between classes when hundreds of students were in the hallway transitioning from one classroom to the other,” Throne detailed in the letter.

Students and staff were fast to act though. “Before the shooter was able to walk a short distance to enter the main hallway, students and staff had already entered classrooms, locked doors, erected makeshift barricades and locked down or fired according to their training,” Throne wrote. “The suspect was not able to gain access to a single classroom.”

Just before 1 p.m., authorities received a 911 call about an active shooter at the school, according to the Oakland County Undersheriff Michael McCabe. More than a hundred 911 calls came in to dispatch after that.

The shooter fired at least a dozen shots before he was taken into custody. When he was arrested, the Sheriff noted that the shooter had an additional 18 rounds of ammunition on him.

Students were evacuated and taken to a nearby store’s parking lot to be reunited with their families. 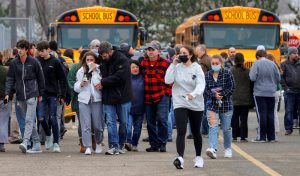 Parents walk with their children in the Meijer grocery parking lot, where students gathered after a shooting took place on Nov. 30, at Oxford High School in Oxford Township, Michigan. || Photo credit: Eric Seals

Hana St. Juliana, the youngest person killed, was a freshman. She played on the volleyball and basketball teams at the high school. At the Dec. 1 news conference, McDonald said the girl’s parents wanted people to know that their daughter was “one of the happiest and most joyful kids.”

Tate Myre was a linebacker and tight end on the school’s football team. He had just recently earned an all-region award from the Michigan High School Football Coaches Association. He was described by his classmates as being incredibly well liked and funny, “a sarcastic, joking person,” and a very intelligent student. He died in a patrol car as deputies were taking him to the hospital.

Madisyn Baldwin was described by her grandmother as a “beautiful, smart, sweet loving girl.” She was also a “talented artist and big sister,” McDonald announced at the Dec. 1 news conference.

Justin Shilling was on the Oxford Wildcats boys’ bowling team. He had scored a match victory in March, which helped lead the team to a 30-0 win.

Many were in critical condition, as well. A 15-year-old boy was shot in the head, and a 14-year-old girl was shot in the neck and chest and was put on a ventilator, according to Sheriff Michael Bouchard.

Charges Against the Shooter

The shooter was charged as an adult with two dozen crimes including first-degree murder, attempted murder, assault with intent to commit murder, gun crimes, and terrorism causing death. His defense attorney Scott Kozak entered a plea of not guilty. 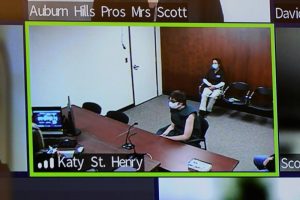 McDonald said the shooting was premeditated, based on a “mountain of digital evidence” against the shooter. “This was not just an impulsive act.”

After the shooting, two videos the shooter had made the night before were found on his cell phone. In these videos, he discusses shooting and killing students at the school. Investigators also found a journal in his backpack that detailed his “desire to shoot up the school to include murdering students.”

According to Fox 2 Detroit, there was also a shocking post on the shooter’s Instagram account that allegedly read, “‘Now I become death, destroyer of worlds.’ See you tomorrow Oxford.” The post has since been deleted.

Four days before the shooting, the shooter’s father James Crumbley bought the gun used in the shooting. Shortly afterward, the shooter posted a picture on his Instagram of the gun with the caption, “Just got my new beauty today. SIG SAUER 9mm” with a heart-eyes emoji, McDonald said. McDonald also explained that Jennifer Crumbley posted a photo of the gun on social media, calling it “[Ethan’s] new Christmas present.”

“He deliberately brought the handgun that day with the intent to murder as many students as he could,” assistant prosecutor Marc Keas said while arguing for no bail for the shooter and a transfer to jail from a juvenile facility. “There is nothing that he could have faced that would warrant senseless, absolutely brutal violence on other kids,” the Sheriff said in response to the shooting.

“It’s going to terrorize a generation of these kids who were in the school. The impact is on thousands of people,” said Matthew Schneider, a former federal prosecutor who is not involved in the case and who was previously the state’s chief deputy attorney general.

Be the first to comment on "Oxford High School Shooting"