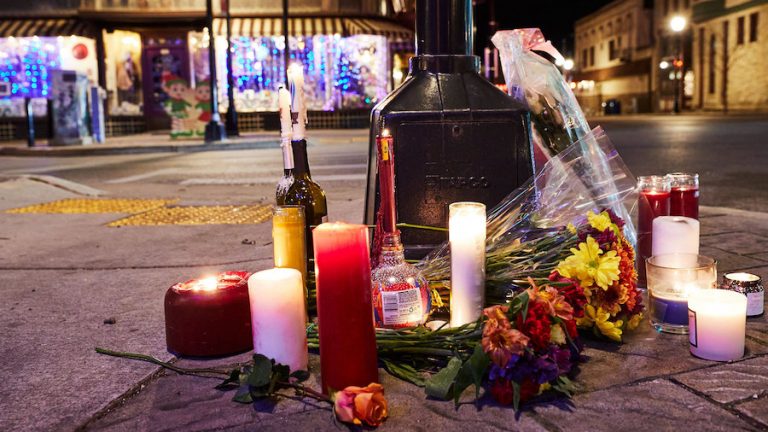 Waukesha citizens held a moment of silence exactly one week after the Christmas Parade tragedy. (KSL-TV)

On November 21, 2021, the 39-year-old Darrell E. Brooks allegedly drove an SUV through the Christmas Parade in Waukesha, Wisconsin. The tragic incident killed six people, including an eight-year-old boy, and injured 62 others. Police officers attempted to stop the SUV by banging on its hood and firing a gun. The car was traveling at 40 miles per hour in a weaving motion to hit as many people as possible, as police believe that Brooks intentionally targeted the crowd. The parade was live-streamed on the city’s official website, and clips of the disaster also went viral on social media. Brooks is currently being held in police custody.

The initial five dead were between 52 and 81 years old. Three of them, Virginia Sorenson, Leanna Owen, and Tamara Durand, were performing as part of the Milwaukee Dancing Grannies group. The other two, Jane Kulich and Wilhelm Hospel, were there to enjoy the parade, a decades-long tradition. Many other people were hospitalized, including children. Most recovered, but one child, Jackson Sparks, tragically passed away in the hospital. Sparks had undergone brain surgery shortly before the event, and his older brother was also hit and suffered a fractured skull. Fortunately, those who were injured are in stable condition and are expected to survive.

The suspect, Darrell E. Brooks, has an extensive criminal history. Immediately before the parade disaster, Brooks had been involved in a domestic incident. He has also faced previous charges of reckless endangerment and possession of a firearm as a felon. In addition, Brooks has an active arrest warrant and is a registered sex offender in Nevada. Court documents state that Brooks ran over a woman on November 2, 2021 (using the same SUV that police confiscated after the parade) and was released from custody after posting bail for $1000. The woman, who claims to be the mother of Brooks’ child, was seen with tire tracks on her pants leg. Brooks faced several charges after the incident, including bail jumping after an incident in July 2020.

After the parade tragedy, Brooks fled the scene to a nearby house and asked to use the resident’s phone to call an Uber, claiming to be cold and homeless. The homeowner, Daniel Rider, let Brooks into his home and gave him a sandwich and a jacket, unaware of the incident that had just transpired at the parade. In Rider’s doorbell camera video, police are shown arriving at the house and telling Brooks to put his hands up. Brooks was arrested and taken into custody shortly after.

Brooks has been charged with five counts of first-degree intentional homicide and is likely to face a sixth due to the death of Jackson Sparks after the parade. The former Waukesha County District Attorney stated that intent would be evident to jurors during a trial, as there is no indication that Brooks decelerated at any time during the incident. Additionally, an officer who tried to stop the SUV from the front claimed that there was no emotion visible on Brooks’ face as he drove through the crowd. Legal experts have said that the possible influence of alcohol or drugs could not be used as a legal defense in Wisconsin, but that the insanity defense could place Brooks in a mental hospital instead of in prison. Brooks’ bond has been set at $5 million because authorities view him as a flight risk.

Darrell E. Brooks has prompted a conservative response against bail reform from those who believe that his initial bond of $1000 was too low, considering his prior criminal record. An editorial from the New York Post articulates this sentiment, claiming that progressive policies of criminal justice reform allow those who post a cheap bail to “‘go out and kill somebody.'” The Milwaukee County District Attorney’s office has conceded that the $1000 bail was “inappropriately low,” and they are investigating why the low bail decision was made. Regardless of Brooks’ low bail before the parade tragedy, he is highly unlikely to post his current $5 million bail and now faces a potential life sentence in prison.

Be the first to comment on "The Waukesha Parade Tragedy"