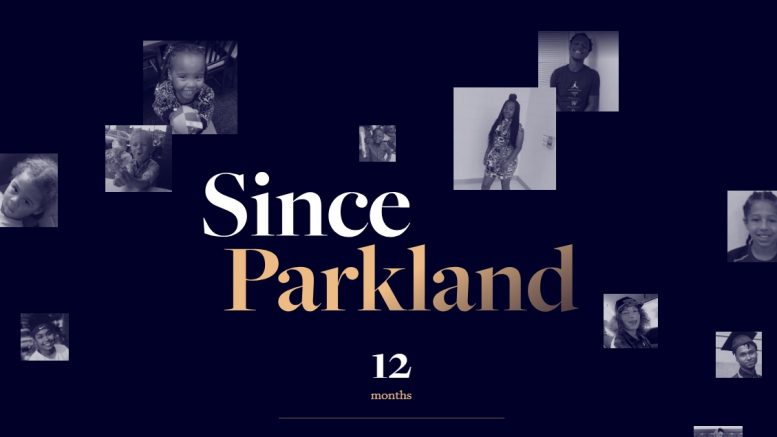 Go to sinceparkland.org to learn more.

A few weeks ago, my mom told me about my relative, Ochari D’Aiello. He was black, Italian, and Jewish. He was intelligent, a natural born leader, and socially active. He is also dead, fatally shot in 1992 while attending a summer program at Morehouse College in Atlanta that he hoped would deepen his connection to his black roots. A classmate of his at the time wrote an article about his death, pleading with society to help mitigate the pervasive problem that was (is) gun violence in America.

In her conclusion, she wrote, “I read in the newspaper that every day eight people die in the United States as a result of gunshots. I urge you to act now before another eight are killed tomorrow.”

Ochari was killed in 1992, and a similar statistic remains. Thousands of children and teens died in 2018 from gun violence.

In collaboration with The Trace and the Miami Herald, I wrote about more than 35 of them.

I wrote about Davonte Friedman, who recently attended a leadership program dedicated to preventing violence. He told his mom that he didn’t want any gifts for his 18th birthday, that he was just glad to be alive. He was fatally shot a week later. 18 years old.

I learned about Addison Sanders, whose curly hair looked just as untameable as mine did at her age. She, like me, had a twin brother. His name was Mason. They both died after their father, who had joint custody of them, killed them both and then turned the gun on himself. 10 years old.

I fell in love with the radiant smile of Christopher Charles Williams Jr. One day, he picked up a loaded pistol from the couch in his home, pointed it at his head, and pulled the trigger. He died. He was 2 years old.

I cried for Tarique Morris, who looked around, silently, after the car he was traveling in was riddled with bullets. He kept putting his little hand inside the much larger one of the policeman rushing him to the hospital. They were too late, and he died, along with his parents. He was 3 months old. 3 months old. He was the youngest child to die this year of gun violence, so little that his age on the website containing all of the stories is written as 0: they rounded down.

“Since Parkland,” a yearlong editorial project dedicated to honoring the lives of every person between the ages of 0-18 who died due to gun violence (excluding suicides, for reasons that are explained here), released around one week ago. We received coverage from The New York Times, Al Jazeera, The Hill, CBS News, ABC News, Fortune, Associated Press, Teen Vogue, CNN, and more. The Editorial Board of The Washington Post wrote an op-ed about us. We did radio, phone, and television interviews for local, regional, national, and even international outlets. The project was promoted by 3 confirmed presidential candidates, as well as countless other politicians, celebrities, and activists, not to mention normal civilians who were overwhelmed by the sheer loss that our society has experienced due to gun violence and felt compelled to speak out. NowThis, our social media partner, curated a beautiful video in remembrance of the victims whose stories we told. The Miami Herald and other McClatchy papers dedicated ten pages of their Sunday newspaper to “Since Parkland” content, including printing the names of every single child killed by gun violence over the course of the year. The point is, though our lovely PR firm, We Are Rally, is in part responsible for the massive amount of people we reached with our work, the reaction should also be attributed to the nature of the project. We touched a nerve.

It is an inexplicable feeling to see the introduction that four student journalists and I authored quoted in The New York Times, to read in the The Washington Post that “those who favor sensible gun laws can draw some hope and inspiration from the energy and passion of young people such as those responsible for ‘Since Parkland’ who are determined to write a new ending to America’s story of gun violence.” Articles such as those validated months of late night research, poorly contrived excuses for why I was receiving Slack messages about obituaries, emotions that I didn’t even realize I was holding in until I sobbed for an hour the night after completing three interviews for the project, when I should have been so unbelievably happy because I appeared on television for two major news networks but all I could do was keep reading stories about Alyssa Alhadeff’s mom writing a Valentine’s Day letter to her dead child and Jamie Guttenberg’s father wondering if he said “I love you” before she walked out the door to never return and clicking and clicking and clicking on names and stories with no end in sight. I’m not ashamed to say that I cried. I wrote about a 3-month-old baby: I would be more concerned if I didn’t.

As is the case in a society that receives a crushing barrage of headlines every day, the coverage of our project is winding down. However, just because the interview requests are fading does not mean that the project itself, or its message, should fade as well. Excluding suicides, approximately 1,200 American children died from gun violence since Parkland until February 14th of this year. The majority of these deaths were not mass shootings, but domestic violence. They disproportionately affected African-American males. Most of them were never a headline. Sometimes, it took hours to find even a name, a casual mention on a Facebook post or a comment on a news article. Sometimes, there was no name to be found.

I combed through thousands of articles, GoFundMe’s, Facebook profiles, pictures of toddlers holding a guitar backward and high school graduations and football games and goofy faces and I would sometimes forget that they had died because they all just seemed so full of life. But they did. Die.

Children are dying. Children are dying every single day, and it’s not just the school shootings that we hear about on the news. Those are absolutely horrific and deserve to take up space and each life lost deserves to be mourned. But so does the life of David A. Thomas, who was shot in the face on the West Side of Chicago. There is no obituary, nor an article that states more than the bare facts of the shooting. So does the life of the 18-year-old boy who was shot multiple times in the chest and ultimately killed while riding his bike. There was no mention of his name anywhere.

It hurts to read the stories of these children, but the hurt is necessary. They are dead. They don’t get to lose their first tooth or say their first word or to read another book or fall in love or experience heartbreak or laugh so hard they start crying. They are dead, and we need to carry that burden. We need to remember their stories, headlines and unnamed. We need to remember them all.

If you’re curious about some of the coverage we’ve generated, click on the hyperlinks above.

If you haven’t visited the website already (and even if you have), click here. Read as many profiles as you can mentally handle, and allow yourself to feel overwhelmed. That’s the point.

This article is dedicated to Ochari D’Aiello. From what I’ve heard, we have a lot in common, and I wish I could have met you. I’m so sorry our world is such that I never will.

1 Comment on "I Reported on Gun Violence for the Past Six Months: Here’s What I Learned"