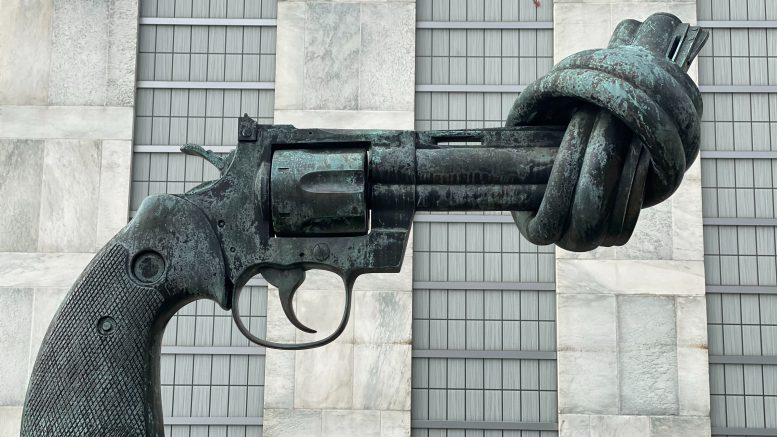 A sculpture of a knotted gun outside the United Nations headquarters in New York City. | Maria Lysenko

Recently, it has been reported that Canada is set to ban 11 categories of assault rifles, along with other weapons, following a recent mass shooting that occurred in the country on April 18th and 19th. The murder of 22 people in Novia Scotia marks Canada’s deadliest mass shooting yet in its history. Prime minister Justin Trudeau was quick to respond: “These weapons were designed for one purpose only: to kill the largest number of people in the shortest amount of time… There is no use and no place for such weapons in Canada.” This new policy is so extensive that it’s projected to prohibit the use, purchase, sale, and transportation of 1,500 different assault-type weapons and affect over 72,000 gun-owning Canadians.

The swiftness and efficiency of this policy is something to be admired. Americans — students in particular — know all too well how lacking our country’s gun control policies are, considering the frequency of shooting incidents in both public schools and other settings. The extent of government or officials’ responses when it comes to mass shootings seem to only toggle between “thoughts and prayers” or simply silence. And this has been going on for incredibly long: since the early 2000s: a sudden call to attention toward stricter gun control laws, then a fading interest and inaction until the next deadly shooting happens. Most of our generation has been here for both the shootings themselves and the government’s lack of action. Though there’s really no reasonable excuse for a civilian to own any type of assault rifle, bans on the ownership of these guns never seem to actually fall in place.

A possible reason for this lack of action may be America’s unique and extremely polarized partisan politics. Although our country’s heavily divided political parties are not the cause of a variety of groups of people with diverse views, they do reflect them. There is a great deal of debate as to what extend the second amendment ought to protect gun ownership, explaining why a problem such as gun control often has such a delayed solution. The fact that President Trump himself is Republican further diminishes the possibility of any gun control laws to be enacted any time soon.

Meanwhile, Canada’s political parties aren’t so blatantly black and white, either for or against gun control. As can be expected, this makes it a lot easier for their government to make common-sensical snap decisions. Problem: assault rifles allow for mass shootings. Solution: ban assault rifles. No hesitation, no time wasted, and certainly more lives saved.

If the obstacle preventing the U.S. from taking actions that could save lives is within the country’s political system itself, it will take much more than just thoughts and prayers to get us through the crisis that is being unable to address acts of violence, mass murder, and the loss of innocent lives.

The Odd, Complicated, and Surprising Origins of Canadian Thanksgiving

Be the first to comment on "Gun Control in Canada"