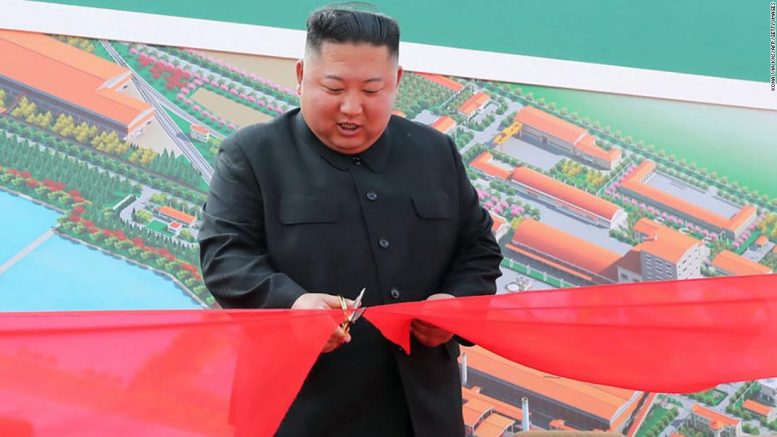 This picture taken on May 1, 2020 and released from North Korea's official Korean Central News Agency (KCNA) on May 2, 2020 shows North Korean leader Kim Jong Un (2nd R) attending a ceremony to mark the completion of Sunchon phosphatic fertilizer factory in South Pyongan Province, North Korea. (Photo by STR / KCNA VIA KNS / AFP) / - South Korea OUT / ---EDITORS NOTE--- RESTRICTED TO EDITORIAL USE - MANDATORY CREDIT "AFP PHOTO/KCNA VIA KNS" - NO MARKETING NO ADVERTISING CAMPAIGNS - DISTRIBUTED AS A SERVICE TO CLIENTS / THIS PICTURE WAS MADE AVAILABLE BY A THIRD PARTY. AFP CAN NOT INDEPENDENTLY VERIFY THE AUTHENTICITY, LOCATION, DATE AND CONTENT OF THIS IMAGE --- / (Photo by STR/KCNA VIA KNS/AFP via Getty Images)

Last week, for the class of US Government and Constitution, I worked alongside my fellow seniors Ethan Tse and Kara Warcup to design a contingency plan for the United States State Department given a succession crisis in North Korea. We chose our topic in large part due to the recent surge of stories theorizing leader Kim Jong-un’s failing health. Only recently have American and international news outlets been rebuked for the publication of these pieces as the Supreme Leader of North Korea appeared at the opening of a fertilizer plant on May 2nd after a 20-day hiatus from the public eye. Although the totalitarian nature of the state may incentivize foreign interest in any events which may indicate regime instability, many scholars warn that information about the secretive, restricted country should be vetted more than that of normal governments as the political news we do receive can have a direct influence on US foreign policy and therefore stability in East Asia.

Michael Madden of the BBC wrote in a May 2nd article that foreign powers have consistently relied on the hearsay of foreign operatives involved in the limited international trade of the Office 39 department of the North Korean government for their news on the overall state. These anecdotes, along with North Korean defector news sites like Daily NK, encourage international outlets to cite extremely limited information, building off each other’s reporting to justify entertaining headlines.

In a harsh review of Western media sources and their poor journalistic practices, Se-Woong Koo of Al Jazeera wrote in a May 6th article that Western media coverage of North Korea often leads to overextensions of an insignificant number of sources, leading time and time again to tension between the Koreas and the United States with announcements like “In North Korea, Missile Bases Suggest a Great Deception” and “US source: North Korean leader in grave danger after surgery.” Citing a pretty damning example of poor research, Koo describes the former, a New York Times’ article from 2018, as an overeager assessment of a single piece of photographic evidence which later proved to be dated incorrectly. While many journalists, politicians, and social scientists appreciate any glimpse into the daily functioning of the DPRK, Koo warns that “harmless” hot take stories help exacerbate the atmosphere of fear, irrationality, and rigidity which surrounds inter-Korean politics. While a country thousands of miles away may feel safe running a firebrand report of the DPRK based on little evidence, South Korea and other countries in the region deal with the military and political consequences of said mania.

Se-Woong Koo hypothesizes that one factor limiting the accuracy of Western news outlets is the trend of not having staff fluent in Korean, a weakness which necessitates translators and discourages qualified, conservative South Korean experts who do not speak English from adding their own perspective to combat that of English-speaking pundits and personally motivated defectors. Attesting to the quality of South Korean researchers, Cheong Seong-Chang of the Sejong Institute wrote on April 17th, during a North Korean news mania, “Although there may be a temporary issue with Chairman Kim Jong Un’s health or personal circumstance … the possibility of an emergency in the North is extremely unlikely.” The National Security Council of South Korea published a similar statement on April 23rd and its track record across multiple “crises” and gaps in Kim Jong-un’s public appearances speaks to the virtues of informed, nuanced reporting.

Be the first to comment on "DPRK News Coverage: A Pattern of Auto-generated Panic"