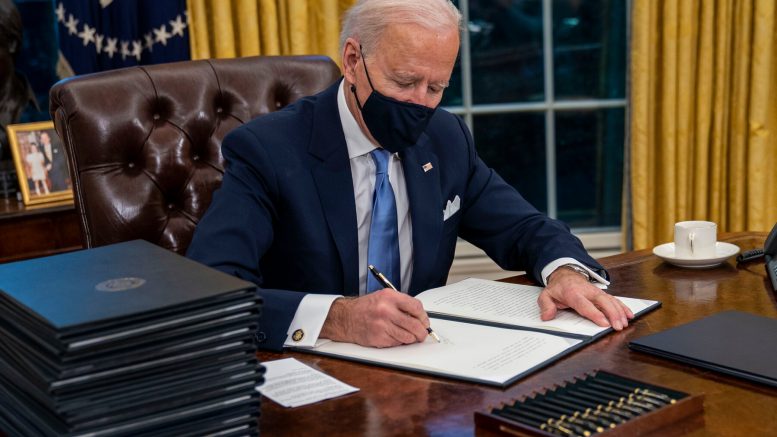 It has only been three weeks since President Biden took office, but he has already shaken American politics with his rapid flurry of executive actions. Just within his first three days as president, he signed 30 executive orders to take action on a range of issues from the coronavirus and climate change to immigration and global relations.

One of the very first actions President Biden took was to reverse many of Trump’s immigration policies, including stopping the construction of the wall on the border between the United States and Mexico. The border wall was one of Trump’s leading points in his 2016 presidential campaign, and the immediate halt of the construction shows the direct stance President Biden is taking on Trump’s policies.

Another big order that Biden signed was halting the construction of the Keystone XL pipeline. The Keystone pipeline is a transcontinental pipeline stretching from Alberta, Canada all the way to the Gulf of Mexico. Almost 300 miles of the pipeline had already been built when it was halted. This executive order is just another example of the harsh stand President Biden is taking against Trump’s policies, as continuing the construction of the pipeline was one of President Trump’s first executive orders in 2017. President Biden also rejoined the Paris Climate Accords showing his stand on Climate Change and directly accomplishing his campaign promises.

While Trump was president, immigration laws were heavily debated and often led to harsh consequences like the ICE raids. President Biden has tried to improve immigration policies in the United States within his first few days through his executive orders that support undocumented immigrants, asylum seekers, and other immigrants. One main effort from the president has been the full reinstatement of DACA after Trump’s effort to terminate the program. He has also lifted the immigration ban on seven Muslim-majority nations and stopped the expansion of immigration enforcement in the United States. Biden also increased protection and legal access for asylum seekers from Central America, thereby revoking the policies and guidelines set by the Trump Administration.

President Biden has brought urgency into his action as he has sought to address many challenges facing the United States. Many of his executive orders have focused on revoking Trump Administration policies while also acting upon a wide range of issues like immigration, climate change, and most importantly the coronavirus. With President Biden’s actions taking the country by surprise, we can only wait and see if the next four years will continue to be this eventful.