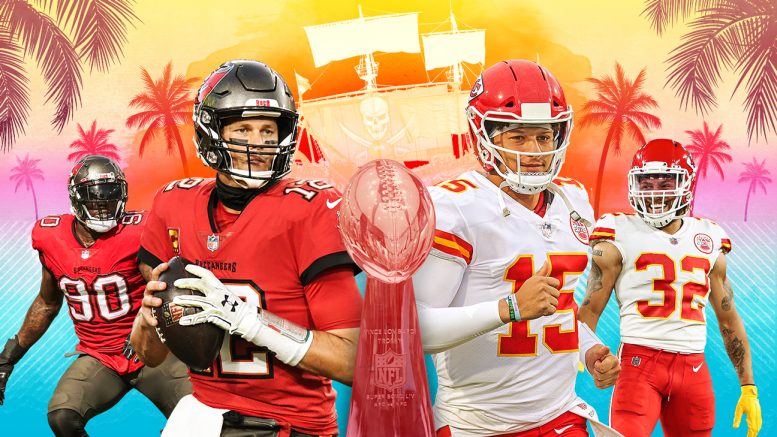 That’s all I can say about what just happened this past Sunday. But before I even talk about the actual events of the Super Bowl itself, I’ll start by talking about the history behind the game matchup. This game was so hyped up because of the QB matchup. Baby GOAT vs. GOAT. Mahomes vs. Brady. While I always thought that it was too early to even begin having the conversation of “Could Patrick Mahomes be the GOAT,” sports media thought differently. As a result, this Super Bowl became a must-see game in which Mahomes could either prove himself as the future, or Brady could cement himself further as the GOAT of not only football, but perhaps all sports. Along with the QB matchup, there were also the other storylines including the possible back to back Super Bowl champions (Chiefs) and the “Brady winning without Belichick” narrative. Thus, it was only natural that fans and the media began to hype up this game to be a once in a lifetime game, because let’s face it, it was in theory. But then the game actually happened…

This quarter began with a couple of missed opportunities and it really looked like a normal, albeit boring game. Then, as I watched the game more closely, I began to notice a shift in Mahomes’s game. There were no more long shots taken, and it seemed that Tyreek Hill was being shut out completely due to double teams. Also, the Buccaneer’s defensive line started applying more and more pressure to Mahomes, especially due to the fact that most of the Chief’s offensive line was injured. As a result, the usually explosive Chiefs offense started to slow down and only scored a field goal by the end of the quarter. However, on the other end, Brady was learning the Bucs to decent drives and while he may not have scored on every one, he was able to score a touchdown in the final drive of the first quarter.

This quarter was when it all went wrong for the Chiefs. Even in the last quarter, I thought that adjustments could have been made, such as giving Hill shorter routes, rather than trying to run him deep on most pass plays, but nothing of the sort happened. The Chiefs were still being contained, and not a single big play happened. They again only scored a field goal by the end of this quarter and were starting to show more and more signs of slowing down. However, similar to the first quarter, the Bucs started to mesh even better, and Brady was able to lead the Bucs offense to two touchdowns in this quarter, putting them up by 15 at the end. However, the one key part I will point out in the Bucs’ success, was the Chiefs’ defense. They started to play worse and worse, giving up penalties left and right, showing a lack of discipline. They were definitely a major reason for why the Chiefs lost on Sunday.

Game Over. Nothing else to say. The Chiefs lost their motivation, and the Bucs reaped the rewards of their effort.

Be the first to comment on "Super Bowl LV"