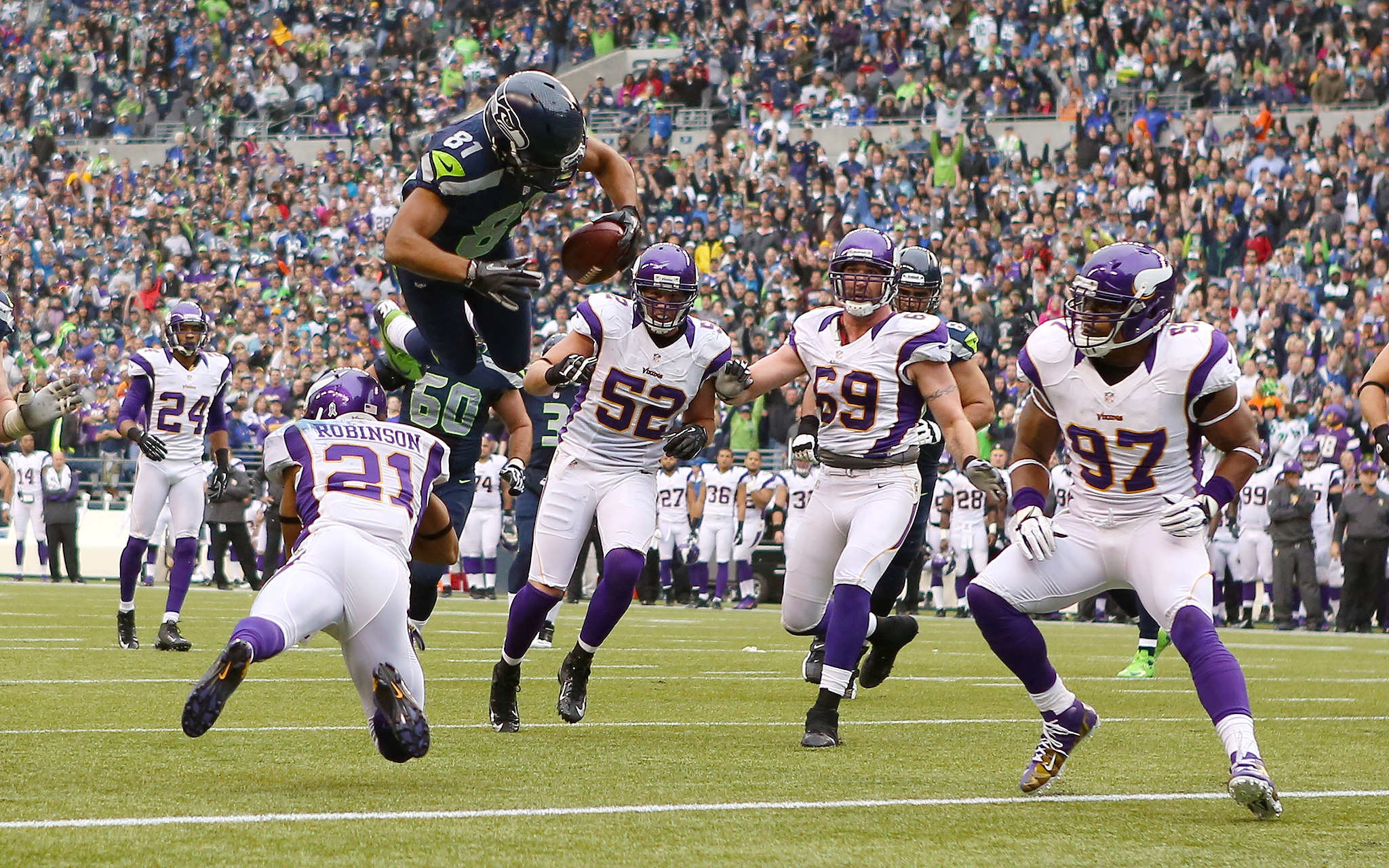 By: Agnel Philip and Mason Dearborn

The NFL season has been anything but disappointing thus far. There were plenty of nail-biting finishes as well as plenty of controversy. The best part? It can only get better from here. So stay tuned because this year’s playoffs have the potential to be one of the best ever.

After 9 weeks of the beautiful regular season down, we have one undefeated team and two un-winning teams. While it’s no surprise where those are ranked, the others may surprise you. While I can’t watch every game, NFL RedZone and the excessive amount of sports I study in my history class keep me caught up pretty well.

As always, remember these are just based on my opinion, although you should keep in mind that it is probably a lot more educated than yours. No, I am really just kidding. I guarantee several teams will beat teams that I have ranked higher than them this week and that I will look back next week and wonder how I could have ranked them as I did.

Although I can’t be sure if someone will ever read them, offering my own analysis on the NFL and maybe sharing some of my love for football is something I enjoy. I’ve missed writings these. Best of luck and good health to you and all your teams. – Mason (writes for even-ranked teams)

Some may question why a team that can have as ugly an offensive performance as they did last week against the Buffalo Bills is ranked number one on a power rankings list. Simply put, they haven’t found a way to lose yet. Sure they haven’t put up a lot of points. Sure, they haven’t played particularly strong teams. But in the end, the defense is carrying this team and it looks like a team perfectly built for the playoffs.

The Broncos’ offense has historically scored the most points through 8 weeks (week 9 bye), passing the Greatest Show on Turf and the 07 Patriots. You can tell your kids that you saw this! They don’t have the stifling D of the Chiefs, and they have shown they can lose, but Denver is a contender.

They’ve lost to Seattle and Indy, but that was in weeks 2 and 3. I argue the 49ers are better than the Seahawks because they have changed their whole style of game play since then. Interestingly, they are 1st in rushing yards (153 yards per game) and dead last in passing yards (189.9 yards per game).

The Seahawks haven’t changed since last year. They still win with defense. But Russell Wilson and Marshawn Lynch have been working their magic with some of their comeback wins this year. They are proving you can never count this team out.

When the best defensive player not named J.J. Watt, Aqib Talib, was able to be a part of a defensive effort that shut down Jimmy Graham, you knew the Patriots defense was the real deal.

One year after having one of the worst defenses in the history of the NFL, the Saints rank fifth in passing yards allowed. Only issue for this team is the running game which has let them down big time this year. This weakness showed last week against the New York Jets when the Saints only got 41 yards on the ground.

Sitting with the Bears and Packers atop the NFC North, all tied at 5-3 with a 2-1 conference record, the Lions are the last one remaining with their starting quarterback. They also have the best wide receiver in football, sorry Dez.

For once, the offense isn’t the issue for the Bears. The defense has proven to be exceptionally porous this year as they rank 23rd against the pass and 29th against the run. However, Marc Tressman’s new offense has been effective and the Bears have a legitimate shot at stealing the NFC North title.

With Aaron Rodgers, the Packers would have beaten the Bears. However, the Packers without Rodgers is still able to be ranked this high due to their running game. Who would have thought that we’d ever be saying that about the Packers?

Last year, this team couldn’t win the big games. But Andy Dalton and the defense have shown up on multiple occasions this year and the result is a team that has big wins over Green Bay and New England. However, the lapses still occur as this team has lost to both Cleveland and Miami.

This defense gives up just 13.3 points per game. Their five wins have been by a combined 105 points. They are definitely a threat to the 49ers and Patriots in the next two weeks.

Oh, the Cowboys, the team that hasn’t caught a lot of breaks this year. This team has played much better than its 5-4 record right now suggests. Two of its losses have come by one point each. They better get their act together because right now any team in the NFC East has a shot and the last thing this team wants is a win or go home game at the end of the year.

Overtime win over the Patriots, horrible loss to the Bengals (49 to 9), win over the Saints: what is the deal? I don’t know how confident I am in Geno Smith. He only completed 9 passes last week against the Saints.

I live in Arizona now so the Cardinals have suddenly become a much bigger deal. But if you talk to fans here, you would have no idea that this team is 4-4. According to Cardinals’ fans, this team may as well be 0-8. Here is all I know about this very up and down team: the defense is legit. And if Carson Palmer can have more performances like he did against Atlanta in Week 8, this team will finish at least 9-7.

The Browns have played very well, even with the three quarterbacks they have had start. They currently have Jason Campbell who led them to a close game against the top-ranked Chiefs and a win over the Ravens (0-13 against the Ravens before that game).

They pulled out a close win over a Cincinnati Bengals team that has been streaky at best this year. Their defense looks a lot better on the field than it does on paper. Their offense has had its moments. In the end, as one of my friends says, “new uniforms, new logo, same ol’ Dolphins.”

At 3-5, it is strange to say the Redskins are still a common pick to win the division. The defense is horrible, but they run the ball well and they found a way to beat the Chargers, which might be a better team.

They snapped a three game losing steak against the Rams last week on the shoulders and legs of Chris Johnson. So where does this team go from here? I don’t think they have enough to top the Colts in the division but with Jake Locker back and healthy, this team might just be able to squeak out a wild card berth.

Any team who can pass for 7 touchdowns in one game has to be the best, right?

They still have to play Cincinnati twice, New England, Chicago, and Detroit. They can’t even beat Pittsburgh or Cleveland; they could be last in their division a year after winning the Super Bowl.

This team is a lot better than people give it credit for as evidenced by wins over Carolina and Miami. However, it’s a case of same old same old in Buffalo. EJ Manuel is coming back so Bills fans should look for the season to start pointing up again.

With 3 wins against bad teams, the Rams are not having a good season. With Kellen Clemens at quarterback, the season is probably not going anywhere. However, they have played some close games and have shown they can run the ball well, with Zac Stacy tearing up the Seahawks’ and Titans’ defenses.

What can be said about a team that one year ago topped its division but has dropped its last six games and finds itself at 2-6? Why does this story sound familiar… oh, yeah, because the team right below them in the rankings has a very similar story…

First to worst at its finest. They are dead last in rushing yards (64.4 yards per game, no, really, I am not lying) as they released Michael Turner in the offseason. Steven Jackson is now back after several weeks of injury, but it is too late to save them. Two wins, one against Tampa (0-7) and the other against the Rams (3-6), is a huge disappointment to a team looking to send Tony Gonzalez out on a good note.

The G-Men are putting together a nice two game winning streak after starting out the year by losing six games in a row. Don’t look now but they are only two and half back of Dallas for the NFC East title. Despite the fact that they have given up 30 or more points on five different occasions this year, the defense has not given up chunks of yardage (16th against the pass and 9th against the run).

They gave up seven passing touchdowns to Nick Foles. Not much to say other than they are a bad team. Start your fantasy quarterback against them.

For the Steelers, Tom Brady and the New England offense picked a bad week to put on its best game of the year. This team has been bad this year. Like, really bad. Le’Veon Bell seems to have given them some spark in the running game but that doesn’t help the fact that other teams have been able to run all over them.

I have a special place in my heart for Adrian Peterson and I respect that he fights the good fight every week, but this team is way too heavy to carry. They will draft a quarterback next year.

After playing teams close the first two weeks, they have nose dived into an inexplicable mess. How can a team with as many great defensive pieces as this not win a single game halfway through the season? Next Mike Glennon has been serviceable as Josh Freeman’s replacement as quarterback but there isn’t a lot of hope for the rest of the season.

Second to last in rushing. Yeah, I just Googled a statistic to put with the Jaguars. Did you hear the story about the Jaguars fans rallying at 3:14 PM for the team to sign Tim Tebow? The only one with good luck on their team is Justin Blackmon who gets to go to rehab instead of play for them.

Be the first to comment on "Power Rankings Week"