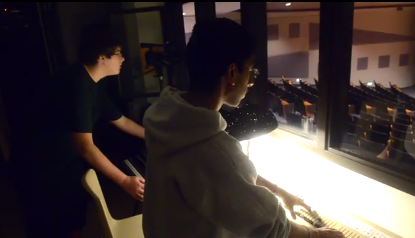 Above: ISP Seniors Ram Patel and Sai Somasundaram, as well as Junior Malachi Loviska, work tirelessly to run the sound booth at IMSA auditorium events, a service that increases in its utility purely because their work cannot be posted online without the heathen practice of metaphotography.

Disclaimer: Much like official IMSA Facebook photo albums, this article has not been published with the approval of IMSA Student Productions.

With the vision that the vibrant campus of the Illinois Mathematics and Science Academy could be captured through sound, video, and photography, then filtered and hidden, Ryan Eberhardt and his team formed IMSA Student Productions (ISP).

The organization’s purpose is two-fold: first, to ensure the destruction of the rule of thirds in photos posted online; and second, to impart to students the valuable life skill of doing work without sufficient credit. Above: Quite possibly the only image produced by IMSA Student Productions during the 2012-2013 Academic Year. The ubiquitous 960×640 pixel shot of campus’ Clash of the Halls can only be truly commemorated by being posted to Facebook and omitting an ISP Credit.

From time to time, ISP stores the occasional SD card or camera in the campus’ IMSA Media Services (IMS) Department. The key partner in ISP’s endeavors is IMSA’s Marketing and Communications Department (MarComm), which works alongside ISP every step of the way to impart inconclusive advice and frustrate the distribution process. Both MarComm and IMS agree that it is essential to ISP’s growth and the nature of IMSA’s community that any media produced by the team is swiftly, if not instantaneously, sequestered from students’ possession.

“In order to serve the tens of tens of people who populate the traffic of IMSA’s Facebook page, we must obscure the fact that students are allowed to handle cameras and edit video” says a MarComm member. “The legitimacy of the IMSA brand can only be furthered by isolating and posting photos of intentionally poor quality.” Over the past few months, IMSA Marketing has bolstered the efficacy of this process by retrieving said media in secret and appending forcefully awkward captions to each and every JPEG.

The effect on team moral has been tremendous. An ISP team manager says that he is capable of working on whatever projects need help, including photography, videography, photo editing, or studio recording. At the end of the day, he reflects that nothing satisfies him more than knowing that his hard work will be censored and discredited. Thrilled by suppression of IMSA creativity, an ISP videographer hopes to see the ISP website, which is currently burdened by the detrimental presence of more than nine months’ worth of residential, athletic, cultural, and academic photos and videos, crippled or even taken offline.

IMSA Marketing shares this pristine vision and, over the past few weeks, significant steps in the right direction have been made. An anonymous member of the Media Department is particularly excited to see the changes being made to ISP’s logo: “When I heard that Marketing wanted to add the IMSA stairs motif to the ISP logo, I was inspired. I could only have dreamed of a better way to adulterate the symbolism of the aperture and the purpose of IMSA Student Productions. Once we switch our website header to all capital letters and adopt the academy’s color scheme, we’ll really be on our way.” The anonymous source is confident that the Marketing Department’s preset style sheets, consisting of “Inquiry Blue,” “Imagination Yellow,” and “Sodexo Marinara Magenta” hues, will be exactly the keystone overhaul necessary to drive students, faculty, and alumni away from ISP’s online content.

Above: ISP Seniors Ram Patel and Sai Somasundaram, as well as Junior Malachi Loviska, work tirelessly to run the sound booth at IMSA auditorium events, a service that increases in its utility purely because their work cannot be posted online without the heathen practice of metaphotography.

With all these fascinating reforms, more can be done, especially in quelling the next group of skilled, creative, and passionate student members. A prospective ISP photographer embraced the teams’ training sessions: “More than video editing, one of the most helpful skills I picked up from Milosz and Ryan was utter silence.” The budding media artist remarked that he plans to hide his new extracurricular commitment from his wing mates, family, and teachers, lest IMSA Student Productions gain a presence on campus.

The prospective photographer’s views resonate with a member of IMSA staff, who believes “Student recognition could only tip off other faculty members to an opportunity to have their events and members celebrated and remembered by wider audience. Had I not known about their services for last year’s Cyber Security Panel, many dedicated alumni who serve our nation in the Department of Homeland Security would have only been seen by the 20-or-so students who were able to finish their homework and reschedule meetings to attend the event. I’m absolutely furious that this sort of diverse – and dare I say pioneering – content is allowed on the internet.”

Waking up from a good night’s rest of six REM cycles, an ISP member summed up the progress for us. “The significance of the aperture in our logo is to close the space through which light can pass. We’re here to limit the spread of artistic work around campus and to shut the door on students with promising talent in the fields of photography, videography, booth administration, and sound mixing.” Brushing a pile of SD cards containing media from the previous night’s Homecoming Pep Rally into the trash, he remarked: “We’re part of a new brand. Why let others see what our lives are really like when we can conceal them behind a few capital letters?”

Learn more about this dastardly organization online at: imsastudentproductions.com/about.php