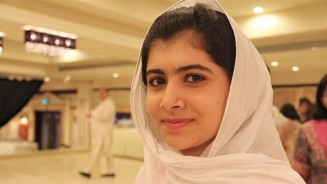 In 2009 at the age of 11, Malala Yousafzai, a strong advocate for women’s right to education, began documenting the struggles of getting an education in northwestern Pakistan while simultaneously hiding from Islamic extremists. With help from her father, who operated one of the few schools left open to girls in the Swat Valley, Malala resisted Taliban laws by secretly continuing to study even if that meant risking her life. She was sought after by the Taliban when her blog gained widespread attention and in October 2012, Malala was shot in the head while traveling on school bus in Islamabad, Pakistan. She was flown to Birmingham, England and has undergone multiple surgeries over the last twelve months.

In July, while still recovering, Malala addressed members of the United Nations and hundreds of children from around the world.

She said, “They thought the bullets would silence us, but they failed. And then, out of that silence, came thousands of voices.”

Malala has come back stronger, and her memoir “I Am Malala,” released October 8th, has once again thrust attention onto the deprecating view of women in Pakistan. The memoir encompasses the internal conflict she faces while fighting for her life every day and it is a testament of willpower, bravery and unconditional strength. She started the Malala Fund, which provides and supports education for women in Pakistan who are living in poverty. Her persistence even led to the ‘Stiff-Arm’ movement in which women wrote math and science equations on their hands in henna instead of traditional patterns.

Now 16 years old, Malala has met the Queen of England, has appeared on television talk shows, was nominated for a Nobel Peace Prize and most importantly, is an inspiration to teenage girls seeking an education despite being restricted. The only difference between her and the thousands of oppressed women in the Middle East is that she has no fear of publicizing the discrimination she faces every day despite having remarkable achievements. Malala has sparked a profound change and her power and passion lives within each of us.

Whatever the cause, the only thing you need is belief in yourself.

Why Some Are Against Going to College