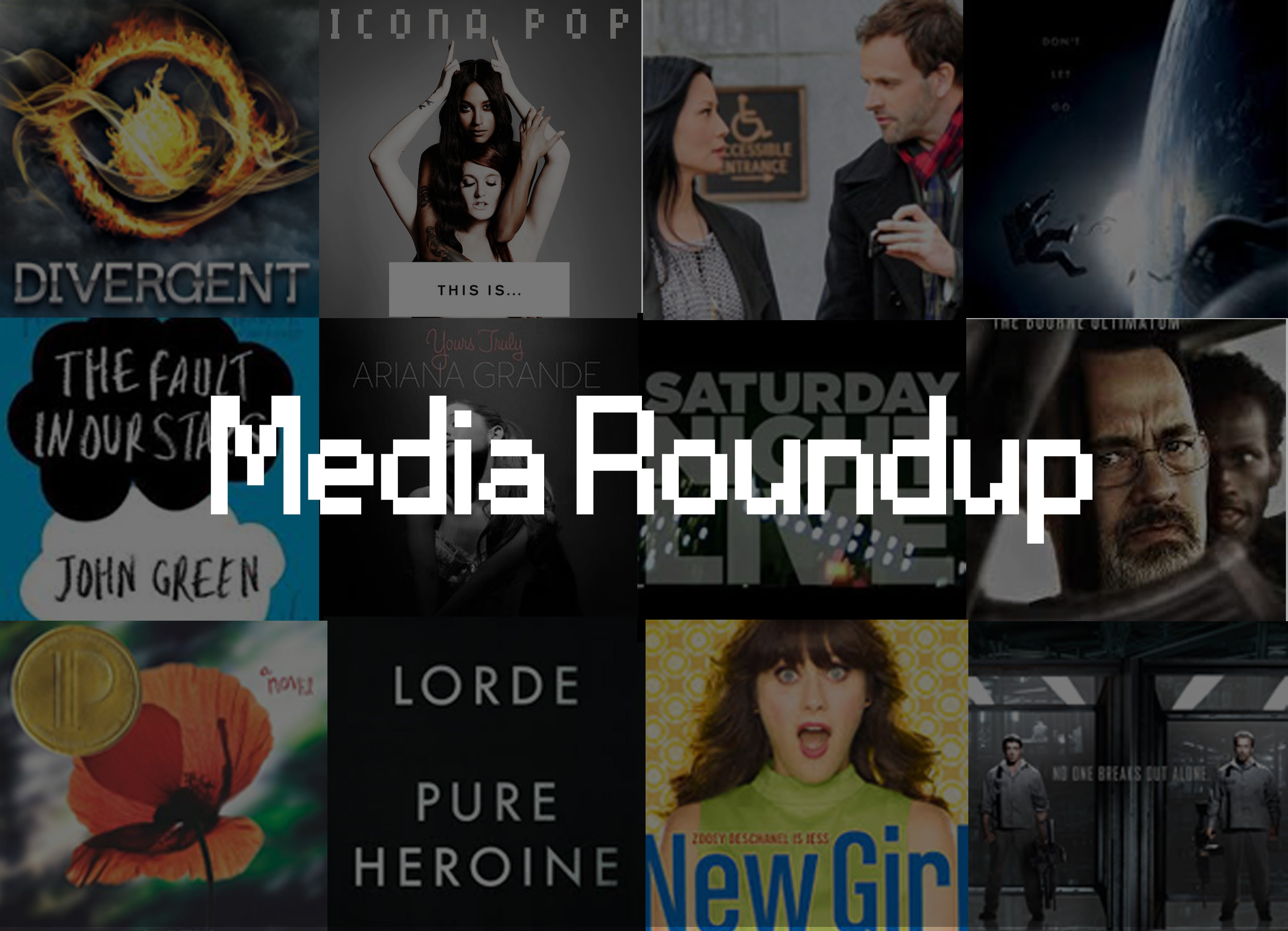 Presenting the Acronym’s first Media Roundup: an article that sums-up the three best movies, albums, TV shows, and books of the quarter. With no further ado, let’s get started!

With several book-based movies slated to hit the silver screen, it may be a good time to check out some of the bestsellers before you go to enjoy their film adaptations. Divergent is Chicago-based author Veronica Roth’s thrilling debut. Set in a dystopian version of the Windy City, Divergent packs a punch with its emotion, intense storyline, and strongly developed characters. For readers who enjoyed The Hunger Games, this novel may be a new favorite. Roth’s subsequent novel Insurgent has received similar praise, and her final novel in the trilogy, Allegiant, has recently been released as well.

The Fault in Our Stars by John Green

Look through our IRC’s fiction shelves, and you’ll find that the ‘Gre’ section is always looking a bit sparse. John Green’s captivating novels are almost always checked out, and The Fault in Our Stars is no exception. A raw, honest look into the lives of teens with cancers, his novel doesn’t detail action and violence, but it is quite the thoughtful read. The Fault in Our Stars puts a twist on classic themes of love and loss, combining the melancholy with the humorous.

Jellicoe Road is an enchanting read that chronicles the journey through adolescence quite well. Although the first two hundred pages are indeed confusing, there is a certain lulling quality and beauty to Melina Marchetta’s prose. It captures sentiment, pain, and hope without becoming too cheesy. It’s definitely a heavier read than both Divergent and The Fault in Our Stars, but if you are looking for something to make you think, Jellicoe Road is the novel to read. 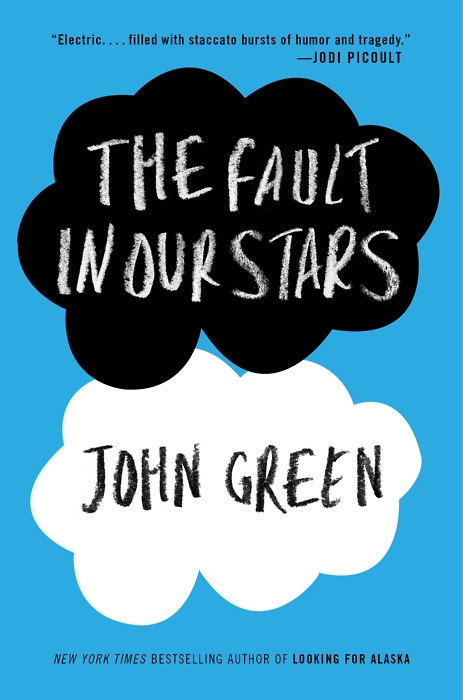 The cover of The Fault In Our Stars by John Green.

This is… Icona Pop by Icona Pop

This is… Icona Pop can be summed up perfectly in one word: carefree. This debut international album by the Swedish duo Icona Pop is full of songs that are light-hearted and ridiculously fun to dance to. The most well-known single on this album is undoubtedly “I Love It”, featuring Charlie XCX as a songwriter and peaking at number seven on the U.S. Billboard Hot 100 chart. My personal favorites on the album, however, are “Girlfriend” and “Then We Kiss”.

Yours Truly by Ariana Grande

Nostalgic of the R&B music of the 90’s, Yours Truly includes the hits “The Way”, which peaked at number nine on the U.S. Billboard Hot 100 chart, “Baby I”, and my particular favorite, “Honeymoon Avenue”. Ariana Grande marks her debut album as her own by incorporating pop, soul, and R&B to produce a distinctive track. The album is defined by her impressively strong vocal abilities and relatable lyrics. With much anticipation for Ariana’s first album, Yours Truly was the key to showing off that she is not only an actress, but an incredible vocalist as well.

Topping the Billboard Hot 100 with her lead single Royals, 16-year-old Lorde from New Zealand proves to be much more than her contending bubble-gum pop acts with her debut album, Pure Heroine. With a mixture of indie pop and minimal music, each song is armed with an addictive pulse of beats and airy, yet compelling tunes. Lyric-wise, Lorde exemplifies teen angst and scorns society’s glamorizing of youth. “Ribs”, in particular, has been on repeat as it describes the bitterness and confusion of growing up that easily narrates my thoughts.

The cover of Grande’s new album.

Although SNL has been airing since 1975, each new season brings fresh cast members, a larger collection of sketches, new impressions, and all the more laughs. The departure of four cast members at the end of last season paved the way for six new cast members in season 39. The season has been off to a humorous start, with the first four episodes featuring Tina Fey, Miley Cyrus, Bruce Willis, and Edward Norton. The show has played spoofs on nearly everything, from “E-meth”, “24-hour Energy for Men Dating Actresses”, and HBO’s “Girls” to parodies of NASA and Obama Care. With its ridiculous skits and side-splitting humor, this season has not failed to make fans laugh!

Season 2 of CBS’ Elementary brings back the same dynamic duo of Watson and Holmes that audience everywhere have come to love, except better. So far, six episodes in, this season has been full of the same amazing cases and wonderful acting by Jonny Lee Miller and Lucy Liu that made Season 1 so appealing, though there is definitely character development to be seen. Fans of Joan can get excited by how much she’s improved as a detective since Season  1, and everyone will undoubtedly be touched by Sherlock’s more tender side. The writers have promised a reprise by Natalie Dormer in her role from Season 1, as well as a more in-depth look into Captain Gregson’s life, so there’s plenty to look forward to for new and returning fans alike.

Season 3 of Fox’s New Girl follows the new romantic connection between roommates, Nick Miller and Jess Day. Nick’s best friend, Schmidt, plots to ruin their relationship after his failed attempt at juggling his own love dilemma. On the other hand, Winston is indifferent toward his roommates’ situations as he preoccupies himself with his ex-girlfriend’s cat, Ferguson. Don’t miss this season as it continues to bring laughs with the same quirky Jess, her lovely roommates, and the return of past roommate, Coach, but with a fresh touch of maturity. Released on October 4th, this movie has been topping the box office for 3 weeks. The story is centered around the space flight of Dr. Ryan Stone (Sandra Bullock), a bio-medical engineer, and the experienced astronaut Matt Kowalski (George Clooney). The film tells the story of these two stuck in outer space. Reminiscent of the film Apollo 13, Gravity recounts the strategies of the two space travelers to get back to safety. Only 90 minutes long, the plot is straightforward and easy to follow, with no time for side-stories. Perhaps the most outstanding component of the movie is the cinematic effects used to capture the image of outer space. The last film renowned for its visual effects, Life of Pi, relied mostly on the use of CGI effects, rather than cinematography. Gravity, however, uses cinematographic lighting concurrently with CGI effects to showcase the endless abyss of outer space. Rather short, the drama absorbs the reader completely during its 90 minutes. With breathless scenes and wonderful performances by veterans Bullock and Clooney, the film will undoubtedly leave you breathless, and not just because of the lack of oxygen in outer space.

Tom Hanks’ newest release, Captain Phillips tells the story of the 2009 Somali pirate hijacking of a U.S. container ship. Hanks plays Captain Richard Phillips of the ship Maersk Alabama. A villager looking for goods to please the warlord Garaad, Muse (Barkhad Abdi), takes Phillips hostage. From that point onwards, the film focuses on the relationship between Muse and Phillips, juxtaposing the life of a man coming from an impoverished country, resorting to piracy to gain the favor of a malicious warlord, with one of a man from the West. A psychological thriller, the film delves into the mind of these two men. The film relies a lot on character and plot, without the use of special effects. Well-created tension throughout the movie, keeping the audience on the edge of their seats.

Escape Plan tells of a man named Ray Breslin (Sylvester Stallone) and his attempts to escape from a prison he designed. Breslin creates the finest security prisons in the world, and usually tests them by becoming an inmate himself. A mysterious woman persuades Breslin to come to his new prison in order to test it out. Upon his arrival, it becomes apparent that Breslin has been tricked into coming to the prison by some unknown adversary. Working with him is another prisoner, Rottmayer (Arnold Schwarzenegger). This film’s entertainment comes mostly from the chemistry between Stallone and Schwarzenegger, as well as the excitement and detailed planning of the two’s escape. Keeping a fast pace throughout, no time is allotted for the audience to escape from this movie.

Be the first to comment on "Media Roundup: Quarter 1"