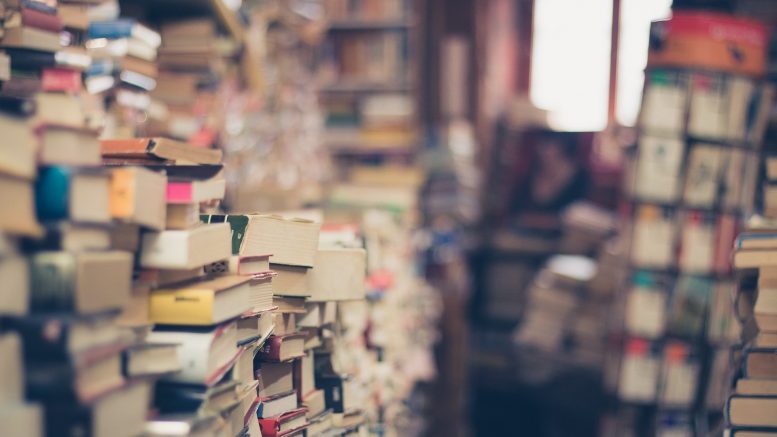 School has just resumed in person, so hopefully, you’re not looking to escape just yet! Nonetheless, a bit of escapism never hurt, and fantasy is a great way to get away. So, here’s a list of more-or-less fantastical books, in no particular order—they’re all great.

The Priory of the Orange Tree by Samantha Shannon

A standalone epic fantasy retelling of the legend of St. George and the Dragon. East and west are divided in a world shadowed by the threat of a thousand-year-old prophecy. In the Queendom of Inys, mysterious assassins target the heirless Queen Sabran the Ninth, keen on ending the last member of the House of Berethnet. Lady-in-waiting Ead Duryan, meanwhile, is a pagan southerner in Sabran’s court, tasked with using her illicit magic to keep the queen safe. Far away, across the deep, dark, terribly ominous Abyss, Tané has trained nearly all her life to become one of Seikii’s revered elite: a dragon-rider. Now she must prove her skill in a series of tests. But then, under cover of night and mist, a wraith of a man washes up from the sea, and Tané is confronted with a decision… This book is a most delightful bonbon of religious tension, sapphic romance, court scheming, and dragons(!).

A retelling of some of the mythology surrounding Circe, sorceress of Greek myth, from her own point of view. Circe is one of Helios’ many daughters, a nymph blessed with immortality. Yet, she has always felt a detachment from her kind: she is fascinated by humans, with their short lives and frail, fragile bodies. In her desperation to bridge the gap between herself and the humans, she makes a discovery: witchcraft, which is more powerful than the gods themselves. Posing a threat such as this, Circe is banished to the island of Aiaia to live a life of isolation, permitted visitors but never to leave. On Aiaia she devotes herself to her craft. Her skill draws the attention of her sister, the mother of the Minotaur; the great craftsman Daedalus; her niece Medea; and Odysseus of many devices. This standalone is quiet and poetic, spanning many myths and millennia—not a fast-paced read, but a satisfying one.

The City of Brass by S.A. Chakraborty

Another fantasy trilogy, this beginning in 18th century Cairo. Nahri is a con woman without origin who sees superstition and myth as little more than handy tools for cheating Ottoman nobles. She is midway through a zar one day when she decides to follow a whim and chant in the mysterious tongue she has always known but for whatever reason never been able to identify. When she is walking home, however, she wonders if perhaps this might have been a silly idea: a sandstorm strikes out of nowhere, and when it is through, a prickly Djinn warrior has appeared to whisk her away—across deserts and mountains, past demons and myths, to the Djinn City of Brass, glittering Daevabad. In Daevabad itself, meanwhile, Prince Alizayd al-Qahtani cares too much for his own good. Stealth can only get him so far; the smallest of missteps would see to his being disowned. But tensions in the blood purity-obsessed city are rising, and the tribes of Djinn are at each other’s necks… Ali must make decisions, and Nahri too. This intricate series is packed with politics and mythology and hidden pasts; what an explosion it is when it all finally erupts.

The Poppy War by R.F. Kuang

A fantasy trilogy based on the events of the Sino-Japanese War. Rin is a peasant girl in a poor southern province of Nikan. Her one hope of escaping arranged marriage is acing the Keju, an Empire-wide test that determines one’s placement within Nikan’s academies. She is ecstatic when she earns a spot at the legendary Sinegard. Off she goes from her tiny town to the Empire’s unforgiving capital, where she dedicates herself to her studies. But with the end of her first year comes a test, to see if she is true Sinegard material, worthy of continuing on. Passing brings with it a discovery, which leads to an apprenticeship to Sinegard’s most enigmatic of Masters, who holds the secret to—and salvation from—a power perhaps best left untouched. A whirlwind of a series, where it picks up is not at all where it leaves off. Start is linked to finish by a rickety bridge of shamanism, fire, and violence, suspended over a chasm of evil…

The House in the Cerulean Sea by TJ Klune

A funny, feel-good standalone with a touch of magic. Linus Baker is a caseworker for the Department in Charge of Magical Youth. He follows rules and routine to a T, his dreary days in the gray city brightened only by evening appointments with his record player and his cat, Calliope. But then, Linus is summoned by the fearsome and mysterious Extremely Upper Management, to be given a top-secret assignment: he is to venture past the comfort of the city limits! Whereupon he must travel to an orphanage on a distant island to determine whether the six children who live there are, in fact, so terribly threatening and maniacal and evil that they might “bring about the end of days.” Linus, with great hesitation, crosses many a train track to reach the faraway island, where he is greeted by a series of enigmas—most notably, Arthur Parnassus, the master of the orphanage. As he begins his notetaking and diligent report-writing, Linus finds himself pleasantly surprised by what he finds. This poses Linus with a predicament: he is forced to decide whether to let his new companions rope him into their family or to remain the impartial observer Extremely Upper Management expects. This is a quick but worthwhile read about changing beliefs and the deceptions of expectation, with a wholesome bit of found family and romance.

A sci-fi trilogy (to-be). Victor Vale and his college roommate, Eli, are on the pre-med track at their college. Eli gets a little too involved with his senior thesis and goes on a quest to obtain empirical evidence, the missing puzzle piece to all of his research, and Victor, being the supportive roommate that he is, decides to humor Eli and help him out. Eli has come to the highly scientific conjecture that the right circumstances could lead one to develop superhuman abilities, so they go about setting everything up, double-checking their work, until they’re satisfied with what they have and are ready to take a risk. From there, you could say things soon take a turn for the ExtraOrdinary… The first two books of this series are fast-paced and suspenseful, with dual timelines and multiple points of view that eventually coalesce in a dramatic, high-stakes finale.

The Picture of Dorian Gray by Oscar Wilde

A Faustian standalone novel. Lord Henry Wotton is a man of science, and nothing is more fascinating to him than “one’s own soul, and the passions of one’s friends.” So he embarks upon a quest to conduct an analysis of these things, trusting in the “experimental method” to reveal to him what he wants to know. He is talking with his painter friend Basil one day about a young man who has inspired Basil most terribly when said young man happens in. And how timely his arrival is, because now Lord Henry’s found himself the perfect subject for study. Lord Henry then makes the acquaintance of this stranger, the innocent, boyish Dorian Gray, and soon becomes one of his closest friends. But friendship cannot exist with influence, and Lord Henry might not be the best of them. Meanwhile, Dorian displays in his house the titular picture of Dorian Gray, courtesy of Basil. As he becomes more and more vain, obsessed with youth and beauty, Lord Henry’s voice in his ear all the while, something about it begins to change… This is an evil, luxurious story about vice and corruption, set against the backdrop of Victorian London.

Underrated Books That Will Make You Feel Awesome

Be the first to comment on "Fall Book Recommendations"