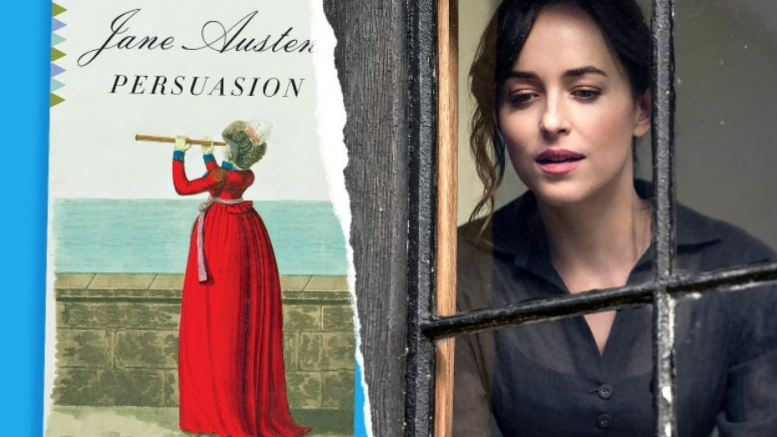 As any avid Jane Austen fan knows, Netflix released Persuasion on July 15, 2022, 205 years after her book was published in 1817. With a gap of over two centuries separating the two tellings in the nature of the world and their audiences, the 2022 variation contained many deviations from the original story. But, even with these inconsistencies, the heart of the story was preserved to be loved by a new modern audience.

Persuasion tells the tale of Anne Elliot, the middle daughter of the baronet Sir Walter Elliot. Her father is an extravagant narcissist obsessed with his social status (much like his favorite daughter, and Elliot’s eldest sister Elizabeth). Her youngest sister, Mary, is married and very high-strung.

Anne herself is always overlooked and forgotten by her family. She was once engaged to a man by the name of Frederick Wentworth but was persuaded to give up their attachment as he was not rich or high enough in status to satisfy the desires of her family. Because she was young, she consented, resulting in misery in both parties.

Roughly eight years later, they are brought together again and he is in possession of a much larger fortune due to his work in the Navy, having eventually risen to the rank of Captain. As Anne and Wentworth struggle to figure out their respective feelings for each other after a long, painful separation, other characters come into play, threatening to derail any possibility of those two reuniting. Miscommunications about the status of each other’s relationships occur on numerous occasions. At one point, it looks as though Wentworth is engaged to Anne’s cousin Louisa, and at another it seems as though Anne will be engaged to her cousin Mr. Elliot. But, eventually, all is cleared up and the couple reunites, happier than they have been in many years.

Contrasts Between Book and Film

The largest disparity between book and film was the modernization of the film. Though the characters were dressed in time-appropriate clothing, their speech didn’t reflect the time. Anne was found to say things such as, “Because he’s a ten. I never trust a ten.” Or, on another account, she says “Now we’re strangers. Worse than strangers. We’re exes.” In the book, however, this quote was wrriten as “Now they were as strangers; nay, worse than strangers, for they could never become acquainted. It was a perpetual estrangement.” The incluson of terms like “ten” and “exes” and remove of “nay” all points towards a modernization of the film that failed to preserve the linguistic traditions of the 1800s.

Anne’s character is also very different in the variation. The movie is told in the first person through Anne’s narration, full of sarcasm, winks, and eye-rolls. In the book, however, the story is told in the third person and Anne is more controlled, not full of sarcastic humor.

Another very notable difference was the exclusion of Anne’s friend Mrs. Smith in the movie. Anne visits her friend quite often in the second volume of the book, and she provides great insight into the character of Mr. Elliot, a man who is ready to ask for Anne’s hand in marriage at one point of the story. In the movie, Mrs. Smith is never mentioned and Mr. Elliot’s disposition must be sought out in other ways.

Additionally, the ending of both mediums contrast greatly. The movie ends in a passionate kiss, the wedding of Mr. Elliot and Mrs. Clay (a friend of Elizabeth Elliot, Anne’s sister), and a scene of Wentworth and Anne by the coast, happy as can be. The book ends with Anne and Wentworth walking through town, discussing everything that had occurred and how they now, and have always, felt.

However, some things did remain the same. Mr. Elliot and Mrs. Clay do not get married, although they do move to London together, and it is hinted that they might one day do so. Anne’s family and family friend finally approve of Wentworth and Anne’s attachment, Mrs. Smith is taken great care of by Anne and her new husband, and Anne and her Captain are as happy as they could possibly imagine.

These are just some of the many modifications that occurred in the newest rendition of the classic. As a bookworm and major Jane Austen fan, I wanted to love the movie — and I did, but I also noticed all the vivid differences from the original material, making my viewing experience a tad unpleasant.

All in all, I do recommend this movie because I believe it still honors the story of Anne Elliot and Captain Wentworth, but I also recommend that viewers either take the time to read the book or at least acknowledge that this is not the story in its true glory. From the linguistic discrepancies to the reimagined character of Anne to the modernized ending, the movie takes a new shift that some readers appreciate, while others loathe. For me, at least, the book will always be better than the movie.

Regardless of what it includes or excludes, the movie is successful in introducing a whole host of people to the intricacies of Jane Austen and her works.

Film Review: The Perks of Being a Wallflower

Be the first to comment on "Netflix’s Persuasion: In Review"