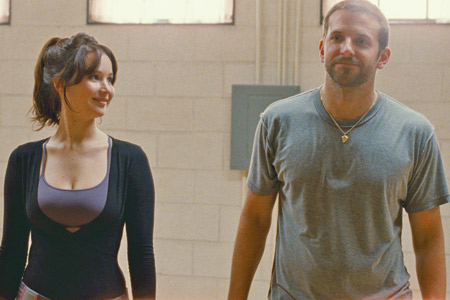 Summary: Patrick Solitano (Cooper) is a middle-aged man recently released from a mental hospital in Baltimore. This film follows his journey as he tries to live with an odd family, his absent wife, and the constantly looming threat of his own mood swings. Throughout the mess that is his life, and the surprising new friend he manages to make (Lawrence), he struggles to develop a more optimistic and generous nature in hopes that one day, his wife will return to him.

Review: Silver Linings Playbook is a movie that is truly indefinable. While some may be inclined to  label it as a romantic comedy, that genre certainly doesn’t encompass all the topics that this film touches upon. There are, of course, both witty one-liners  and passionate relationships in the movie, but the true focus of the movie is on mental illness, mending relationships, and, at its core, the willingness to keep moving on when it seems that the world is falling apart.

Cooper and Lawrence both play characters with mental disorders that affect their ability to behave in a ‘socially acceptable’ manner. Both the actors clearly portray the difficulties that come with living with such a mind, and they both magnificently expressed the often violent mood swings that are characteristic of conditions like bipolar affective disorder and obsessive compulsive disorder. And yet, Cooper’s character also comes across as very hopeful and optimistic, somehow balancing, in a believable manner, traits not generally found in a single person.

To add to this, the cinematography of this piece is spectacular. Just the angle and movement of the camera underscores the tone of the scene and the expressions on the characters’ faces. However, the movie is a little jumpy at times, and some transitions were very unclear. The story is a little difficult to understand at the beginning, but it is easily pieced together as the movie goes on. Some people might find that the level of exposure to the mental disease that the movie offers is awkward or stilted, as in Cooper and Lawrence’s initial meetings, but it is a true representation of a mentally ill person’s approach to social situations.

In short, this film exceeds the bounds of its genre. It is relatable, poignant, and touching in a way that isn’t expected from a typical romantic comedy.  A truly a feel-good film.

Oscar Buzz: The film itself is a contender for Best Picture (competing against the likes of Argo, Lincoln, Life of Pi, and Les Miserables). Jennifer Lawrence is also a favorite for Best Actress, while Robert De Niro, who plays Cooper’s crazy father, is a predicted nominee for Best Supporting Actor, though he is up against tough competition, including Leonardo Di Caprio (Django Unchained), Tommy Lee Jones (Lincoln), and Alan Arkin (Argo).

Be the first to comment on "Film Review: Silver Linings Playbook"