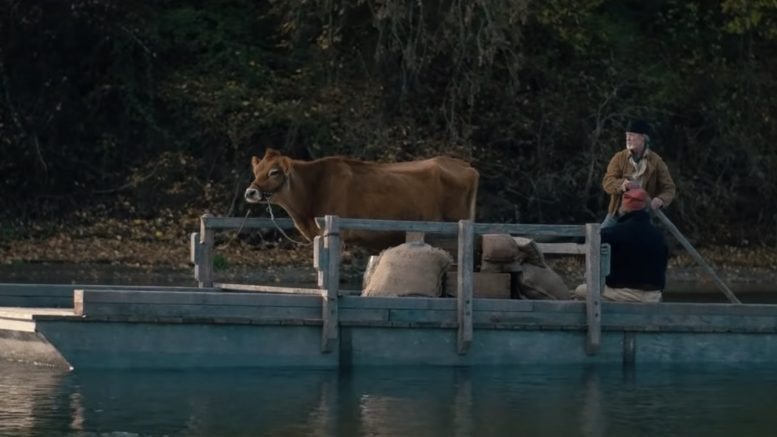 In the soil lies two skeletons positioned right next to each other. Suddenly, their protective layer of dirt is meticulously unearthed. A shovel appears, and soon after a girl. The skeletons have been buried for over a century. First Cow, directed by Kelly Reichardt, focuses on the story of these stark bones. Taking place in the frontier era in the 1820s Northwest, First Cow appears to be a symbolic representation of American entrepreneurship. While some messages are useful, the unrealistic nature of First Cow and lifeless camerawork impede its message.

Otis Figowitz (John Magaro), known as “Cookie,” is a cook traveling with Russian furriers. King Lu (Orion Lee) is running from these furriers after he killed one of their members. One night Cookie hears noises in the bushes and sees the naked Lu. Cookie provides clothes, food, and warmth for Lu. The next day, Lu leaves Cookie, as Lu is avoiding the furriers. First Cow follows the story of the friendship between Cookie and Lu, who later reunite at a bar and attempt to strike it rich by stealing milk from a cow.

The movie is intriguing, even though the plot is simple. However, the narrative Reichardt is promoting is partially flawed. With Cookie and Lu being poor and battling against the unfair capitalism of the time, Reichardt is correct by supporting equal opportunity for the oppressed in the 1820s; she emphasizes the dichotomy between their lives and the life of Factor. However, Reichardt fails when she suggests contemporary American capitalism is analogous to the inequities of the 1820s. “History isn’t here yet, but it’s coming,” Lu says. “Maybe this time we will be ready for it.” Reichardt pushes the narrative that the systems in place today are just as unfair as they were back then, which is frankly incorrect and shatters the hope of individuals looking to “strike it rich” in today’s world.

Throughout First Cow, lackluster cinematography bores the viewer.  Reichardt includes numerous scenes that are drawn-out and tedious, taking the viewer out of the emotional moment. After Cookie and Lu reunite at the bar and stay at their shack, Reichardt devotes considerable time to the same scene: Lu chopping wood and Cookie tidying up the shack. Lu and Cookie each perform the same action for the duration of 30 seconds.  Proper camerawork can create action in these instances, but Reichardt’s decision to solely film from one angle is the predominant pitfall. Scenes such as these sprinkled throughout First Cow ultimately tire the viewer. Movies should transmit engaging energy, instead of the viewer quickly losing this energy with the dull scenes in First Cow.

While the viewer grows exhausted, further compositional errors hinder proper character development. As soon as Cookie and Lu meet, they stare at each other for several seconds. Neither of them says anything or communicates using body language. While their silence could have been a compelling action during their first encounter, Reichardt’s repeated use of this silence causes every instance of this pattern to be meaningless. At two-hours plus, First Cow incorporates recurring blank stares which could have instead been used to further the character development of Cookie and Lu.

First Cow begins with a quote from the English poet David Blake: “A bird a nest, a spider a web, man friendship.” To me, this quote means the forces from friendship conglomerate to produce a human’s home. The places we belong are not determined by the physical world. Rather, content friendships constitute our homes. Though First Cow fails in several areas, Reichardt echoing this message throughout First Cow is the greatest accomplishment of the movie.

Film Review: From Up on Poppy Hill

Be the first to comment on "First Cow Review"