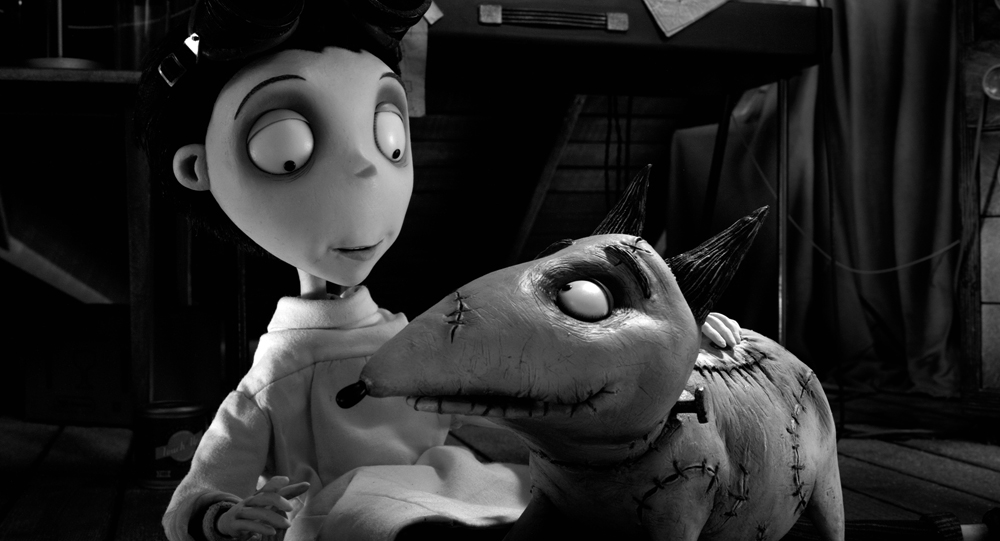 Summary: After Victor Frankenstein’s dog, Sparky, is hit by a car, Victor brings Sparky back to life with the power of electricity. Sparky’s reanimation “sparks” a variety of heated reactions in Victor’s suburban, science-phobic hometown of New Holland, ranging from joy to jealousy to total terror. In addition to Victor and his loyal canine, the film features Victor’s varied and arguably insane classmates, equally extreme teachers, melancholy neighbor, and surprisingly normal parents.

Some History: Frankenweenie isn’t really a new film. Actually, it’s almost thirty years old. Early in his career, Burton made Frankenweenie as a 29-minute short to accompany the 1984 theatrical re-release of Pinocchio. It never made the silver screen, however, as Disney claimed that Burton had wasted company resources on a product “too scary” for children, fired him, and shelved the project.

Although Burton claims the year after being fired from Disney was one of the worst in his life, it worked out in the end. Burton is now one of the most well-known living filmmakers, with several film staples to his name, including Batman (1989), Edward Scissorhands (1990), and The Nightmare Before Christmas (1994), as well as Alice In Wonderland (2009), the only Burton film to break the billion dollar mark in the box office. Burton makes some adjustments on the set of Frankenweenie.

Review: Frankenweenie marks a return to what makes Burton such a beloved filmmaker: his original characters, in their first film appearance since 2005’s Corpse Bride. And while it stands on its own, Burton fans will love the numerous references to Burton filmography, including Mars Attacks! (a poster in Victor’s room), Batman (a bat-shaped kite), Corpse Bride (The mayor is a Finis Everglott look-alike), and even Burton’s book of poems, The Melancholy Death of Oyster Boy & Other Stories (Staring Girl comes to life as a creepy classmate).

How to Succeed at IMSA

Be the first to comment on "Film Review: Frankenweenie"