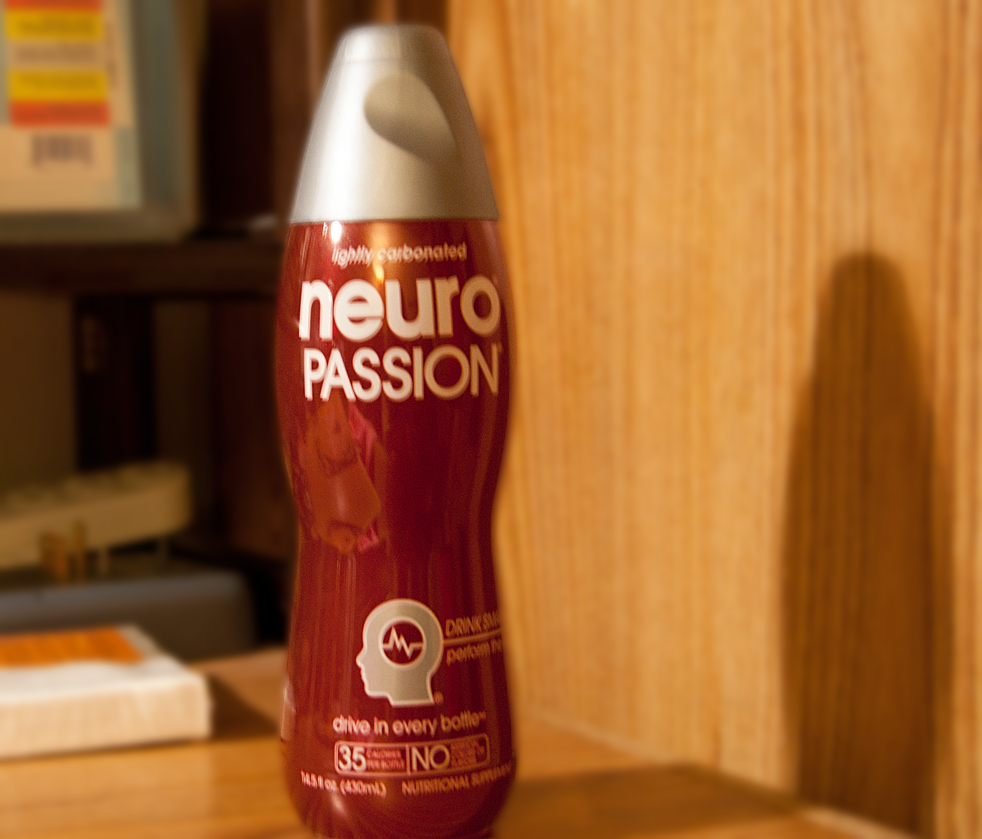 We IMSA students already resemble college students in a range of ways. We can already relate to most “College Problems,” are intimately familiar with the feelings of sleep deprivation and academic frustration, and tend to be fans of legally drugged beverages. That last category includes, of course, the highly caffeinated Mountain Dew and various varieties of coffee. However, based on its slowly growing number of consumers from IMSA, perhaps the line of Neuro Drinks should be considered a success on campus as well.

In a nutshell, the Neuro Drinks are a series of artificially flavored beverages that contain a cocktail of caffeine and vitamins alleged to give consumers increased focus, passion, or energy, depending on the specific drink. Yes, they are completely legal to consume–but, unfortunately, they are also rather expensive.

Below I will explain my own experiences with Neuro Bliss, Neuro Sonic, and Neuro Passion.

Supposed to: Keep you calm and make you happy

Taste: Unique, interesting, unexpected–but not terribly delicious. The closest comparison I can come to is that of Milkis on the harsh, more carbonated side, with the slightest taste of something that resembles citrus. Bliss is not the most palatable drink on the market, but it is certainly not disgusting, and very possible to drink without choking on the taste.

Effect: I drank Neuro Bliss while trying to tackle a mountain of homework. About an hour and a half later, I felt my stress levels were lowering. Additionally, when arguing with a friend, I found that my arguments were mostly-half-hearted, because I wasn’t getting angry. For that brief period, I was simply incapable of feeling stressed or having a hot temper.

Overall comments: I found this drink is too effective. I was looking to feel calm, blissful and still efficient; instead I looked at my workload indifferently and did almost no work while “high” on Neuro Bliss. Rather than feel “bliss”fully happy during the high, I felt a profound sense of indifference I could not surmount.

Friends have told me that this drink is best for severe emotional lows (post-breakup, etc.). As I, however, did not benefit from consuming it, I would not strongly recommend it unless you are suffering from absurdly high levels of stress.

Supposed to: Raise your stamina, and “increase drive to pursue what you love.” Originally called Neuro Gasm.

Effect: Within an hour of consumption, the efficiency with which I was tackling my workload astounded me, especially considering Passion is not advertised as a drink that helps with focus. It was actually difficult to stop working and start procrastinating. In addition to efficient, I felt alert and much more awake.

Overall comments: Neuro Passion does an excellent job of doing what it does not claim to do: increase focus.

Supposed to: Increase your concentration and ability to focus

Taste: Imagine a mix of severely carbonated pomegranate juice, mixed with the taste of medicine, and you have a vague idea of what this tastes like. I found it less palatable than both Neuro Bliss and Neuro Passion.

Effect: It did increase my ability to focus, but only marginally. The effects of the drink also lasted for a shorter period of time.

Overall comments: It is entirely possible that, Neuro Sonic is excellent at what it says it will do, and that my prior experience with Passion had raised my expectations too high. However, if, in the future, I come to rely on one of the Neuro Drinks to help me focus, I will turn to Passion long before I resort to Sonic.

Have you tried any of the Neuro Drinks? What was your experience like? Sound off in the comments below!

Be the first to comment on "Neuro Drinks: A Review"