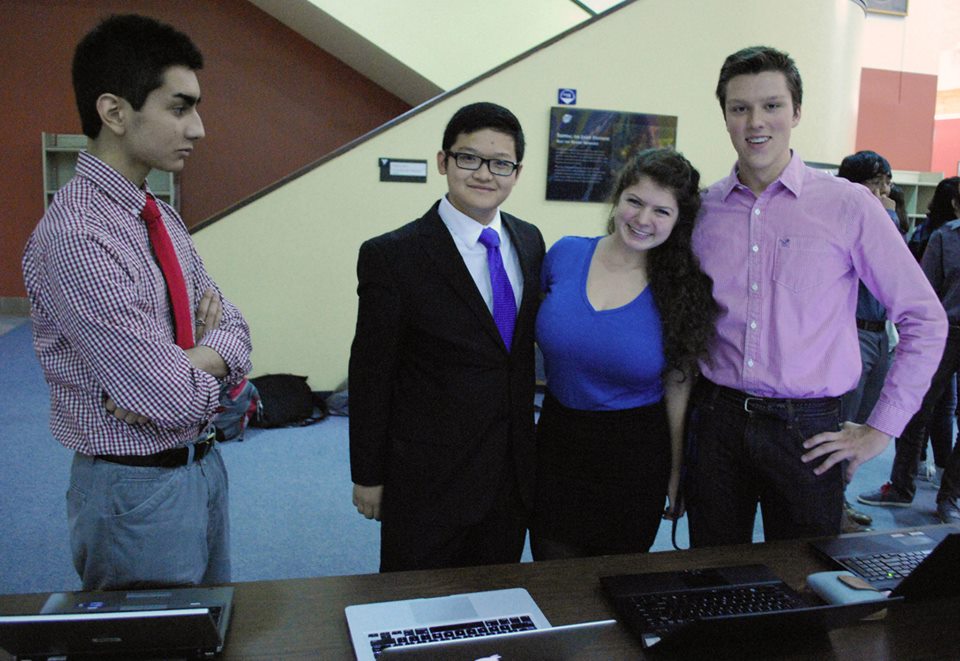 In a traditional “welcome back” to school, IMSA hosted its Homecoming throughout the past week.  Classes competed against one another in various events both during the school day and in the evening. Events ranged from Jeopardy to Singled Out, a game show in which students could compete to win a date to the Homecoming dance. In addition, each day hosted a different dress up theme and each class earned points according to how much participation they had. The week culminated in a Pep Rally on Thursday, when students flooded into the gym sporting their class t-shirts or colors to cheer their class on as representatives from each competed in an obstacle course, eating contest, tug of war, and drill team. The atmosphere was charged with excitement and (excruciatingly) spirited cheers. By the level of enthusiasm exhibited for Homecoming Week, one can hardly imagine the energy during Clash in April. At the end of the night, the class of 2014 celebrated a customary Homecoming victory while the sophomores pulled a shocking second place upset over the junior class. Seniors turn the U-Bench into a spirited and comfortable den.

On Thursday, the seniors also executed their Senior Prank: a tradition where seniors wake up in the early morning and dress campus in decorations extolling their class. Toilet paper was strewn everywhere (including on the iconic hamster ball), taunts such as “#nostudyhours” and “#noethics” were scrawled on the sidewalks, and the Senior U-Bench was turned into an enormous bed. Hopefully, the mess they made was worth the hassle of having to clean everything back up.

On Friday, IMSA invited Dr. Jim Wand, an esteemed hypnotist, for his 20th year performing here. As one of the most highly-anticipated events of the year, students eagerly packed the auditorium, hoping to see their friends embarrass themselves or perhaps curious to see if they could be hypnotized. After introducing the science and effects of hypnosis, thirty students were hand-picked by Wand to go up on stage. And once they were put into a hypnotic state, they were under Wand’s control. He had them bet on a horse race. He had them dance. He had them make balloon inventions to the delight of the crowd. At the end of the show, the hypnotized zombie-walked back to their seats and were snapped back into consciousness.

After Wand’s show last year, a “hypnotism culture” (as student Taylor Herr (’14) puts it) arose in the IMSA community. Students frequently attempted to hypnotize their friends for the enjoyment of seeing them act ridiculously or, in some cases, to let them catch up on many hours of lost sleep. And after the events of this year, one can expect to see this phenomenon once again.

If you missed the show (or any other Homecoming event), don’t fret! IMSA Student Productions covered the performance and will promptly have it up on www.imsastudentproductions.com.

Finally, fancily dressed and groomed, students grouped with their friends for dinner before coming back to campus for the Homecoming dance. Stars, classic 15th century literature, masks and romantically dim lights accented the Masquerade Ball theme as students ironically danced to modern pop. For some students, it was just a fun dance: a chance to hang out with friends. But for others, it sowed the seeds of love.

Homecoming provides fantastic opportunities for class bonding. Each class has a different perspective of the event. Sophomores are getting to know each other and this is their first time truly uniting as a class. Juniors are comfortable with one another and can take this as an opportunity to have some fun before their junior year really gets rolling. And for the seniors, Homecoming is a bittersweet experience: they get to celebrate it as the class on top after surviving two years of IMSA, but it’s their final hoorah together and a reminder that soon, they’ll be gone. However, regardless of its meaning to individual classes, Homecoming brings the entire IMSA community together for a week of unforgettable excitement.

Thank you to Student Council for running yet another successful Homecoming Week!

Clash of the Halls in Review, Day 2

Be the first to comment on "Homecoming Week at IMSA"