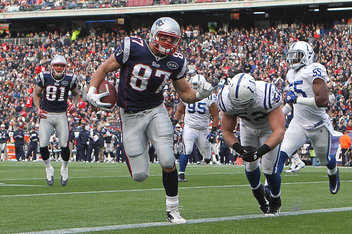 It’s National Turkey Week! You know what that means… FOOTBALL! Anyway, in the spirit of Thanksgiving, I’d like to address a couple things that I’m thankful for. Firstly, I am thankful for parity. As an example, the Jaguars almost defeated the Texans. Such competitive matches week in and week out is one of the reasons I love the NFL. Secondly, I am thankful for quarterbacks. We saw their value in the previous Monday night game, featuring two backups. – Agnel (writes for the odd-ranked teams)

The season is going by too quickly! With all the bye-weeks through and 11 weeks down, we have an idea of who each team is.  Teams with high preseason hopes such as the Eagles have fallen down to earth, while teams such as the Colts have had surprise success. Throughout such disappoints and surprises, the playoff picture starts to come into focus.  We have entered the zone where each game is a must-win with everything on the line.  Most importantly, my rankings are coming together.  Last week, no team in the top 15 lost to a team in the bottom 15.  The only losses inside the top 15 were the Steelers to the Ravens, Bears to the 49ers, and Colts to the Patriots.  That sounds like effective ranking! Enjoy your Thanksgiving breaks, knowing you’re in good hands. –Mason (writes for the even-ranked teams)

So, you almost lost to the lowest ranked team in our rankings last week? No problem, you still shattered some records while you were at it.

Acing five wins in a row has given them the division lead back.  The Packers have beaten good teams this year and have another opportunity to prove themselves this week against the Giants.

I know they could very well still be undefeated, but Matt Ryan needs to stop turning the ball over. Throwing five interceptions in a single game is unacceptable.

Kaepernick had the best QBR (quarterback rating) out of any quarterback debuting in the past five years as he dismantled the Bears.  This team has now beaten key conference opponents, such as the Bears and Packers, and looks to continue with the New Orleans Saints this week.

The Ravens barely managed to beat the Steelers without Ben Roethlisberger, which is a cause for concern.

The Bears’ win streak has turned into two losses, but everyone must realize that the team depends on Jay Cutler.  The pace of the offense is essential for the defense; the field position of the defense is necessary for the offense.  The perfect balance is disturbed when one side is taken away completely, and, as a result, the whole unit came apart.  A win against the Vikings is vital.

The Patriots just seem to have a way of showing unprepared or incapable teams just how bad they are. The Colts were that team last week. However, with Gronkowski out for at least the rest of the regular season, this train could come off the tracks.

Also  on a five-game winning streak, the Broncos are locking up their division.  We will see if McGahee’s absence affects the team.

Well, they moved up simply because the Steelers lost. They have a tough stretch ahead of them which could put their playoff hopes in jeopardy if the Cowboys catch fire.

With a backup quarterback in, the Steelers lost to their arch-rivals this past week.  The Steelers are one of the teams most reliant on their quarterback’s health.

They came back from a 3-quarter deficit. The fact of the matter is that when Doug Martin and Josh Freeman are playing at a high level, it will be extremely hard to beat the Buccaneers.

Coming off a dominant win over the Jets and a bye week, the Seahawks need each game in order to catch the 49ers for the division.

They are back at .500 for the first time since last season. I’m starting to grow fond of them quite honestly.

Do yourself a favor and look up A.J. Green’s catch from the past week.  The Bengals’ offense is going to look great against the Raiders this week.

Once again, the win was not really impressive because it was against the Browns. Until they can string together a few impressive wins, they cannot be considered a legitimate contender.

Can the Vikings have a chance at the post-season in this powerhouse division? No.  Let them try, they would need the win this week against the Bears.

Last week, Mason said that they were going to deliver a nail-biter against New England. Well, that did not happen but they should have a really good estimate of what they have to do going forward.

Two divisional losses in the last two weeks have dismissed Detroit’s playoff hopes, and the city does not have hockey to redeem them.

They kept it close against the Broncos. That has to count for something, right?

Special teams is very important in the NFL, don’t ever overlook it.

It takes a lot of skill to get dominated by the Jets, but the Rams somehow managed it one week after tying the 49ers. I’m not sure anybody knows what to expect from this team on a week-to-week basis.

You can’t lose to the Titans and Bills and expect to be perceived as a threat.

If the Redskins somehow finish 5-1 for the rest of the season and the Giants collapse, they have a decent shot of making the playoffs. Well, it’s good to dream at least.

A nice 34-point win over the Dolphins and the return of Chris Johnson (fingers crossed) will make their games more interesting, but they are still ranked lowly for a reason.

A final record of 4-12 is looking more and more likely every week.

So many backup quarterbacks last week. The Eagles without Vick, McCoy, and a defense are not threatening.

As I was watching their game against the Cowboys last Sunday, I realized that this team has a lot of heart. They don’t have the wins but they definitely don’t give up.

Be happy; you took the Buccaneers to overtime!  Be sad though, you’re 2-8.

I love that,when Mark Sanchez throws for only 178 yards, it’s considered a “good” performance. At least he avoided throwing an interception.

Naming Henne and Jalen Parmele starters should lead to some fun.  Also the Jaguar’s defense shut down Arian Foster!  The last ranked team took the first ranked team to overtime.  The Jaguars usually have awful run defense and passing offense, while the Texans usually run the ball and stop on defense.  The complete opposite happened this past week.

They could not even stop the Saints’ running game, which is simply pathetic.

The Chiefs are the bottom of the league.  Are they a threat at all? I would say no, not unless they decide to use Jamaal Charles, throw to the tight end, and also get a defensive or special teams touchdown.

Be the first to comment on "NFL Power Rankings: Week 12"