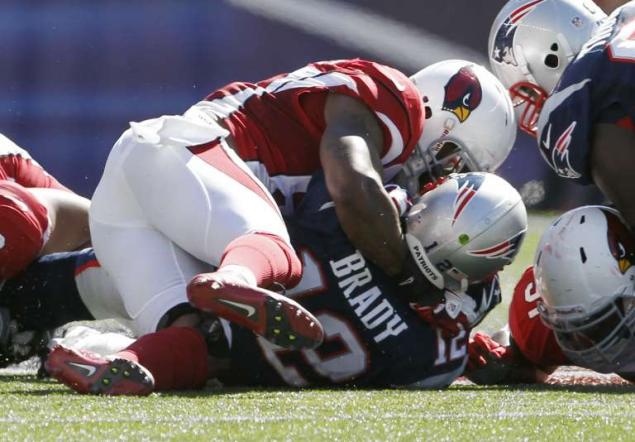 Wow, what a week in football! From the Patriots being upset by the Cardinals (what?!), to the dominance of the 49ers and continued struggles of the Saints, we have plenty to discuss and debate about already, and the season has barely begun! Starting this week, I will post my Power Rankings for the week. Like them? Hate them? Post your comments below, shoot me an email or simply talk to me in person about what you think.

If the 49ers’ offense keeps putting up 30 point games and their defense remains historically effective, I can’t think of any team that can stop them. Alex Smith’s development progresses right before us.

With the Patriots suffering an embarrassing loss, the Texans are definitely the favorites in the AFC. And much like the 49ers, the defense is the reason.

Containing Peyton Manning so thoroughly  is quite the accomplishment. Also, Matt Ryan has been flawless in these first two games. However, their defense is the only area that they could use significant improvement.

That offense is still sputtering; however, they did face two of the best defenses in San Francisco and Chicago. So, they should be given a bit more time before panic ensues.

While they are undefeated, I’m going out a limb ranking them this high. Vick needs to keep himself healthy and ball in the hands of his receivers. But they beat…

I would have had the Ravens as the favorites of the AFC in place of New England but they couldn’t capitalize on those two Vick interceptions. BREAKING NEWS: Flacco looked ordinary. Again. Speaking of New England…

That was something. As a Brady fan, seeing him that uncomfortable and imprecise was scary. With one half of Gronknandez out for a few weeks, keep that panic button close. Still, their run defense looks like a solid, top -5 unit.

Impressive wins two weeks in a row. Rivers isn’t putting up great numbers yet but once he does, WATCH OUT!

Pittsburgh may have just initiated the end of Mark Sanchez’s career. Their defense still looks pretty good despite its age.

Peyton Manning does not equal 16-0. Calm down, Denver. They almost pulled out the comeback against the #3 team so I think they are going to be ok.

I have found that it is utterly pointless trying to analyze how well they are doing early in the season. It always seems to end on the opposite note. Trust me. People were writing them off at this point in 2007 and 2011 and we know how those seasons ended.

So you beat the Super Bowl champs and then fall to a rookie quarterback. Hard to rank you when you do that. In terms of the game itself, they ran into a wall (49 Rushing yards). Ouch. The secondary did its job though.

Despite a strong week 1, it’s the same old story in Chicago. As long as Cutler is on his back more than he is completing passes, da Bears will not be a serious threat deep into the playoffs. Forte’s injury is another story line to monitor.

Too many odd things happened in their win. Let’s start with the end. They beat the Patriots after a missed field goal, which was set up by an inexcusable fumble… as they ran out the clock. After holding the formally undefeated-in-home-openers Patriots to 18 points. But all in all, this defense is legit even though the offense is another story.

The Lions are explosive yet streaky. A week removed from barely escaping the Rams, they fell to the clearly league-best 49ers. This team has potential but that defense has to get better and Stafford has to quit throwing interceptions.

After that demolition during Monday Night Football, you had to figure that they would bounce back. Well, they kind of did. Yes, they won, but in the process gave up more than 300 yards passing to a rookie quarterback. My faith in Andy Dalton and AJ Green is the only reason they are 16.

After that supernatural performance from Mark Sanchez against the Bills, you had to know that this was the game they were going to be brought back down to Earth. Sanchez is going to have to do more than that regardless of who he is playing if he wants to stave off those Tebow chants.

Marshawn Lynch went into beast mode against the Cowboys and Russell Wilson doesn’t look half bad. Also, their defense is obviously stacked. So, what is holding them back in these rankings? As of right now, it’s the loss to the Cardinals. However, that could easily change depending on their performance this week against Green Bay.

Beating the Saints doesn’t seem to carry the same ring it did last year but in the end they bested Drew Brees. Cam Newton did just what he needed to in last week’s game: keeping the turnovers to a minimum. If that defense becomes more consistent they could challenge for the wildcard this year.

Almost taking out the Super Bowl champs? That’s a start in terms of rescuing the ship that was sinking last year. Josh Freeman is looking more like the Freeman from two years ago. The defense has some work to do in the secondary but they are definitely getting it done against the run.

Similar story to the Panthers. In fact, they almost look better because of the offense thus far. However, having a rookie has to catch up to them at some point. RGIII looked ordinary passing-wise this week but pretty good on the ground. The defense needs to stop giving up so many points, though.

St. Louis could easily be 2-0 right now and in all honesty should be. But, there are some issues on defense that need to be sorted out including how to not give up so many points and yards. At least Sam Bradford is healthy and playing like the type of player he is expected to be.

Buffalo’s passing game still looks anemic but at least they rebounded after losing to the Jets. Mario Williams finally did something (a fumble recovery) but needs to start playing up to that huge contract. That running game is a beast and that should keep them in the playoff conversation.

After a three interception game, Tannehill did just what Miami needed him to do: keep the football out of the opponent’s hand. Their passing defense needs work but their rushing defense is getting the job done. It is a transition year after all.

Andrew Luck isn’t making the big splash so far that RGIII has made but he is doing his part. No turnovers in last week’s game is just the kind of performance he needs to put up all year. This team isn’t good enough to make the playoffs which then turns the focus on his development.

Just because Adrian Peterson is back doesn’t mean that all the issues with this team are going to go away. They have a good young quarterback in Christian Ponder and need to build off of that this year.

Drew Brees is not going to be effective as both the pseudo-head coach and quarterback. At the very least there are going to be growing pains as we are seeing right now. If they can get more balanced and improve on defense, they may have an outside shot of salvaging a decent season.

Two blowout losses to two far superior teams. So the story here is much the same as the story for Vikings and Colts. Build off of Jake Locker’s progression. The running game has to improve or Chris Johnson and his big contract will get a huge reconsideration after this year. Same with the entire run defense.

This team has potential but is underperforming in both phases of the game. They need to give up less points and yards even if their offense starts performing up to its capacity. At the very least, Matt Cassel needs to stop turning the ball over.

Blaine Gabbert is trying to play something resembling football this year and so far he has been spotty at best. He needs to do better if he expects to stave off the replacement talk. That defense needs to be better as well but that may just be too much to ask.

If Darren McFadden starts to play like he is capable of doing this team may become decent. Carson Palmer is putting up huge yards but is not scoring points. But then there is that defense…

Remember to post your comments below. Maybe even give me your version of the Power Rankings. In any case, enjoy this week’s football action!

Be the first to comment on "NFL Power Rankings: Week 3"