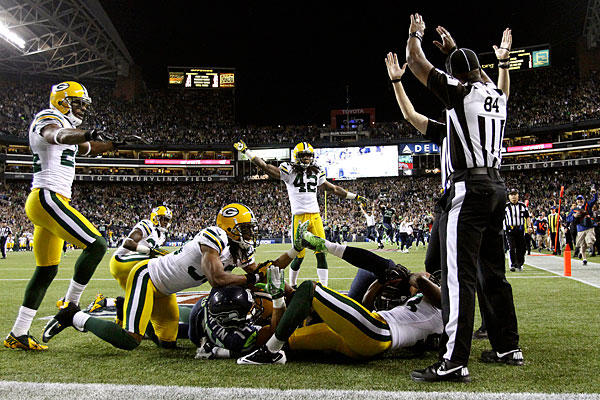 The refs are back! Additionally, along with them comes along a new week in football as well as plenty of new questions mostly revolving around who is and is not legitimate. Are the 49ers legit? What about the Patriots? The Packers? The Texans? The Cardinals? This week will hopefully provide more clarity to an extremely confused football landscape right now.

The two headed monster in Arian Foster and Ben Tate ran them up to the number one spot in these rankings. Honestly, they are probably the best team in the NFL as they have not demonstrated significant weaknesses. However, as Texans fans know, injuries can change that quickly

The number one spot in the NFC is officially up for grabs and Atlanta looks like they could  take it.  The scary part is…they haven’t even been putting up gaudy stats yet.

Sorry. You can’t lose to the Vikings and expect to be called far and away the best team in the NFC. Like I said last week, they need to put up a decent number of points in order to be a truly scary team.

Baltimore squeaked one out Sunday night but beating the Patriots regardless of the circumstances is an accomplishment. Joe Flacco played marvelously and the defense contained a rejuvenated Patriots offense. The trick for the Ravens is to keep up this pace all season long.

The Cardinals are a good football team and there is no getting around that. However, their offense needs to be consistently effective as they were last week. If they want to be true contenders, they cannot completely rely on their defense.

When you destroy a team as thoroughly as they did with backups playing critical roles, then, regardless of the opponent, you know that they will be dangerous. As I mentioned last week, do not count the Giants out early on in the season!

Going from first to 20th in passing yards will lead to a losing record. Considering the offenses they have played, their 1st ranking in pass defense isn’t particularly impressive either. However, they should be 2-1 and it’s great that the replacement referees will no longer be a factor.

There is always those one or two teams that I rank higher than I probably should and the Bengals are one of them. However, this team is starting to feel like the Patriots of last year: amazing offense and suspect defense. One problem with that comparison, however, is that Andy Dalton is nowhere near Tom Brady. Not yet.

Speaking of teams I may be ranking too high, the Cowboys may be another example. Bottom line is that this team is talented on both sides of the ball and needs to live up to it week in and week out.

Remember when I warned that Phillip Rivers putting up stats leads to this team being very dangerous?  Well, now we know what this team looks like when he doesn’t put up any stats at all. Not good.

How about that finish! Forget the fact that it looked like the refs were making more questionable (or flat out wrong) calls than Congress. Let’s just sit back and appreciate the fact that the Seahawks are 2-1 with a rookie quarterback.

Last week I had them ranked highly just because of the scoreboard. Well, the scoreboard spoke again and the verdict it handed down wasn’t good. Michael Vick needs to stop turning the ball over in order for the Eagles to fulfill their potential.

Only the Bears can make a decent football team beating a mediocre one by 17 points look like an achievement. The fact of the matter is that this team does not yet have the explosiveness and consistency to be considered great.

Once again we need to keep this two game losing streak in perspective. They lost to the two best teams in football. In fact they almost came back against both. The bottom line is that their defense needs to recapture the magic they had at the end of last year.

Honestly, they should be ranked lower but their defense is still quite good. However, they lost to Oakland after leading by 10 going into the fourth quarter. Who does that?

Overreaction? Maybe, but I just don’t like what I’ve seen from them thus far. Their offense just isn’t the same and Tom Brady is taking far too many hits. Solution? For starters, getting Rob Gronkowski more involved in the passing game would surely help.

They squeaked out a win against the Dolphins which doesn’t exactly build confidence. Mark Sanchez put up a lot of yards but also turned the ball over. Also, the defense could not stop the run.

Pretty much the same story here. Two wins in a row over mediocre teams is not showing us what they are truly capable of, although I must say that overall, they are beginning to look like a formidable team. CJ Spiller’s injury may hurt whatever little progress they have made, though.

That is the kind of win that defines a season for a team. If they can keep that up, they have a reasonable shot at contending for a wildcard spot. Christian Ponder did exactly what he needed to do and the rest was handled by the running game. Their defense doesn’t look too bad either.

Matthew Stafford is putting up big numbers and Calvin “Megatron” Johnson is the leading receiver in the NFL. So, what’s wrong? Hard to say, but the defense and turnover differential seem to raise a red flag.

Putting up 34 points against the Steelers’ defense is an accomplishment. Oddly enough, the game in which Carson Palmer did not throw for over 300 yards is the same game in which they amassed an impressive 34 points.

Finally a win for this team and it came against a dangerous Lions team. Surprisingly, it came on the arm of Jake Locker. However, Chris Johnson continues to underwhelm. Recently, he has been out-shined by his quarterback, Jake Locker, in the running game. That is simply unacceptable.

Add them to the list of people beating the Saints that is growing less and less exclusive every week. Still, Matt Cassel out threw Drew Brees, an accomplishment which the defense should get credit for as well. The running game is also performing extremely well.

Blaine Gabbert may not be a great quarterback but he sure was clutch last week against the Colts. Maurice Jones-Drew had his best game since coming back from his holdout which should bode well for the rest of the season.

The offense was nonexistent and that’s all there really is to say about them right now. Their defense did a good job containing the Bears, though as we have seen, that isn’t saying much.

They let what was probably their best chance at beating a really good team go due to their stagnant offense. Their defense needs to do a better job at defending the pass, but that has been a problem for quite some time.

Cam Newton is suffering from a sophomore slump and the sad thing is that the only reason they were interesting to watch last year was him. Their defense is still giving up too many yards and points.

RGIII mania is not going to die away at any point in this season and after last week it really shouldn’t. He has been playing very well and should continue to impress. The issue comes down to that fact that their defense has severely under performed thus far.

Andrew Luck saw his second win slip away on a clutch pass from Blaine Gabbert. That doesn’t take away from the fact that he almost won two in a row. Good progress all said and done.

Despite a running game that completely demolished the Jets defense, they came away with a loss. Their run defense is legit but otherwise we can probably put the majority of the blame on the defense. However, they did almost squeak it out and should view this as progress.

Quite honestly they are this low because of the negative air that is surrounding them. They have a decent team but they are playing from behind in each of these games and those are tough ones to lose. I don’t like the outlook for this team at all.

This is definitely the worst team in football right now. On the bright side, they definitely have some potential and should move from this spot before the end of the season.

Remember to post your comments below. Maybe even give me your version of the Power Rankings. In any case enjoy this week’s football action!

Be the first to comment on "NFL Power Rankings: Week 4"