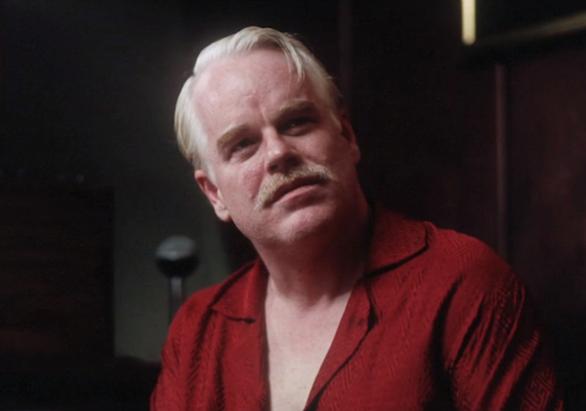 Philip Seymour Hoffman is The Master

Summary: Freddie Quell (Phoenix), an emotionally damaged veteran-turned-mindless-drifter finds new purpose in life after he meets Lancaster Dodd (Hoffman), better known as the “Master”, a jack-of-all-trades and founder of a cult-like philosophical movement called “The Cause”.  Quell soon finds himself Dodd’s right hand man, traveling with him and his family as they spread his message across the country, much to the displeasure of Dodd’s family members—especially his controlling wife, Peggy (Adams).

Review: If you’re familiar with the work of Paul Thomas Anderson, The Master will not come as a surprise, whether it be the length (long), tone (bleak), or pacing (if it were any slower it would go backwards). If you’re not familiar with Anderson, however, it’s safe to say you’ve probably never seen anything like it before. Now, while my earlier description doesn’t exactly paint a flattering picture, Anderson is considered one of the greatest working directors.

Anderson’s polarizing brilliance comes not from what is said or shown on screen, but what isn’t. While his intentional ambiguity drives some crazy (the ending of Inception, anyone?), others love it and the intellectual discussion sure to follow. And, if The Master is anything, it is intellectual—even more than Anderson’s usual fare. While the film has many universal themes, such as sanity, friendship, trust, and religion, there is one underlying, unspoken, specific theme: Scientology, and its founder, L. Ron Hubbard.

While Anderson’s “Master” might not have Hubbard’s name, they have far more similarities than differences, from their backgrounds (science fiction writing), to specific events (Dodd’s son tells Quell at one point that his father is just “making it up as he goes along”, much like Hubbard’s own son, who called him a fraud) to several details of their respective movements. While this fascinating parallel adds a whole extra dimension to the film, it stands strong on its own, giving it a fascinating, timeless quality.

I must give a few warnings, however. First, there is a lot of nudity in this film—too much, for my taste at least. Second, there is a rather disturbing, and, in my opinion, unnecessary, background story involving a relationship between Quell and a 17-year-old named Doris, who looks more than young enough to be his daughter.

However, as long as you can handle those two iffy subjects I would recommend giving The Master, and Paul Thomas Anderson, a chance. The performances are phenomenal, and while it may not be your cup of tea, it is definitely a new experience worth trying.

Be the first to comment on "Film Review: The Master"