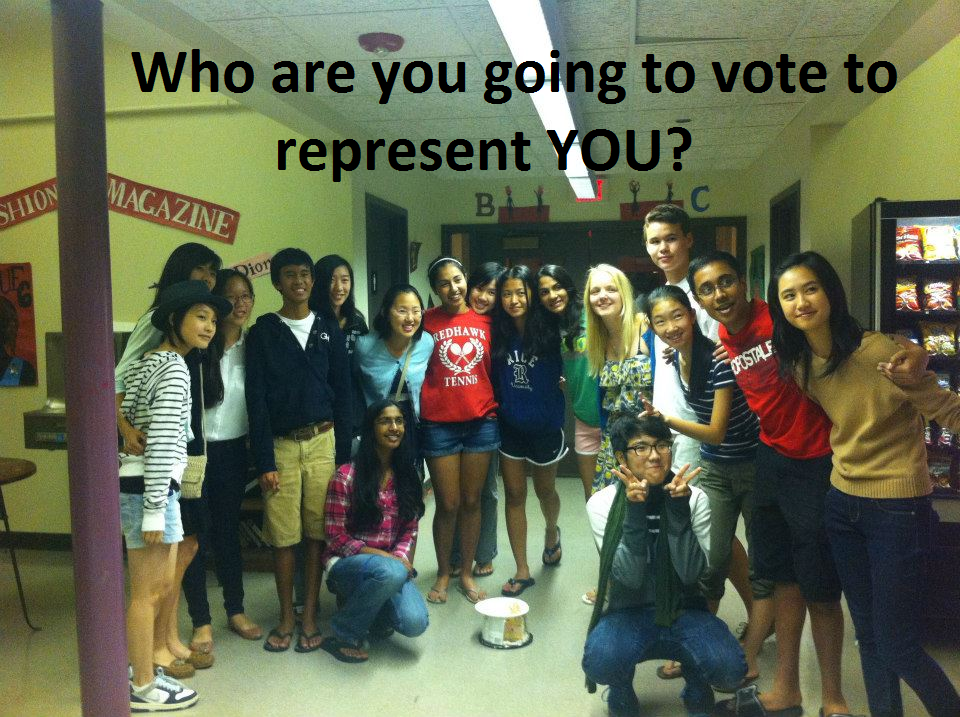 Eighteen candidates applied for the position of Sophomore-at-Large. We are now down to our six final candidates running to be your representative. In the end, only two will remain. Do you think they have what it takes to stand for you?

The candidates for the Class of 2015’s Sophomores-At-Large are as follows:

This past week, the candidates have been campaigning using posters as a way to inform us of what they plan to do if elected. Elections will be on Monday October 1st, 2012 starting at 7:15 P.M. in the auditorium.

The Sophomores-at-Large essentially represent the Class of 2015. It is their job to make sure that the sophomore class’ voice is heard during the discussions at Student Council meetings. Additionally, they are also responsible for talking to administration about sophomores’ suggestions and concerns. Most importantly, it is their job to lead us to a great sophomore year.

Furthermore, they are in charge of running the Sophomore Class Club elections. They send out the applications, may conduct interviews, and eventually choose the candidates that will advance to the final stage of speeches.

While it is important that the Sophomore at Large candidates convey the class’ ideas to improve our school, it is imperative that they come to the post with many ideas of their own. This differentiates the candidates from an adequate representative to a truly great representative.

The candidates had to first collect one hundred signatures from fellow sophomores who believed that the potential candidate would be acceptable for the position. Once a hundred people believed in the specific applicant, they were given an application and were contacted for an interview. The application included a compilation of many questions, each question testing the candidate’s abilities and thought process. On the other hand, the interviews were brief (although thorough) and lasted about 10 minutes each. Out of the eighteen applicants, six remain eligible. Throughout the past week of campaigning, they had to follow several guidelines, such as the limitation of two large posters and seven fliers.

The candidates have worked really hard to show you that they are the right choice for the job. It is now up to you to choose two candidates that you believe will lead the sophomore class effectively. Don’t forget to vote on Monday October 1st, 2012 in the Auditorium at 7:15. It is now time to do your duty.

Be the first to comment on "Who Will Represent the Sophomores?"